Yasay’s confirmation in peril over renunciation of US citizenship 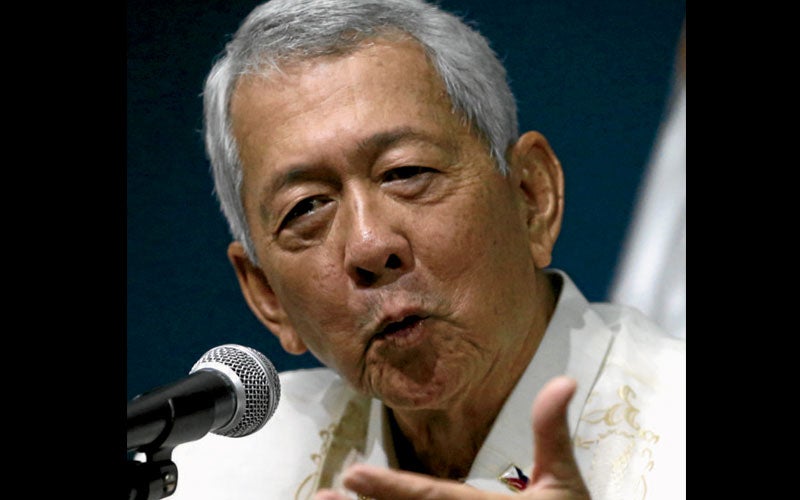 MANILA — Foreign Affairs Secretary Perfecto Yasay Jr.’s chances of being confirmed for his Cabinet post may be affected if it’s proven that he was once an American citizen who had to renounce it only last year, according to a ranking Commission on Appointments member.

Rep. Abraham Tolentino, committee assistant majority leader of the Commission on Appointments, said Yasay had not formally submitted the “certificate of loss of nationality of the United States.”

The document, obtained by the Philippine Daily Inquirer, showed he only renounced his citizenship on June 28, 2016, two days before President Rodrigo Duterte appointed him to his Cabinet.

“If proven na ganun… meron talagang effect yun (that will definitely have an effect),” Tolentino said of Yasay’s chances to clinch the confirmation.

He noted that Yasay’s citizenship was already “being questioned in the hearing” last week, even before the Philippine Daily Inquirer published the document this weekend.

Tolentino moved to suspend the Feb. 22 session over his committee mates’ request for more documents to ascertain Yasay’s citizenship, even as he asserted that he has “never legally acquired American citizenship.”

After the Inquirer reported on his renunciation, the pronouncement drew speculation from several senators that he might open himself to a perjury charge for lying under oath.

Tolentino said he would not deem Yasay liable for perjury for now. He said Yasay could have “strong evidence in his defense.”

Tolentino also cited Yasay’s argument that he did not complete his residency requirement after seeking naturalization in 1986.

That statement was already cited in a Feb. 23, 1993 affidavit Yasay submitted to the Commission on Appointments. It read that while he “was granted United States citizenship” on Nov. 24, 1986, his decision to return to the Philippines within a year made him “ineligible and disqualified for such citizenship.”

Tolentino also echoed the argument that while Yasay held a green card, permanent residency status did not equate to American citizenship.

He also noted how Yasay was able to run for senator and even vice-president, which meant the Commission on Elections accepted his Filipino citizenship.

Tolentino said these issues would be raised during the resumption of Commission on Appointments’ hearings.  SFM