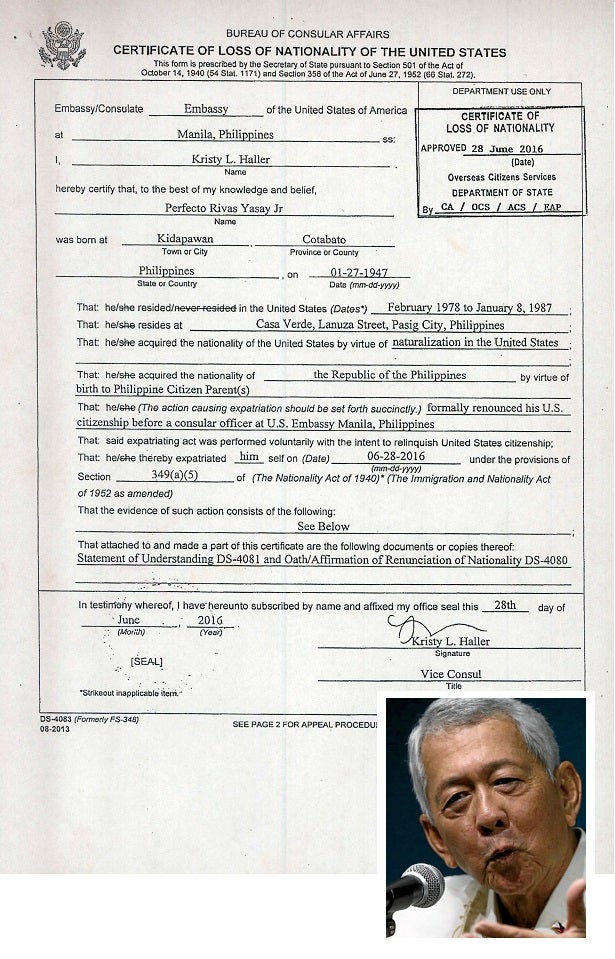 The image above shows Page 1 of a scanned copy of the Certificate of Loss of Nationality of the United States issued for Foreign Affairs Secretary Perfecto Yasay Jr. (inset). It was issued on June 28, 2016, or two days before he was appointed to the Cabinet of President Rodrigo Duterte. Page 2 of the certification and other documents related to Yasay’s renunciation and loss of US citizenship are posted at the end of this article.

While he declared before the Commission on Appointments (CA) that he had never been an American citizen, an affidavit executed by Foreign Secretary Perfecto Yasay Jr. showed that he acquired US citizenship and took his oath as an American citizen in 1986.

After supposedly giving up his US citizenship in 1993, Yasay failed to reacquire his Filipino citizenship, making his position as head of the Department of Foreign Affairs (DFA) and his previous seven-year stint at the Securities and Exchange Commission (SEC) questionable.

Documents obtained by the Inquirer showed that Yasay formally renounced his US citizenship at the US Embassy in Manila on June 28, 2016, or just two days before President Duterte appointed him to the Cabinet.

LOOK: Yasay affidavit and other documents

At his CA confirmation hearing on Wednesday, Yasay said he had applied for naturalization but never legally acquired American citizenship.

“And in 1987 of January, a few months thereafter, I, in fact, abandoned my permanent residency in the US that rendered me under the laws not qualified to become a US citizen. On that basis, I have never acquired legal status as a US citizen and I have issued the necessary affidavits for this purpose, admitting my disqualification that I submitted early on to the American authorities,” he said.

Mr. Duterte’s spokesperson, Ernesto Abella, said Yasay’s foreign citizenship was a nonissue as he had already explained the circumstances behind it. “He was never ever a US citizen,” Abella said.

But Yasay’s own documents stated that he was granted American citizenship and that he took his oath as a US citizen.

In fact, Yasay personally appeared before Vice Consul Kristy L. Haller at the US Embassy in Manila on June 28 last year to formally renounce his US citizenship.

A certificate of loss of nationality of the United States was issued stating that Yasay “formally renounced his US citizenship before a consular officer at the US Embassy Manila” and that the “expatriating act was performed voluntarily with the intent to relinquish United States citizenship.”

The certificate said Yasay “resided in the United States (from) February 1978 to Jan. 8, 1987.” His wife and children are US citizens.

To support the renunciation, Yasay submitted an affidavit and a letter that he said he sent by registered mail to the US Immigration and Naturalization Service (INS) in 1993.

He said he migrated to the United States in February 1978 under Alien Registration No. A36118516 to “flee the repressive regime of Marcos.”

Soon after the dictator Ferdinand Marcos was overthrown in 1986, Yasay said he visited the Philippines to witness the developments and to make a decision whether to return to his country of birth.

Very pleased with the restoration of freedom and democracy in the Philippines, Yasay said he decided to return for good.

“That, by the time I took my oath as a United States citizen on Nov. 24, 1986, I already finalized my plans to return to the Philippines and abandon my residency in the United States,” he said in the affidavit.

He added that he abandoned his US residency on Jan. 8, 1987, and returned to the Philippines.

In both the affidavit and a transmittal letter to the district director of the INS, Yasay confessed he did not really intend to reside in the United States.

“I further make this final and irrevocable admission and confession to the effect that when I applied for and was granted US citizenship, I did not have the acquired intention to reside in the United States, thereby making me ineligible and disqualified for such citizenship,” Yasay said in the letter to the INS. (In this letter, he stated the date of his US citizenship as Nov. 24, 1986, but in the affidavit, he wrote it as Nov. 26, 1986.)

There was no indication that the affidavit and letter were received by the US agencies. The affidavit was notarized by a certain Arturo Diaz.

While Yasay cited this affidavit as abandonment of his US citizenship, it was not the proper procedure for renunciation.

The US Immigration and Nationality Act requires a person wishing to renounce his or her US citizenship to appear before a US consular or diplomatic officer outside the United States and sign an oath of renunciation.

He executed this instrument only last year shortly before his formal appointment to Mr. Duterte’s Cabinet.

Another curious aspect of the Yasay citizenship is that between his acquisition and renunciation of his US citizenship, he was issued both Philippine passports and US visas.

A lawmaker privy to the pertinent documents said that after Yasay lost his Filipino citizenship in 1986, he has apparently not reacquired it as mandated by Philippine laws.

The lawmaker pointed out that assuming Yasay did renounce his US citizenship in 1993 through his affidavit, he did not automatically reacquire his Filipino citizenship.

To become a Filipino citizen again, Yasay needed to file and complete the procedures for naturalization as required under Commonwealth Act No. 93 and Republic Act No. 9225, or the dual citizenship law enacted in 2003.

The dual citizenship law requires filing a petition for retention/reacquisition of Philippine citizenship in the Bureau of Immigration and taking an oath of allegiance to the Philippines.

The lawmaker said Yasay executed the affidavit and letter to US authorities in 1993 apparently to cover his tracks at the SEC.

Yasay was first appointed associate SEC commissioner in March 1993, a month after the date of the execution of his affidavit. He became SEC chair in 1995 and held the post until 2000.

“He wanted to cover his tracks. At the time he accepted the appointment as associate commissioner of the SEC, he knew he was an American citizen,” the lawmaker said.

The lawmaker said Yasay could have taken his oath as a Filipino when the dual citizenship law was enacted in 2003, but apparently he did not.

Under the new law, Yasay as a US citizen is required to take his oath of allegiance to the Philippines before he could serve in the Cabinet.

Elective and appointive government officials cannot be dual citizens. If they are, they are required to take an “oath declaring his intention to renounce absolutely and perpetually all faith and allegiance to the foreign authority, state or sovereignty of which he was a citizen or subject” and take an oath of allegiance to the Philippines before they could run for public office or hold government posts.

The lawmaker pointed out that Yasay would be liable for usurpation of authority for being an alien during his SEC tenure.

Now that he has formally renounced his American citizenship, Yasay could be considered a “stateless” person holding office, ironically, as foreign secretary.

The Inquirer tried to reach Yasay through phone over the weekend. Text messages sent to him were left unanswered as of Sunday night. 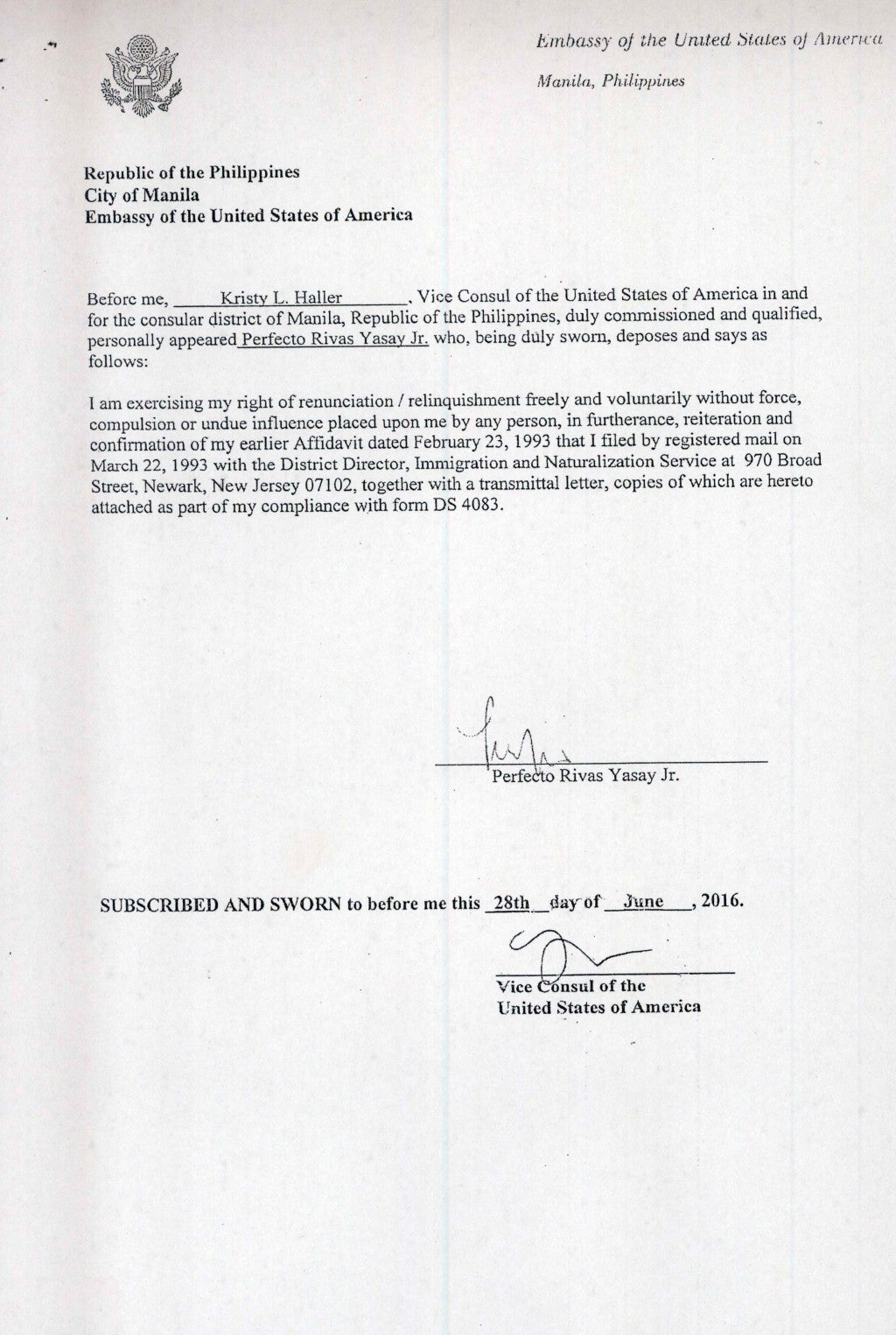 Page 2 of the Certificate of Loss of Nationality of the United States issued to Perfecto Yasay Jr. by Washington’s embassy in Manila. 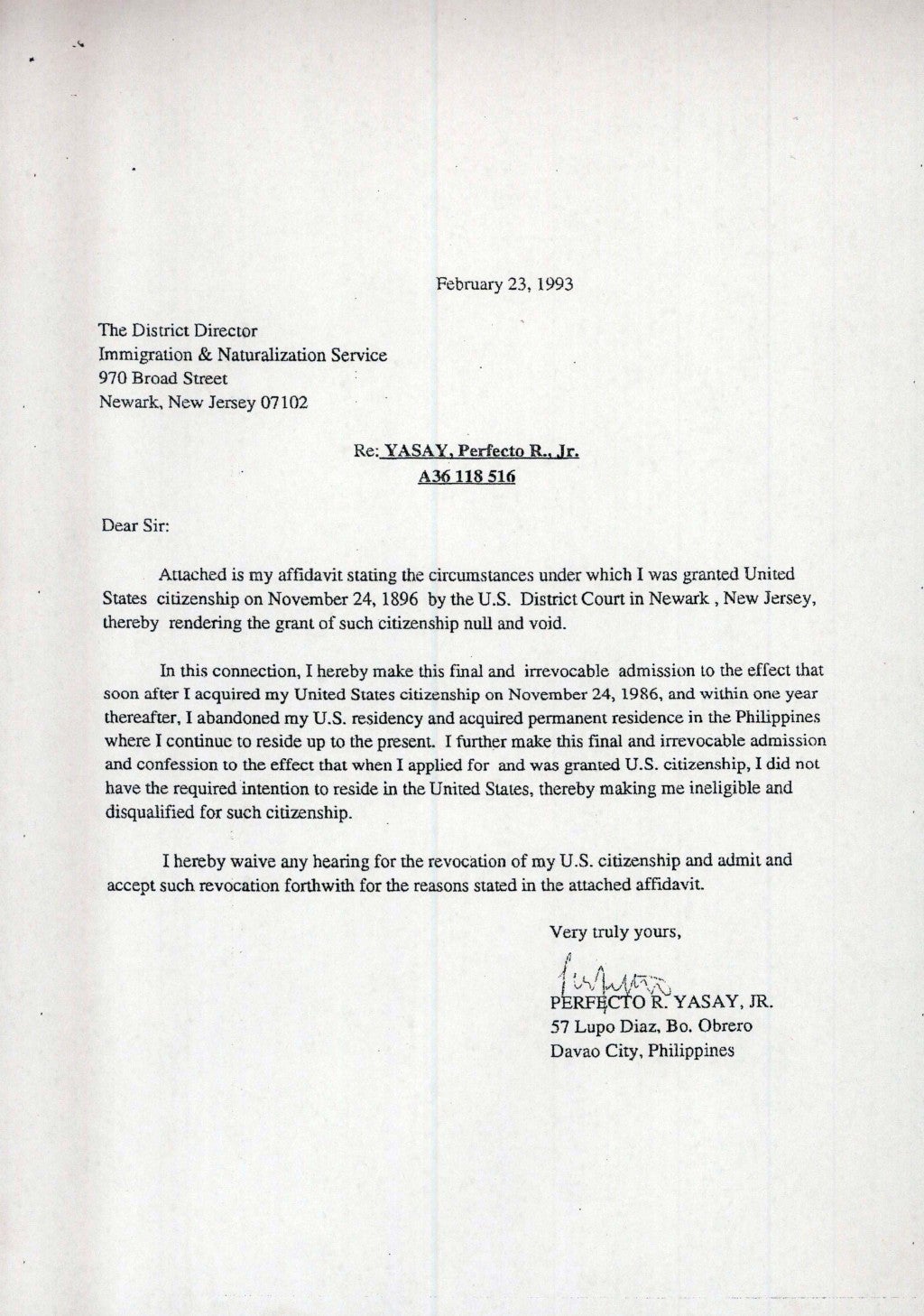 The image above shows the letter of now-Foreign Affairs Secretary Perfecto Yasay Jr. to the Immigration & Naturalization Service of the US on Feb. 23, 1993, when he said he was abandoning his US citizenship. 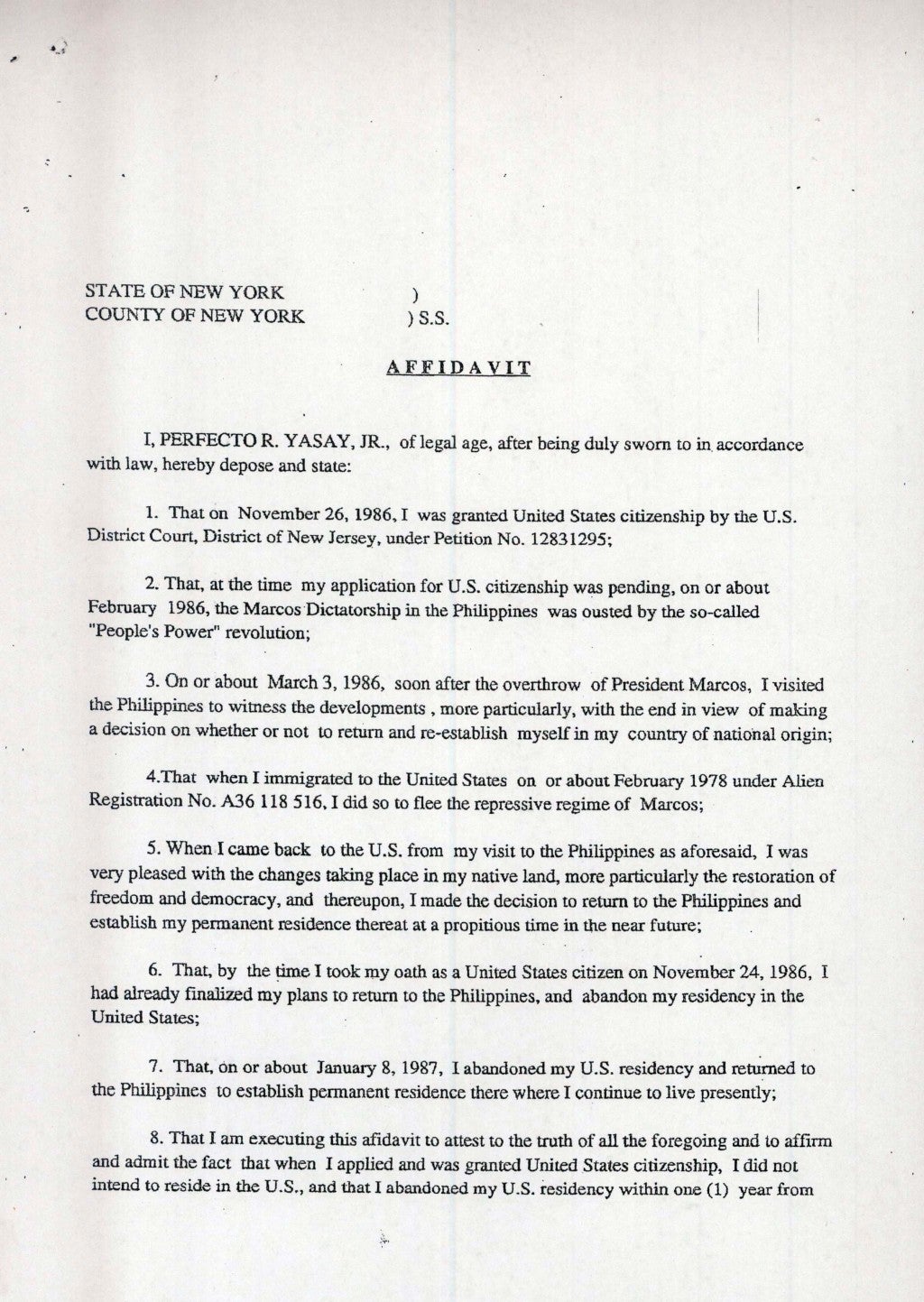 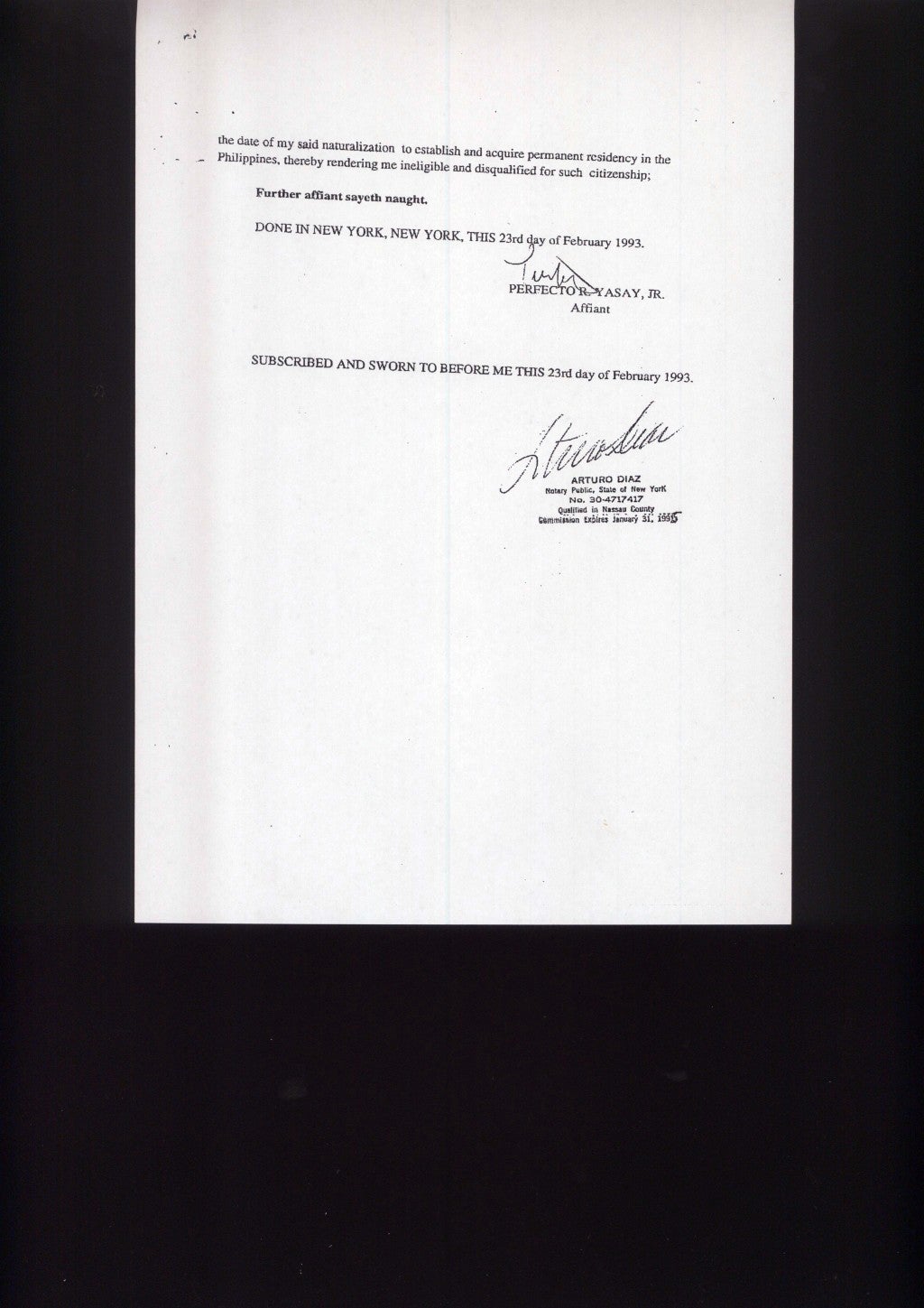