Amnesty blames Trump, Duterte, others in global rollback of rights 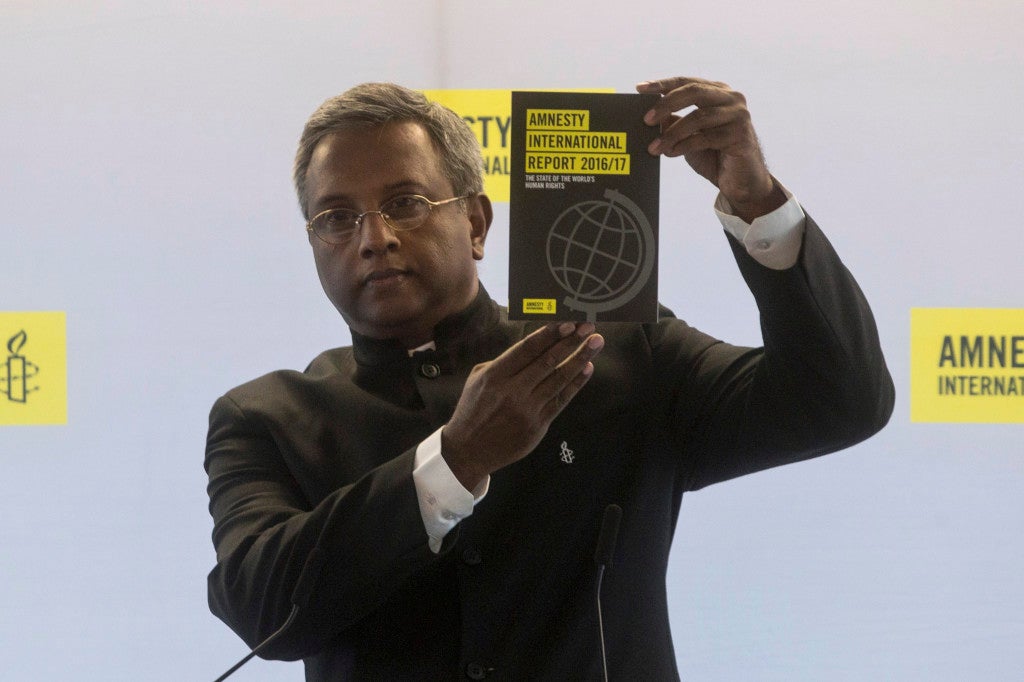 PARIS — Amnesty International says “toxic” fear-mongering by anti-establishment politicians, among them President Donald Trump and the leaders of Turkey, Hungary and the Philippines, is contributing to a global pushback against human rights.

Releasing its 408-page annual report on rights abuses around the world Wednesday, the watchdog group described 2016 as “the year when the cynical use of ‘us vs. them’ narratives of blame, hate and fear took on a global prominence to a level not seen since the 1930s,” when Adolf Hitler rose to power in Germany.

“The limits of what is acceptable have shifted. Politicians are shamelessly and actively legitimizing all sorts of hateful rhetoric and policies based on people’s identity: misogyny, racism and homophobia. The first target has been refugees and, if this continues in 2017, others will be in the crosshairs.”

The White House did not respond to a request for comment on the report.

In the Philippines, Duterte’s spokesman, Ernesto Abella, said the president has recently toned down his rhetoric. Duterte has previously said he would be “happy to slaughter” 3 million drug addicts and talked of fattening fish in Manila Bay with corpses. Duterte’s crackdown on illegal drugs is feared to have killed more than 7,000 mostly poor drug users and petty drug pushers since he took office last June.

Abella told the ABS-CBN TV network that Duterte “does listen and he’s not just frothing in the mouth.”

“There is anger coming there, but to refer to it as toxic as if it was a planned thing … that he wanted to destroy people, I think obviously misses the mark,” Abella said.

Amnesty’s annual report, “The State of the World’s Human Rights,” documented what it called “grave violations of human rights” in 159 countries in 2016.

It said governments “turned a blind eye to war crimes, pushed through deals that undermine the right to claim asylum, passed laws that violate free expression, incited murder of people simply because they are accused of using drugs, justified torture and mass surveillance, and extended draconian police powers.”

The report added that “the big question in 2017 will be how far the world lets atrocities go before doing something about them.”

Exceptionally, London-based Amnesty chose to launch its report in Paris.

Salil Shetty, the group’s secretary-general, said France has used emergency powers introduced in 2015 in the wake of terror attacks in an abusive and “deeply discriminatory” manner, confining more than 600 people, mostly Muslins, under house arrest and banning more than 140 protests.

“Even states that once claimed to champion rights abroad are now too busy rolling back human rights at home to hold others to account,” Amnesty said. “The more countries backtrack on fundamental human rights commitments, the more we risk a domino effect of leaders emboldened to knock back established human rights protections.”

France’s government has repeatedly defended the emergency powers as a necessary safeguard against the severe terror threat it says is facing the country, and parliament has repeatedly voted to extend those powers. –John Leicester