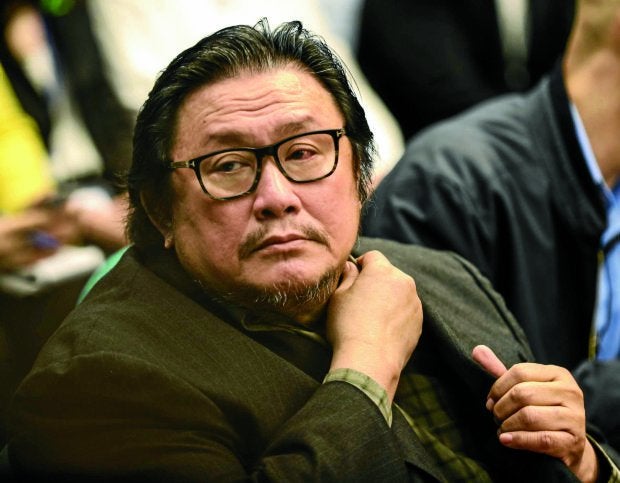 Wenceslao “Wally” Sombero at the Senate hearing on the Jack Lam bribery scandal on Feb. 16, 2017. (PHOTO BY LYN RILLON / INQUIRER)

MANILA — Even while he had missed three earlier hearings, a smug Wenceslao “Wally” Sombero, the man who delivered P50 million in cash to immigration agents to seek the release of illegal Chinese workers, on Thursday, complained about being cut off by senators.

Verbose in his responses, Sombero, a former police officer and self-declared “expert” on the gaming industry, interjected amid Sen. Risa Hontiveros’ questioning as she hurried through a series of questions while working under a time limit as the hearing entered its seventh hour.

“We are not given the chance to answer. Patong patong ang tanong, napuputol pagsagot (The questions overlap, and our answers are cut off),” said Sombero, a man who was almost arrested shunning the earlier hearings.

This infuriated Gordon, who had already warned him earlier about his evasive responses.

“You are insulting this committee. You try to put form over substance. You come up with half-truths, hairsplitting answers. You better say your sorry properly,” an angry Gordon told Sombero.

At that point, he was prompted to apologize.

Earlier in the hearing, his circuitious evasive responses drew the ire of several Senators.

Sen. Leila de Lima called him a “glib talker” and a “fixer.” Sen. Joel Villanueva made an indirect reference to him as a “scumbag” for asserting that there was nothing illegal about the arrested Chinese workers.

And committee chair Sen. Richard Gordon several times reprimanded him for being a “smart aleck” and being technical about his manner of responding to questions.  SFM