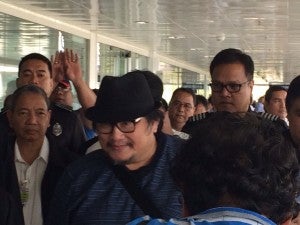 MANILA — Finally heeding the Senate’s subpoena, former police official Wenceslao “Wally” Sombero Jr. on Thursday made reluctant admissions that he had liaised the turnover of P50 million in cash to immigration officials for the release of more than 1,300 illegal Chinese workers caught at gambling magnate Jack Lam’s firm at the Clark Freeport Zone, Pampanga.

Sombero, a self-styled “investigative researcher” and expert on the international gambling industry, spoke on the defensive as he gave circuitous testimony on how he came to give cash to the now former Deputy Immigration Commissioners Al Argosino and Michael Robles on the early hours of Nov. 27 at an upscale hotel casino in Parañaque City.

“Mr. Chair, I’d like [to put it into the] records that what happened at the COD (City of Dreams) from Nov. 26 to 6.30 a.m., Nov. 27, no extortion or bribery happened for the record,” said Sombero, drawing silence from the hall.

After a pause, he then said: “What happened was a payoff.”

“It was a business decision of the Jack Lam group to agree on that amount,” he said, adding that an initial amount of P100 million was agreed upon to bail out the arrested Chinese nationals.

When asked later if he gave the first payment of P50 million, Sombero told Gordon: “I did not give P50 million. I do not have that kind of money.”

Upon clarification, he said: “I was the one who handed it over.”

At that point, an exasperated Senate blue ribbon committee chair Richard Gordon reprimanded Sombero, saying: “Try not to be a pilosopo.”

“Don’t be a smart aleck, don’t give us the runaround,” said Gordon, adding that the Senate had been “very liberal” with him, giving him the free pass after missing three hearings while he was in Canada.

Again when asked to characterize what happened at the hotel where money changed hands, Sombero again reiterated: “No bribery or extortion happened.”

Gordon then retorted: “You’re being technical. Just tell the truth!”

Sombero also tried to detach himself from the two individuals who had withdrawn P50 million cash from a casino cage, an amount borrowed by Lam from his associates.

Initially, he said Alex Yu, Lam’s interpreter, had instructed him to get two people to withdraw the cash if he did not want to do anything with the transaction.

“I was just instructed. There were two people who went to the cage. I don’t want to be involved in the withdrawal,” said Sombero.

Yu, in his testimony, however, said that Sombero got the two people. Later, under questioning, Sombero finally admitted he knew the two men — Wilson de Jesus and Martin Corpuz — who made the withdrawals.

“That’s what I’m saying. Nakakapundi sinasabi mo (you are making me lose patience). I’m still taking you at good faith. Answer and get to the point,” Gordon said.

“Would you like me to treat you as a hostile witness? I just don’t want to be taken for a ride,” he said. “Do not wrestle with us.”

Yu further said that he was in constant contact with Sombero in making arrangements for the cash handover even as the former police officer asserted that he had no direct hand in collecting the money.

“So it was still you!,” Gordon said, when it was made clear that it was still Sombero who picked the two men to make the withdrawals.

“You are bordering on contempt! You are protecting yourself from bribery, extortion. You produced the two people!,” he said.

The senators’ questioning also got Sombero to admit that he remained in possession of a separate P10 million that he asked from Lam’s group in partial fulfillment of Argosino’s request for another payment of P50 million.

He maintained that he did not ask for the money; Yu gave him the money instead. But the second handover no longer happened.

He said he later told Yu that the money should no longer be given as none of the Chinese workers have been released at that point.

Sombero has not returned the cash, saying he and Lam’s men have to do some “accounting” to pay for legal fees. SFM