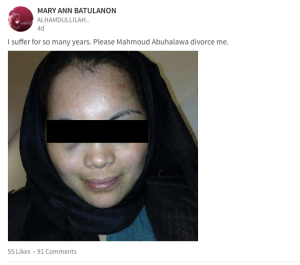 In her LinkedIn and Instagram profile accounts, 30-year-old Mary Ann Batulanon pleaded to her Jordanian husband to spare her from his tough fists. “I suffer for so many years. Please, Mahmoud Abuhalawa, divorce me,” she wrote, and posted a selfie showing her bruised face.

Married to Abuhalawa in 2012, the OFW, a receptionist in a car showroom, had only harsh words for his husband, who works in a bank.

“This has been going on for many years. He beats me up black and blue without any mercy. I cannot take it anymore,”  Batulanon told Khaleej Times. Before she tied the knot with Abuhalawa, she converted to Islam.

To strengthen her claims of her husband’s beating, she showed the news site a hospital record dated June 29, 2016, during which she was admitted for treatment of bruises.

“All I want from him now is a divorce. He should also pay for my daughter’s maintenance. I took to social media so that the world knows what he is doing to me,” she explained, adding that she already moved out of their house.

However, Abuhalawa denied his wife’s accusations, at the same time expressing his willingness to grant her a divorce. “It is not true. She hurts herself every time and goes to the court to file [a] case against me,” said Abuhalawa. “But if she slanders my name in social media, I will take legal action against her.”

In 2016, Batulanon filed for divorce and sole custody of their 4-year-old daughter, but the case was dropped.

The couple’s case was referred to a court after Abuhalawa failed to show up before the family guidance committee.  Gianna Francesca Catolico / RA