Cambodia, Malaysia legislators one with PH solons vs death penalty 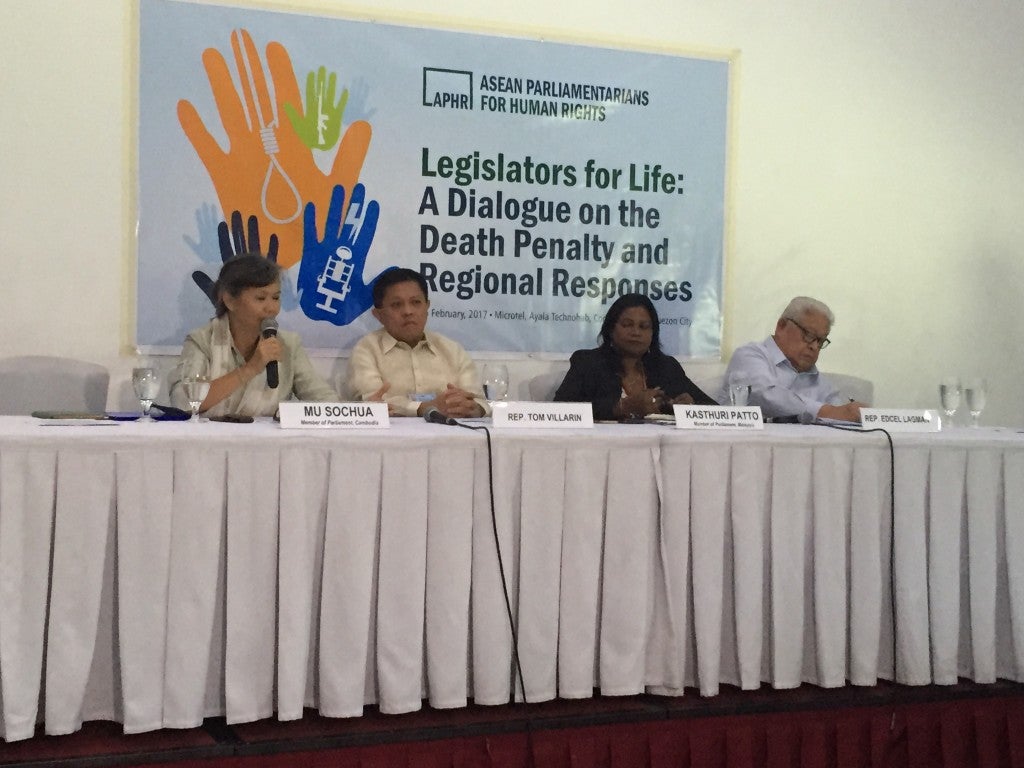 Members of parliament from Cambodia and Malaysia expressed solidarity with congressmen from the Philippines during the “Legislators for Life” forum in the fight against the reimposition of death penalty. MARC JAYSON CAYABYAB/INQUIRER.net

Members of the parliament from Cambodia and Malaysia expressed alarm at the moves in the Philippines to restore the death penalty, calling their Asean neighbor their model in the fight to respect life.

Kasthuri Patto from Malaysia and Mu Sochua from Cambodia on Wednesday attended the “Legislators for Life” forum to express solidarity with Philippine opposition lawmakers in the fight against the reimposition of capital punishment.

In a press conference after the dialogue, the members of the parliament shared the experience of their countries, one of which has a violent history of state-sponsored killings and genocide.

Sochua, whose parents were killed during the genocide perpetrated by the Khmer Rouge, urged the Philippines to learn from the Cambodian experience and instead look for restorative ways to solve criminality.

“I am here with the endorsement of the members of the parliament from Cambodia who like me [had] gone through years of atrocities, genocide, that killed our people, Cambodians killing Cambodians, what is called a state-sponsored killing, and genocide is part of it,” Sochua said.

Sochua said Cambodia has always looked up to the Philippines as “heroes or fighters for human rights,” and was inspired by the country’s experience during the 1986 people power movement that ousted the dictator Ferdinand Marcos.

“We want to continue to put you on that very high position,” Sochua said.

Sochua said death penalty may have been abolished in Cambodia, but corruption is prevalent in its democratic institutions like the military, police and the courts.

Patto meanwhile said that in the Malaysian parliament, Philippines and Cambodia are always mentioned as examples of countries in the Asean region that abolished the death penalty.

“These are the two nations which we should be looking up to move forward to abolish death penalty,” Patto said.

She expressed hopes that the Philippines would not renege on its abolition of the death penalty, and would continue to be in that “moral high position” in the fight against capital punishment.

Patto said in Malaysia, death penalty is being imposed on the commoners who are convicted for crimes such as drug trafficking and use, while there are no members of the royalty or relatives of ministers who are charged with these offenses.

“I think this shakes the social fabric in our country. It’s rare that you see the son or daughter of a minister, or son or daughter of royalty, being charged with trafficking drugs… But you’ll see a contractor, common laborer, bus driver, being convicted for crimes like these,” Patto said.

Patto said the reimposition of the death penalty in the Philippines would have an adverse effect on the moves in Malaysia to abolish capital punishment.

“If, God forbid, the Philippines decides to (restore) death penalty, it would have an adverse effect on Malaysia which has a one foot here, one foot there… If we want to abolish death penalty, how are we going about it if we’re looking at examples like Cambodia and Philippines?” Patto said.

Lawmakers in the Philippine Congress expressed hope that the country would learn from the experience of its Asean neighbors.

Albay Rep. Edcel Lagman said the Philippines will lose face in the Asean region if it takes back its abolition of the death penalty.

“The Philippines will lose its preeminent leadership in the region if we backtrack and reimpose the death penalty,” Lagman said.

Lagman said “punitive justice is not justice,” adding that he never asked for the death of those behind his enforced disappearance of his brother Hermon Lagman, a human rights lawyer and desaparecido during the martial law regime, as well as the assassination of his brother and known communist leader Filemon or “Popoy” at the UP campus in 2001.

“We don’t want death to the perpetrators of this heinous crime… It’s not true that the death penalty would give justie to the victims of heinous crimes,” Lagman said.

Akbayan Rep. Tom Villarin said if the Philippines rescind the United Nations International Covenant on Civil and Political Rights (ICCPR), it would be the first country to renege on its treaty obligations against the reimposition of death penalty.

The ICCPR under the Second Optional Protocol states that “Each State Party shall take all necessary measures to abolish the death penalty within its jurisdiction.”

“If, God forbid, the Philippines renege on that commitment… we’ll be the first country reneging on our international commitment on the right to life. That would be so abhorrent, it would lose face in the international community of nations,” Villarin said.

Senator Risa Hontiveros said the opposition was able to muster a simple majority or 13 of 24 members against the death penalty.

She said death penalty is not an effective deterrent to crime, adding that government should instead look at the roots of criminality and reform the criminal justice system.

“The real deterrent is not simple retribution, not simple vengeance. It is to get to the roots of criminality, especially the economic and social roots that breed crimes,” Hontiveros said.

The bill seeking to restore death penalty is under plenary debates in the House of Representatives, where lawmakers are more amenable to passing it because death as a punishment is no longer mandatory, giving leeway to the judge or justice to impose life imprisonment.

The reimposition however faces rough sailing in the Senate, where senators centered on the country’s treaty obligations against the death penalty.

The bill seeks to impose death penalty on more than 20 heinous offenses, such as rape with homicide, kidnapping for ransom, and arson with death.

According to the original version of the bill, the following are punishable by death under the Revised Penal Code – treason, qualified piracy, qualified bribery, parricide, murder, infanticide, rape, kidnapping and serious illegal detention, robbery with homicide, rape, intentional mutilation or arson, and destructive arson.

IN THE KNOW: Death penalty

Carnapping is also a criminal offense punishable with death under the Anti-Carnapping Act or Republic Act 6539.

Read Next
US nuclear-powered sub visits Subic on Valentine’s Day
EDITORS' PICK
DILG to stranded workers: ‘Stay where you are’ until Luzon-wide quarantine is over
BREAKING: 1,075 people in PH has coronavirus disease – DOH
Style and music journeys with Claudia Barretto
UP-PGH wards for COVID-19 patients finished in 5 days
IATF: Food firms to operate with 50% of workforce during Luzon quarantine
Cebu City closes its borders
MOST READ
Tootsy Angara bares neighbor wanted them out of village
Pacquiao to seek probe on leaked private letter from Barangay Dasmariñas
Another doctor dies due to COVID-19 in Cebu City, doctor-husband critical
Lagman: Ban overseas deployment of Filipino medics, nurses for now
Don't miss out on the latest news and information.