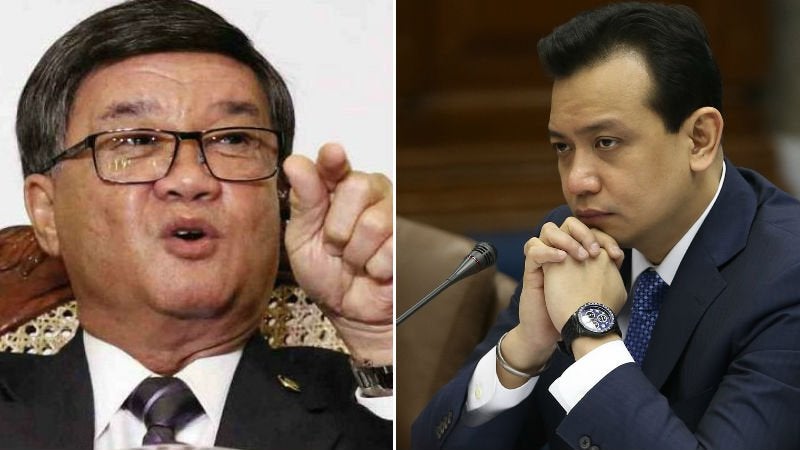 MANILA — Sen. Antonio Trillanes IV urged Justice Secretary Vitaliano Aguirre II, on Sunday, to resign and save President Duterte from embarrassment following the latter’s alleged involvement in certain controversies that included the bribery or extortion scandal at the Bureau of Immigration (BI).

The BI controversy is such a big case with deep implications that may even lead up to the President, according to Trillanes during a radio program.

When contacted by the Philippine Daily Inquirer later, the senator, who arrived late last week from a trip to the United States, did not want to expound on his statement that the BI scandal might reach the presidential level.

“It could lead up to the President because this is such a deep case … I’m just saying that there is much information that have yet to be uncovered in this bribery scandal, ” he told the Philippine Daily Inquirer, adding he would participate in the resumption of the Senate justice committee’s inquiry into the BI controversy on Thursday (Feb. 16).

And finally expected to appear at Thursday’s hearing will be the  elusive Wally Sombero, who allegedly gave P48 million to sacked BI associate commissioners Al Argosino and Michael Robles, according to Sen. Richard Gordon, chair of the justice committee.

Gordon said on Sunday that Sombero called him up last Friday to say he would attend the Thursday hearing, as the Senate was poised to issue a subpoena for him and ask the Department of Foreign Affairs on Monday (Feb. 13) to cancel the latter’s passport.

Sombero was alleged by the two BI officials to have given them the bribe in behalf of casino mogul Jack Lam in exchange for the release of 1,300 Chinese nationals illegally working for Lam at his hotel casino in Pampanga.

But Sombero, who went to Singapore and Canada during the height of the BI scandal, claimed the two BI officials extorted money from Lam in exchange for the release of his Chinese employees who were arrested in November 2016.

In an interview with dzBB radio on Sunday, Trillanes agreed that Sombero, who had skipped the Senate inquiry three times since it started last month, has become “key” to finding out the truth about the controversy.

“Whatever version (Sombero) gives, there will always be someone who will be pinned down here so if I were him, now that he would come here, he should tell the truth because that will be the one to save him,” he said.

Trillanes disclosed he had been getting information of how deep the case has become because it involved a business worth billions of pesos and powerful personalities.

Trillanes said this was tantamount to “tampering with the testimony of witnesses.”

“He had committed so many incompetent things. This should not be only talked about.  He would spare the President this embarrassment if he resigns,” he said of Aguirre.

Trillanes doubted Mr. Duterte would fire the justice secretary, opining that the President seemed to be the type who would not fire his friends.

Trillanes also said that Aguirre’s continued stay at the Department of Justice ” will see the investigations against him to continue to go on and we cannot say if this could lead up to the President (as the investigations go) deeper.”

Asked to elaborate, he merely said “we cannot say where it will go.”

In the same dzBB program but separate interview, Gordon said Sombero’s appearance at the inquiry would help piece the story behind the BI scandal.

He said Sombero expressed fears for his safety in a letter he also wrote the committee. Gordon said  the Senate security would provide Sombero security from his arrival until his appearance in the Senate committee on Thursday.

Asked whether Sombero named who has been threatening his life, Gordon said the retired policeman did not say so.

Gordon also said that Sombero admitted he told Aguirre when he met with the justice secretary and with Lam in 2016 that Lam needed a “godfather” but it did not mean he wanted to offer a bribe.