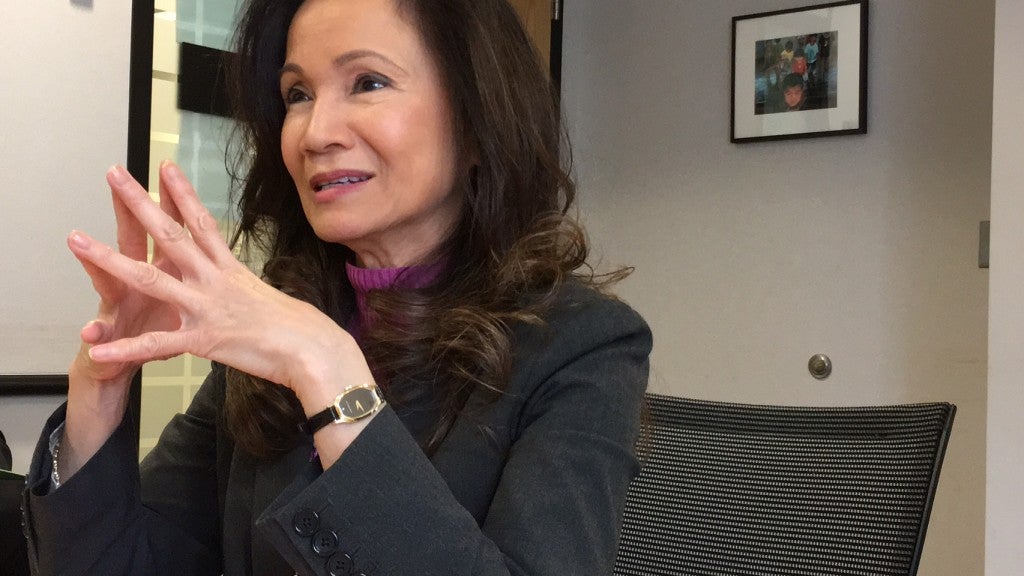 Gloria Steele, acting assistant administrator for the US Agency for International Development (USAID) Bureau for Asia, tells Filipino journalists that the Duterte administration has not asked USAID to leave the Philippines and in fact, development programs are continuing. Photo by Nikko Dizon/INQUIRER

WASHINGTON—Despite President Rodrigo Duterte’s public pronouncement that the Philippines could survive without US development assistance, his administration continues to work with the US Agency for International Development (USAID).

“We continue to have programs with them and no one has asked us to leave or to discontinue… We continue to work together,” said Gloria Steele, acting assistant administrator for USAID’s Bureau for Asia.

In fact, the USAID team in Manila had its first meeting with its Philippine counterparts last January under the two new administrations of Mr. Duterte and US President Donald Trump.

Health Secretary Paulyn Ubial was expected to meet with USAID officials here as well as her counterparts in the Trump administration, Filipino journalists learned at the meeting with Steele and her USAID colleagues in the agency’s headquarters in Washington, DC.

The journalists, including the Inquirer, were on a two-week US State Department-sponsored Foreign Press Centers (FPC) reporting tour that highlighted the different aspects of the US-Philippines bilateral relations.

The USAID is the agency that administers the US government’s socio-economic development assistance to other countries.

Steele said USAID projects were “not aid per se… We call it a partnership.”

Steele said the Duterte administration has requested USAID to continue with its programs in the Philippines that range from education to health to promoting resiliency in the face of man-made and natural disasters.

“I think on the implementation level, they have asked us to continue because there is unfinished business. There is work to be done and, like I said, our whole goal was to make this a sustainable program so that Filipinos could carry this on by themselves,” Steele said.

She added that the people and the communities themselves that USAID works with in various parts in the Philippines want the programs to continue.

The new administration was also building on the success of programs implemented during the previous Aquino administration, which focused on an anti-corruption campaign.

This time, however, the Duterte administration wants to emphasize the need for “equity,” Steele said.

“We have talked about continuing the partnership for growth but I believe they now call it, ‘Partnership for Growth with Equity’,” Steele said, noting that indeed, while the Philippines had the second fastest growing gross domestic product (GDP) in Southeast Asia, “the equitable distribution was not there.”

But a drug rehabilitation program has yet to be included among USAID’s projects in the Philippines.

Steele explained that while the Department of Health (DOH) said that “it might be an area they want to discuss with us,” USAID in the Philippines itself has yet to find resources for it as it would be an entirely new program.

“We continue to be in Mindanao addressing resilience issues and of course, growth,” Steele said.

Angered by the US criticism over his bloody campaign against illegal drugs, Mr. Duterte last year the USAID “can go to hell.”

In December, the President also said the Philippines can survive without any foreign assistance after the Millennium Challenge Corporation (MCC) announced it has deferred a vote on the reselection of the Philippines for compact development” amid concerns “about rule of law and civil liberties.”/RGA