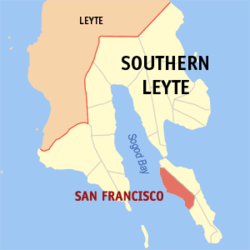 MAASIN, Southern Leyte  — The Coast Guard District Eastern Visayas (CGDEV) has been searching for an American tourist who went missing after he went diving in San Francisco town, Southern Leyte.

Max Quinn, 28, was last seen diving at Napantao dive site on Feb. 4 and had not been seen since.

Commander Lawrence Roque, Coast Guard Eastern Visayas spokesperson, said Jundino Razon, manager of the Peter’s Dive Resort where Quinn was billeted, reported that the American was last seen at the seawaters off south wall of Barangay Napantao, in San Francisco about 1:50 p.m.

Quinn was diving with another guest, Jeofrey Mayer, 27, a French national.

Roque said the two foreign nationals left the resort and started their dive about 10:30 a.m.

The two were supposed to go for a 7-meter recreational dive but Quinn wanted to go deeper and signaled Mayer’s to do the same.

Mayer refused, leaving Quinn to go deeper into the waters.

After learning that the victim failed to ascend , resort divers and the Coast Guard immediately searched for Quinn.

The resort divers went down to as far as 25 meters but failed to find Quinn.

Since the dive site has a depth of 90 meters, the resort owner requested for technical divers from the Coast Guard to conduct the search and rescue.

Roque said that a team of technical divers from the Coast Guard national office in Manila were heading to Southern Leyte to join in the search and rescue.

Roque said Quinn might still be alive since the American was a known professional diver and might have drifted to nearby islands.  SFM