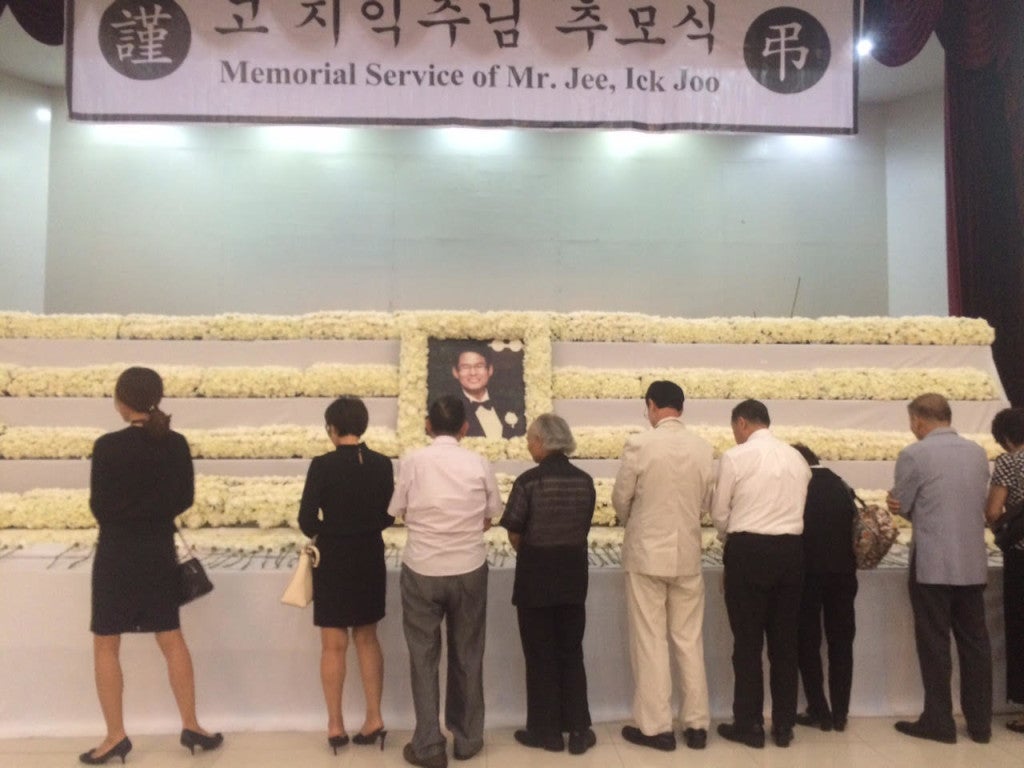 The family, friends and employees of murdered Korean businessman Jee Ick Joo as well as members of the Korean community in the Philippines attend a memorial service in his honor at the Philippine National Police Camp Crame headquarters on Feb. 6, 2017. (PHOTO BY JODEE AGONCILLO / INQUIRER)

MANILA — “(Mr Jee Ick-Joo’s death) has placed a permanent dark spot in the history of the police force …but I am here today to assure the bereaved family, we in the PNP are giving our best efforts in getting to the bottom of the case to get justice. I humbly reach out to the community, to show that PNP remains sincere in its mandate to serve and protect. The PNP will continue to intensify operations to secure local and international communities.”

Philippine National Police Director General Ronald Dela Rosa gave this assurance to the Korean community and the general public on Monday, during a memorial service for Korean national Jee Ick-Joo who was kidnapped, robbed, extorted from and murdered by Filipino policemen inside the PNP Camp Crame headquarters.

The service was hosted by the PNP and attended by the family and friends of Jee Ick Joo and members of the Korean community.

“In behalf of the PNP, I extend my deepest sympathy to the bereaved family of the late Jee Ick-Joo, especially his wife and the Korean community.  I know that there are not enough words to assuage the family’s grief brought by his loss… under the most unfortunate circumstance,” Dela Rosa said.

In front of the PNP Camp Crame multipurpose hall is a large frame  of Ick-Joo’s smiling photo adorned and surrounded by white flowers.

Ick-Joo, 53, was born in Seoul, Korea.  He pursued further studies in Australia, before working in Saudi Arabia, and eventually in an industrial plant in Subic, Zambales, a decade ago. He was the founder of Tech Philippines.

Richelle, Ick-Joo’s employee at the Tech Philippines for three years now, said his boss was a great leader who helped his employees work as a team, and served as a father who gave great advice.

“Maybe it’s crazy that until now, I’m still thinking a miracle will happen. That he will come back to our office and smile at us. We will always be proud to have a boss like you. We are proud to say we are employees of Ick Joo Jin. We miss you, tatang. You will always be forever in our hearts,” said Richelle in between sobs.

Said another employee: Ick-Joo was a strict but a sensible boss. He had high regard for the contribution of every employee. “He wanted us to go after our dreams. He loved our country so much that he never left even if he had the chance to.

“He always told us he would die with utmost dignity. And when I heard about what had happened to him, I thought that he fought hard dying with pride and dignity .. that he would not tolerate being overpowered by anomalies and vultures just like the people who took his life.”   Addressing the killers, the employee said, “You may have let his body vanish without a trace, but his purpose was heard by many people.” 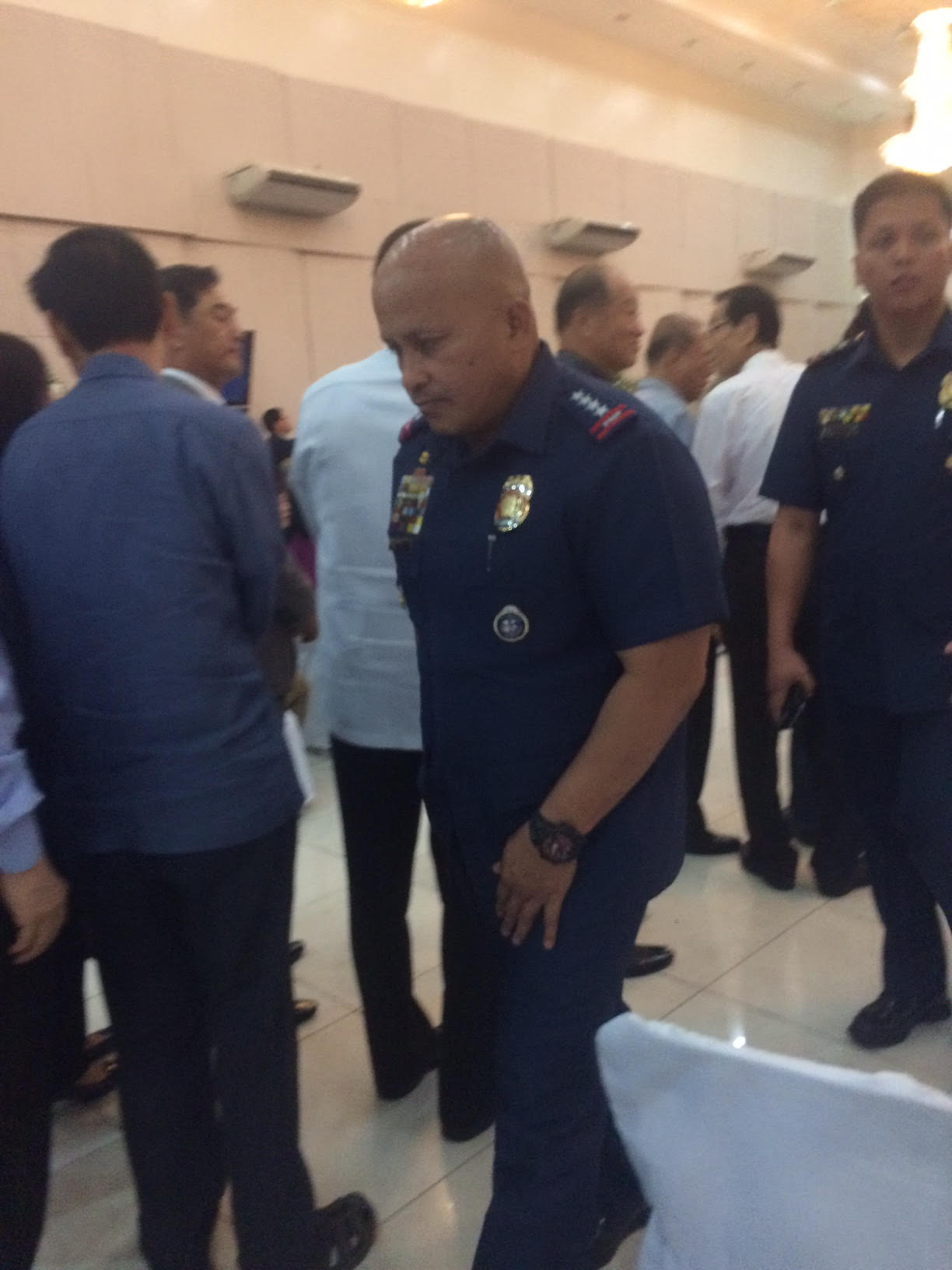 PNP Director General Ronald “Bato” Dela Rosa appears at the memorial service for murdered Korean businessman Jee Ick Joo at the PNP Camp Crame headquarters, on Feb. 6 2017. He vowed full justice for everyone involved in the kidnapping and murder case that was perpetrated by rogue cops and which shocked the nation. (PHOTO BY JODEE AGONCILLO / INQUIRER)

The employee reflected on the impact of Jee Ick Joo’s death on Philippine society: “He wanted the leader of this nation to open his eyes on what is happening in the country…Leaders who suck blood like vampire, and the victims are the innocent people, who are afraid to speak and are mum about their grievances.”

Ick-Joo’s family who was represented by one of the deceased’s closest friends, thanked everyone who came to the memorial service, including those who flew all the way from Korea.

“All lives are important. The life of one special life has gone away.  He died in a way that none of us wants to imagine….he died in the hands of police. Let his death not be in vain. Through his blood, never let this thing happen again. Let’s  not have these tears ever again. Let the Philippines be a country of justice and freedom. Let  Duterte be a figure everybody respects,” the Korean pastor who presided the service said.

He recalled the special bond of the Philippines and Korea, citing in particular the Filipino soldiers who fought, risked their lives or died in the Korean War.

“One life has been sacrificed. The situation has been resolved. Let those who are involved come to light and be punished for their deeds,” he added. 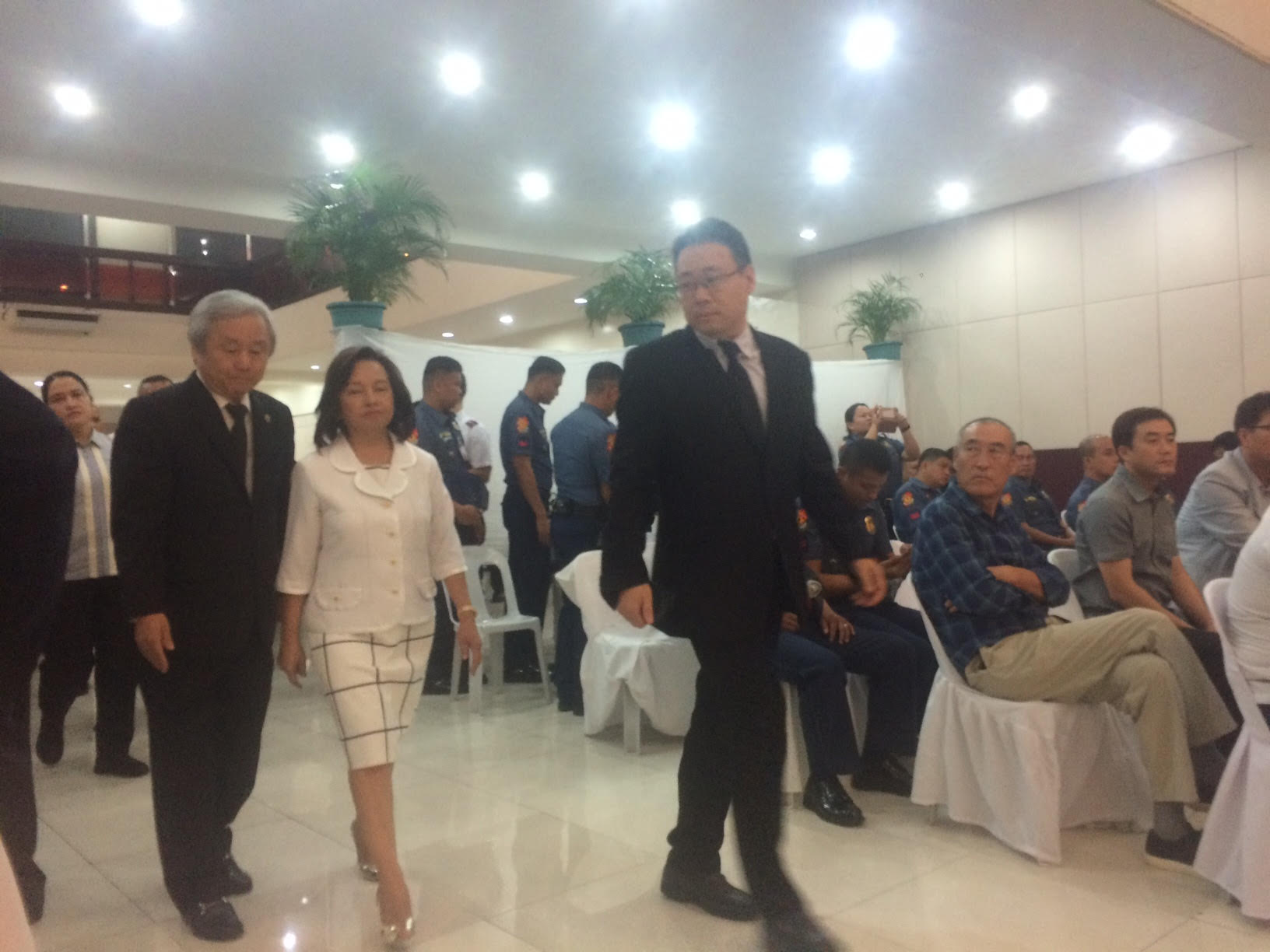 Former president and now Pampanga Rep. Gloria Macapagal-Arroyo and representatives of the Korean community in the Philippines, attend the memorial service for slain businessman Jee Ick Joo at the PNP Camp Crame headquarters on Feb. 6, 2017. (PHOTO BY JODEE AGONCILLO / INQUIRER)

The Korean ambassador wished for speedy and thorough justice in Ick Joo’s case and a much safer Philippines for everyone.  “Even though (Mr. Jee Ick-Joo) is no longer with us, we should take his passing as an opportunity for real change  toward a better and much safer Philippine society. A speedy and more thorough investigation must be conducted to shed light on the truth surrounding his unjust  death. All malicious criminals involved in the case must be brought to full justice, no matter what. Such a senseless crime must never happen again. We pledge our efforts through coordination with the Philippine (government) to make sure this incident will pave the way for Korean residents and Korean tourists inside the Philippines to live peacefully and secured without any apprehensions regarding safety.”

Those who were at the memorial service offered a silent prayer, and flowers for Ick-Joo.