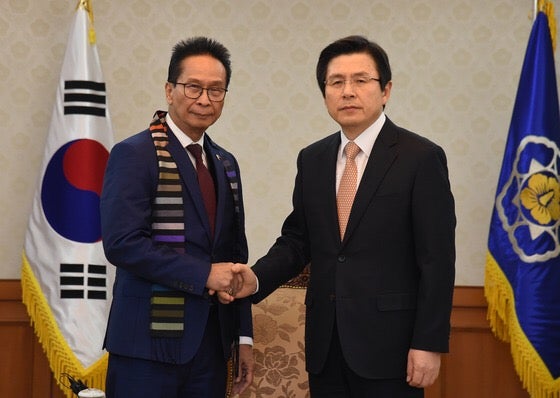 The Korean government had accepted the “profound and sincerest” apology of Philippine officials over the killing of Korean businessman Jee Ick-joo, chief presidential legal counsel Salvador Panelo said on Monday.

Panelo, who was tasked by President Rodrigo Duterte to fly to Seoul to apologize to the Korean people, said he relayed to Prime Minister and acting President Hwang Kyo-ahn the Philippine government’s “commitment and strongest assurance that it will prosecute to the fullest extent of the law the persons responsible for the murder and give justice to the victim.”

“I also told him that our countrymen share in their sorrow and grief over the brutal slaying of their countryman and expressed our regrets for its occurrence. I likewise expressed our government’s resolve to go after the criminals molesting, harassing, kidnapping and assaulting Koreans in our country as part of the government’s war against all forms of criminality and the illegal drug trade,” Panelo said in a statement.

“In response, Prime Minister Hwang accepted my offer of apology on behalf of the Philippine government, and noted that President Duterte apologized as well to the widow of Mr. Jee Ick-joo. Aside from declaring his optimism that the incident shall deter the commission of similar crimes against Korean nationals in the Philippines, Prime Minister Hwang Kyo-aahn also expressed his expectation that swift justice will be delivered to the family of Mr. Jee Ick-joo,” he added.

“In closing, Prime Minister Hwang thanked me for conveying the message of apology by the Philippine government, and said that he will share President Rodrigo Duterte’s words of comfort to the Korean people. Prime Minister Hwang also requested that I extend his gratitude and appreciation to President Duterte. We both concluded that the unfortunate death of Mr. Jee Ick-joo shall also serve as an opportunity to cultivate deeper relations between the Philippines and South Korea,” he added.

Jee was taken from his home in Angeles, Pampanga last October 18, 2016 by policemen allegedly led by Sta. Isabel of the PNP Anti-Illegal Drugs group in the guise of a drug operation. It was later revealed that the businessman was killed inside the police headquarters in Camp Crame the same day he was abducted. JE