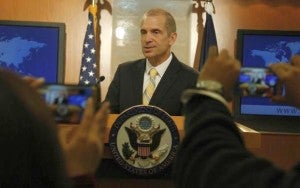 WASHINGTON, DC — The Communist Party of the Philippines (CPP) and its armed wing, the New People’s Army (NPA), remain on the list of foreign terrorist organizations (FTOs) of the United States government.

“The CPP-NPA is a designated FTO and it continues to meet the criteria for such a designation,” State Department spokesperson Mark Toner said on a brief statement on Thursday morning (late Thursday, Philippine time).

Toner made the statement before a group of Filipino reporters, including one from the Inquirer, who are on a State Department Foreign Press Centers reporting tour.

Before heading to Rome for the third round of formal talks last week, Philippine chief negotiator Silvestre Bello III said government would want CPP founder Jose Ma. Sison delisted from the US FTO to allow him to freely participate in the talks.

But the joint statement issued after the Rome talks was silent on the proposed delisting of Sison from the US FTO list.

On Wednesday, the communist rebels terminated their five-month old unilateral ceasefire, accusing President Rodrigo Duterte of reneging on his promise to release all political prisoners and government forces violating the truce.