Duterte warned: Be cautious in dealing with Trump 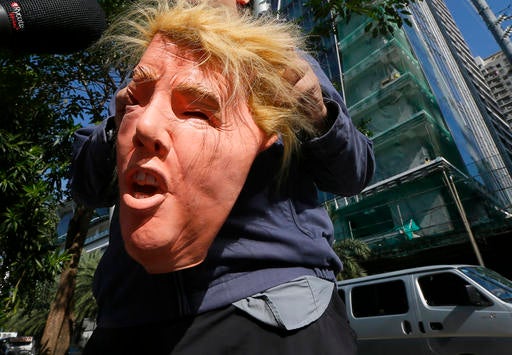 A protester holding a Donald Trump mask, talks to the media following a brief protest at the Trump Tower hours after Trump was sworn in as the 45th President of the United States, Saturday, Jan. 21, 2017, in the financial district of Makati city east Manila, Philippines. Pledging emphatically to empower America’s “forgotten men and women,” Donald Trump was sworn in as President of the United States on Friday, taking command of a riven nation facing an unpredictable era under his assertive but untested leadership. (AP Photo/Bullit Marquez)

The group urged Duterte to “stick to his independent foreign policy and not be dictated on,” following Trump’s inaugural speech, which it described as full of “populist and nationalist rhetoric.”

“Trump claims to want a shift in foreign policy, one more inward looking than before. He claims to echo the frustrations of the people who were left behind or who were forgotten by the establishment. But reality of course is another thing,” Bayan said in a statement.

The group alleged that Trump and his administration “represent big business interests.”

Some Cabinet and advisers of United States’ 45th President came from big banks and corporations, such as Goldman Sachs, Wells Fargo and Exxon. Trump’s son-in-law, Jared Kushner who is a real estate mogul, is also a key adviser.

Reports say his Cabinet’s combined worth could reach up to $14 billion.

The group said that the “hollowness” of this rhetoric may soon be exposed faster than former US President Barack Obama’s slogan of “change.”

“He (Duterte) can fortify his assertion of independence by abrogating the Visiting Forces Agreement (VFA) and Enhanced Defense Cooperation Agreement (EDCA),” Bayan said.

“He must not let his guard down against US intervention in the Philippines,” it added.

On the other hand, Malacañang earlier said that the Philippines is open to working with Trump’s foreign policy.

Presidential Spokesperson Ernesto Abella said there is an “indispensable need” to strengthen relations with allied nations, because prosperity and national well-being rely on these harmonious partnerships as our nation progress.

Abella also said that the Palace respects Trump’s “America First” pronouncement, as it is “in like manner [that the] national interest is the primary consideration that guides President Rodrigo Duterte,” and pointed out that the government’s priority remains to be the common good of the Filipino people and the national interest. IDL