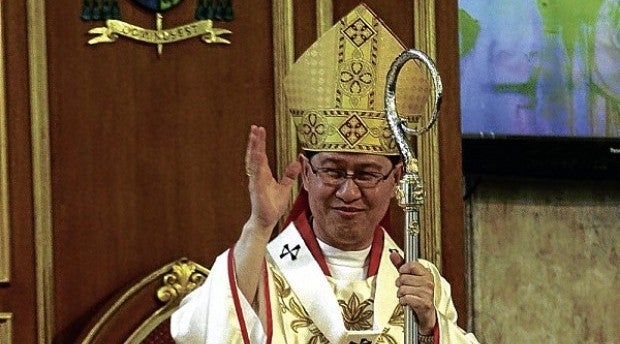 MANILA — Despite the misery and despair in life, God will bestow his mercy especially on victims of violence, slavery, and human trafficking in today’s society.

This was the assurance of Manila Archbishop Luis Antonio Cardinal Tagle as he called on the faithful to spread Jesus’ acts of mercy especially to society’s least, lost and the last.

In his homily during Monday’s Mass for the opening of the World Apostolic Congress on Mercy, the prelate stressed that one in suffering would not be alone in his time of need.

“The mercy of Jesus is on families, on mothers and parents losing their children to violence, to vices, to human trafficking, to new forms of slavery, children who are being kidnapped, sold to prostitution, their body parts harvested in an international business of body parts,” he said.

This year’s WACOM has the theme “Communion in Mercy, Mission in Mercy” and will gather almost 6,000 delegates from 40 countries and 60 archdioceses and dioceses all over the world.

It is a gathering of Catholic faithful from January 16 to 20, 2017, which aims to accelerate the culture of mercy in the Catholic Church and all over the world.

The WACOM opened on Monday afternoon with a well-attended Mass presided by the Apostolic Nuncio, Archbishop Giuseppe Pinto.

The Manila Cathedral was jampacked with hundreds of Catholic faithful from different countries who came to the Philippines to hear and share stories of Jesus’ mercy.

Monday’s Mass, incidentally, was the second anniversary of the Eucharistic celebration presided by Pope Francis during his visit to the country in January 2015.

Tagle reminded the faithful to be like Jesus in showing mercy to others who need it most, not boasting of it as their own but Jesus’ work.

“We are the disciples of His mercy. Those who are alone, those who were victimized, those who have been abandoned and neglected, those whose cries and tears don’t touch the hearts of others, would know that they have a family borne at the hour of Jesus at the foot of His cross,” he said.

Catholics should continue to show the face of God through acts of mercy, Tagle pointed out.

His mother, Mary, should be also emulated “for being attentive to those in need.”

“Like Mary, let us be attentive to those in need, let us bring their pleas to Jesus… He will tell us to perform signs that will reveal not ourselves, but will reveal Jesus and how lives, families, societies are saved and made whole because God is merciful,” Tagle said.

The prelated added: “No one may boast, we boast only of our need for God’s mercy. Reflect on how God has been merciful to us, how God has revealed the faces of Jesus to us in the many signs of mercy. We know we are products of mercy ourselves.”  SFM