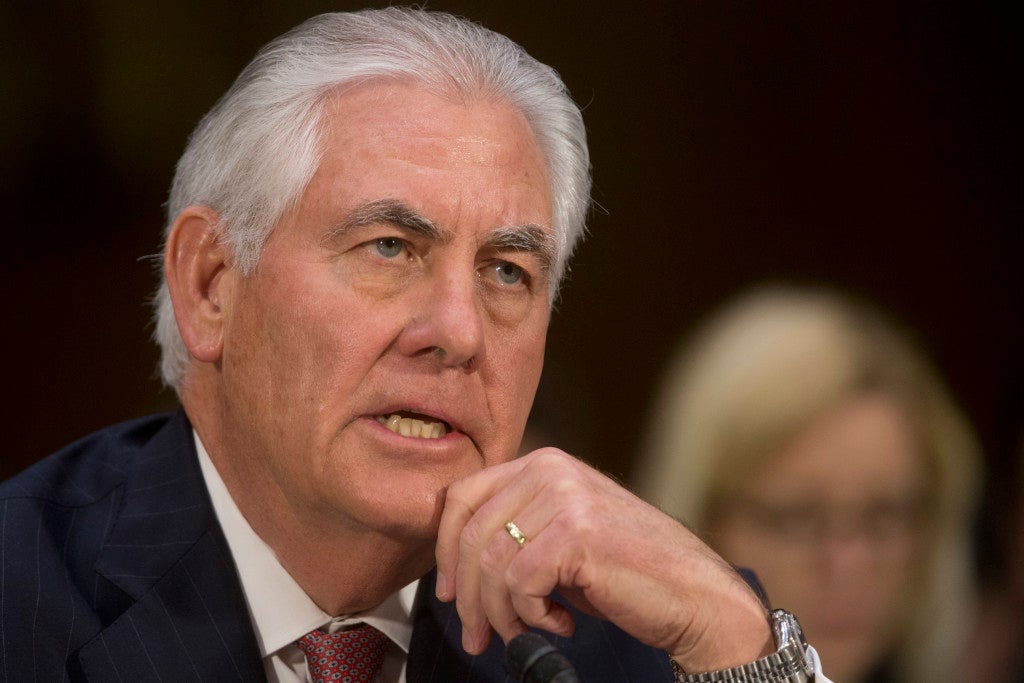 WASHINGTON—US President-elect Donald Trump’s nominee for US secretary of state, Rex Tillerson, set a course for a potentially serious confrontation with Beijing on Wednesday, saying China should be denied access to islands it has built in the contested South China Sea.

In comments expected to enrage Beijing, Tillerson told his confirmation hearing before the US Senate foreign relations committee that China’s building of islands and putting military assets on those islands was “akin to Russia’s taking Crimea” from Ukraine.

Asked whether he supported a more aggressive posture toward China, he said: “We’re going to have to send China a clear signal that, first, the island-building stops and, second, your access to those islands also is not going to be allowed.”

The former ExxonMobil Corp. chair and chief executive did not elaborate on what might be done to deny China access to the islands it has built up from South China Sea reefs, equipped with military-length airstrips and fortified with weapons.

Trump’s transition team did not immediately respond to a request for specifics on how China might be blocked from the artificial islands.

Chinese foreign ministry spokesperson Lu Kang on Thursday offered a measured response to Tillerson’s comments during a regular press briefing in Beijing, saying China has “the full right” to conduct activities in the South China Sea.

“The South China Sea situation has cooled down and we hope nonregional countries can respect the consensus that it is in the fundamental interests of the whole world,” Lu said.

Tillerson’s comments came amid rising tensions between the United States and China as Trump has suggested Washington could jettison its decades-old “one-China” policy.

The Chinese military has ramped up activities in a show of strength, with its lone aircraft carrier, the Liaoning, passing through the Taiwan Strait and an H-6 strategic bomber flying over the Spratlys earlier this week.

China claims nearly all of the South China Sea, building artificial islands on reefs in the Spratly archipelago and militarizing them to assert its claim, fueling tensions with its smaller neighbors that also have claims in the strategic waterway.

Brunei, Malaysia, the Philippines, Vietnam and Taiwan have overlapping claims in the South China Sea, through which $5 trillion in global trade passes every year.

In a case brought by the Philippines in 2013, the UN-backed Permanent Court of Arbitration in The Hague ruled on July 12 last year that China’s claims have no basis in international law and that it has violated Manila’s sovereign rights to fish and explore resources in the West Philippine Sea, waters in the South China Sea within the Southeast Asian nation’s 370-kilometer exclusive economic zone.

China has rejected the ruling, insisting its “undisputed sovereignty” over the South China Sea and offering bilateral negotiations to settle territorial disputes.

US commitment to Taiwan

Tillerson also said Washington needed to reaffirm its commitment to Taiwan, which Beijing regards as a renegade province, but stopped short of Trump’s questioning of Washington’s longstanding policy on the issue.

“I don’t know of any plans to alter the ‘one-China’ position,” he said.

Tillerson said he considered China’s South China Sea activity “extremely worrisome” and that it would be a threat to the “entire global economy” if Beijing were able to dictate access to the waterway, which is of strategic military importance and a major trade route.

He blamed the current situation on what he termed an inadequate US response.

“The failure of a response has allowed them just to keep pushing the envelope on this,” he said.

“The way we’ve got to deal with this is we’ve got to show back up in the region with our traditional allies in Southeast Asia,” he said.

These have angered Beijing, but seeking to blockade China’s man-made islands would be a major step further and a step that Washington has never raised as an option.

Under his strategic “pivot” to Asia, Obama has increased the US military presence in the region, and Trump has vowed a major naval buildup.

Obama has sought to forge a united front in Southeast Asia against China’s pursuit of its territorial claims, but some allies and partners who are rival claimants have been reluctant to challenge Beijing.

“They’re taking territory or control, or declaring control of territories that are not rightfully China’s,” he said.

Tillerson also said the United States could not continue to accept “empty promises” China had made about putting pressure on North Korea over that country’s nuclear and missile programs.

“China has proven a willingness to act with abandon in the pursuit of its own goals which at times have put it in conflict with American interests. We have to deal with what we see, not what we hope,” he said.

“[China] has not been a reliable partner in using its full influence to curb North Korea,” he added.

He said his approach in dealing with North Korea—which recently declared that it is close to carrying out its first test of an intercontinental ballistic missile—would be “a long-term plan” based on sanctions and their proper implementation.

Asked if Washington should consider imposing “secondary sanctions” on Chinese entities found to be violating existing sanctions on North Korea, Tillerson said: “If China is not going to comply with those UN sanctions, then it’s appropriate … for the United States to consider actions to compel them to comply.”—REPORTS FROM THE WIRES