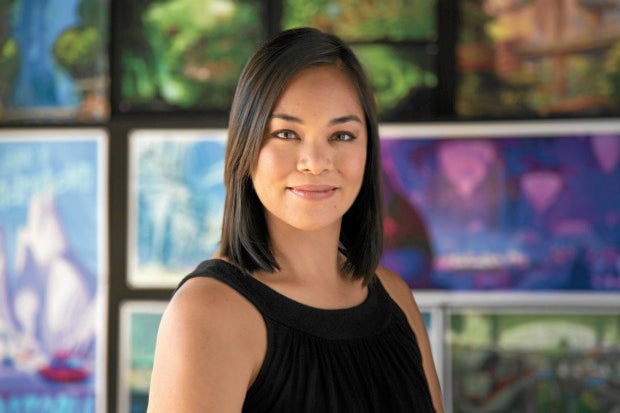 In a backstage interview with the media after accepting the award, codirector Rich Moore paid tribute to the animated film’s cohead, Josie Trinidad, saying she brought “her own point of view to that story.”

“She’s from the Philippines. She’s a woman of color,” said Moore, who described Trinidad as “incredibly talented.”

Trinidad “has a wonderful story sense” and is “so great as a leader,” Moore told the Inquirer in an earlier red-carpet interview.

Trinidad began as an apprentice in 2004 and rose from the ranks. Her mother, Carmencita Lazo Trinidad, is from Canlubang, Laguna province. Her late father, Amado Fernando Trinidad, was born and raised in San Juan City in Metro Manila.

The PG-rated film follows a bunny named Officer Judy Hopps (Ginnifer Goodwin) as she struggles to prove herself in the Zootopia police force. She enlisted the help of a con artist fox named Nick Wilde (Jason Bateman) in uncovering a conspiracy.

Zootopia bested Disney’s “Moana,” “Kubo and the Two Strings,” Illumination’s “Sing,” and French-Swiss feature “My Life as a Zucchini.”

“We wanted Zootopia to be a film for kids, but also for adults, that talked about diversity,” said codirector Byron Howard.

Last year’s best animated feature, Pixar’s “Inside Out,” was codirected by another Filipino-American—Ronnie del Carmen. Trinidad said she was a “huge fan” of Del Carmen.

“Hollywood is fast discovering that diversity and inclusion is not just a moral imperative and an important thing to do, but that diversity is also good business,” Friedman told the Inquirer.

“Because of the new technologies, the market has been segmented. Each community wants content that speaks to them,” he added.

Friedman was behind Sony Pictures’ successful publicity campaigns, including those for “Close Encounters of the Third Kind,” the “Spider-man” and “Men In Black” franchises, as well as such iconic television hits as “Seinfeld” and  “Breaking Bad” TV-on-DVD series.

One of the show’s episodes featured the “aswang,” a creature from Filipino folklore—an idea Lee shared with the show’s writers.

Lee said he would like to bring Filipino storylines to the forefront.

Prior to Grimm, Lee was best known for his role as Secret Service Agent Bill Kim on the popular FOX show “Prison Break.” He also starred as Lance Nguyen in the blockbuster “The Fast and the Furious.”

“We continue to spotlight Filipino achievers around the world. That’s our goal,” said Ruben Nepales, the first Filipino chair of the HFPA board.