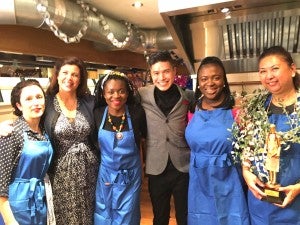 LONDON – Philippine cuisine continues to blaze a trail onto the UK’s mainstream food scene – even during the Christmas period.

The Filipina cook, a senior events executive and self-confessed foodie, was invited along with four other cooks to a real-time cook-off during the show, which sees Allsopp traversing the country in search of old and new culinary and craft traditions. 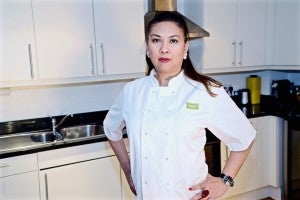 Along with fellow cooks Natali Griffith, Dare Oni and Carine Otton, Bandong was given two and a half hours to make a dish that could offer an alternative to traditional British festive fare, inspiring viewers in search of something new.

Following her win on the Channel 4 program, Bandong, a La Salle Zobel and UP Los Banos graduate who moved to the UK in 2002, expressed “immense gratitude” for the culinary honor.

“What an experience,” said the Filipina cook. “I was shocked that I won, because the dishes created the other ladies looked so amazing. Cooking on British television for a national audience can be nerve-wracking, but everyone involved in the production did their best to make us feel relaxed.”

“But I tell you, the nerves will kick in no matter what. Cooking in a kitchen that isn’t yours can make you feel lost, initially. And to cook a dish within two and a half hours from prep to plate is like Formula 1 in the kitchen, especially when you’re roasting [as with] chicken relleno, since the meat needs time to rest, and time was ticking.”

Bandong further acknowledged her joy at being able to put Philippine food on the map in Britain.

“Thank goodness it all worked out in the end. I think the fact that my dish was chosen means that people, including the best chefs in the world, are beginning to appreciate the tastes and flavors of Philippine cuisine. The profile of Filipino food is definitely on the rise.”

The cook added: “Romulo Café London raised the bar by winning the ‘most loved restaurant in Kensington’ award from Time Out magazine last month. I’m so glad that in my own way I’ve had the opportunity to showcase Filipino food in another high profile arena and to add to what seems to be a Filipino food phenomenon around the world.”[email protected]