Duterte to set aside UN tribunal ruling on maritime dispute 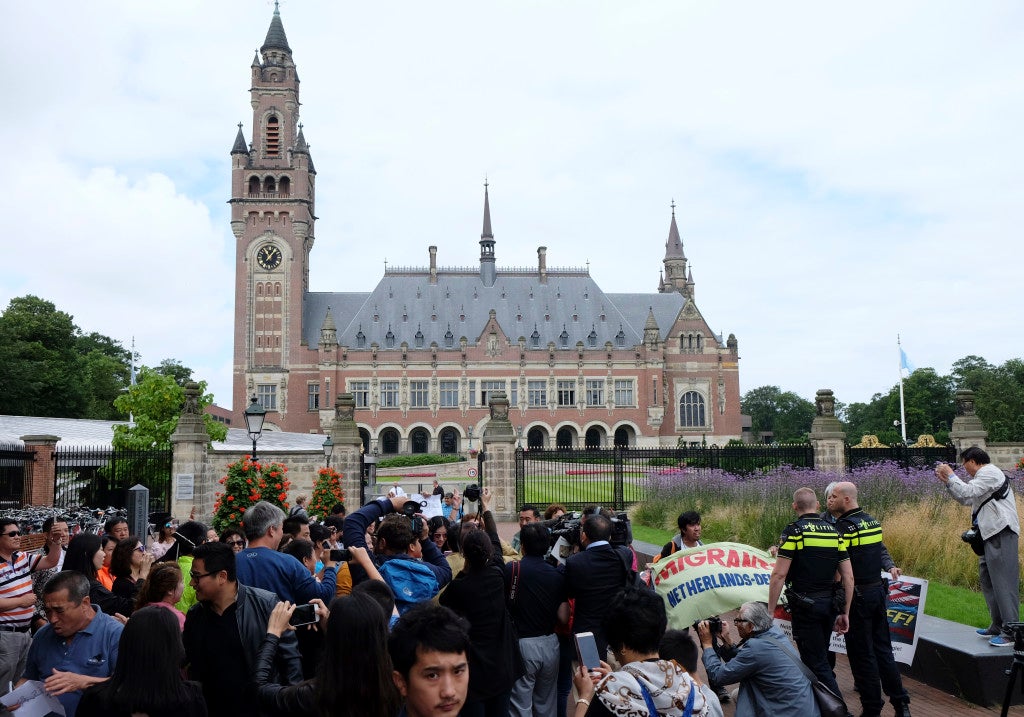 President Rodrigo Duterte said on Saturday the Philippines would not insist that China recognize an international arbitration court’s ruling invalidating its claims to nearly the whole of the South China Sea, despite a recent report suggesting that Beijing was ramping up its militarization in the disputed waters.

“In the play of politics now, I will set aside the arbitral ruling,” President Duterte said in Davao City. “I will not impose anything on China. Why? Because the politics here in Southeast Asia is changing.”

Mr. Duterte made the remarks when asked if a US think tank report that China installed antiaircraft and antimissile weapons on its new artificial islands in the disputed waters would affect his perception of Beijing.

The Philippines claims the reefs that were turned by China into man-made islands.

FEATURED STORIES
GLOBALNATION
Niece extols Filipino nurse who died alone while in quarantine in UK
GLOBALNATION
COVID-19 goodwill: Russia thanks PH for saving tanker captain’s life
GLOBALNATION
Filipinos get option to stay in Cambodia, which has zero COVID-19 death, or return to PH

Mr. Duterte, who took office in June, has taken steps to mend relations with China that grew hostile during the time of his predecessor, Benigno Aquino III, over the long-unresolved territorial disputes.

The Aquino administration took the disputes to international arbitration in a move backed by Washington after China seized a disputed shoal in 2012.

Kindest soul of all

Mr. Duterte threatened to abrogate a treaty that allowed US troop visitations here after Washington raised concerns over his deadly war on drugs but expressed gratitude to China for offering aid to the Philippines.

“China has the kindest soul of all,” Mr. Duterte said, adding that China had pledged billions in aid, including the construction of another drug rehabilitation facility next year.

Recently, Chinese businessman Huang Rulun funded the construction of a “mega” drug rehabilitation facility inside the military’s Fort Magsaysay, which could house up to 10,000 patients.

The Philippines “will never be ready to fight with China,” Mr. Duterte said, as he accused the United States of instigating hostilities between Manila and Beijing.

“It is you who is egging [on] a fight there,” the President said.

Foreign Affairs Secretary Perfecto Yasay said on Friday that the Philippines had no power to stop Beijing’s expansion in the disputed waters.

The Philippines, he said, would just continue to pursue peaceful means to try to prevent China’s activities.

The Philippines, under the Aquino administration, had taken China to the Permanent Court of Arbitration after it seized Scarborough Shoal.  The United Nations-backed international tribunal eventually ruled in Manila’s favor in July, though Beijing rejected the decision.

Mr. Duterte spoke of wanting to set aside the ruling for the meantime, as he pursued friendship with China.

After his state visit to China in October, Filipino fishermen were granted access to the area around Scarborough Shoal without being harassed by the Chinese Coast Guard.

Chinese Coast Guard ships had blocked access to the area since 2012, and the change of tack came after President Duterte met his Chinese counterpart Xi Jinping in Beijing.

The Philippines and China have no formal agreement regarding the area, which both claim as part of their traditional fishing grounds.

The Philippine Coast Guard meanwhile said it was looking to set up a “Joint Coast Guard Committee” with its Chinese counterpart as both sides met for their first organizational conference last week.

The joint committee would be inaugurated when both sides meet again in February next year, Filipino Coast Guard spokesperson Commander Armand Balilo said.

It was the first ever meeting of the two sides, during which concerns such as fighting drug trafficking and other maritime crimes, marine environmental protection, maritime search and rescue and capacity building were discussed. —WITH REPORTS FROM JULIE M. AURELIO AND AP