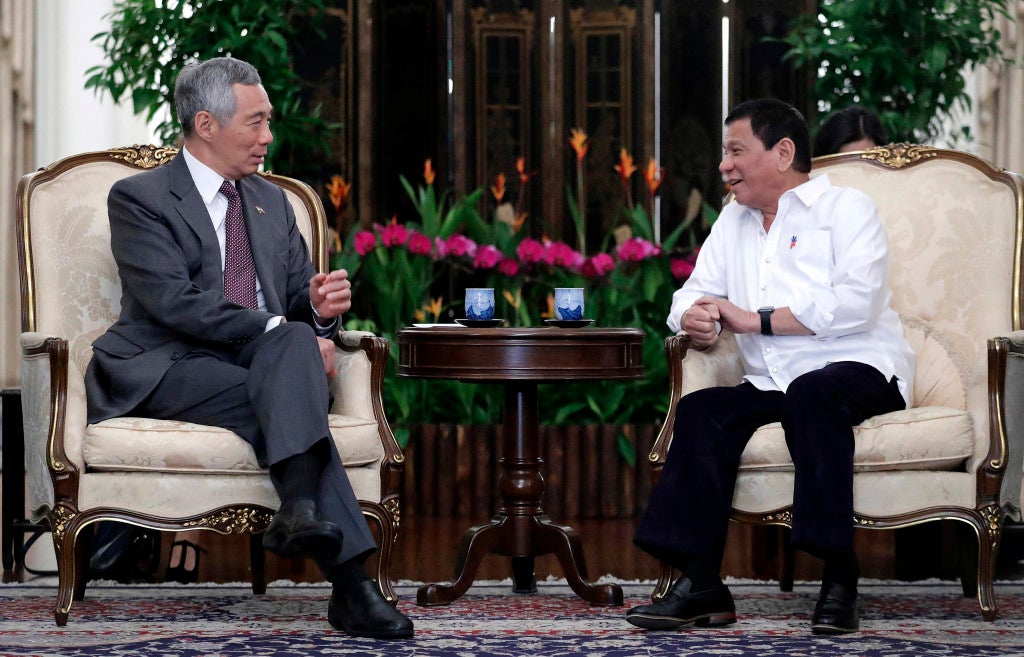 SINGAPORE—Singaporean officials welcomed President Duterte on Thursday, apparently setting aside a ban on the Philippine leader for burning a Singaporean flag when he was mayor of Davao City after the city-state hanged a Filipino maid in 1995.

Mr. Duterte arrived in Singapore early on Thursday for a two-day visit, and was warmly welcomed by Singaporean officials at Changi International Airport.

He flew in from Cambodia, where he had a two-day state visit.

Mr. Duterte also had discussions with Singaporean officials about ways to boost two-way trade and investment between the Philippines and the city-state, Manila’s fourth biggest trading partner in Asia.

Bilateral trade between the Philippines and Singapore is estimated at $8.8 billion.

While no major agreement is expected to be signed during Mr. Duterte’s visit, officials of the two countries are expected to discuss regional developments and the Philippines’ playing host to the Association of Southeast Asian Nations (Asean) summit next year.

They are also expected to tackle maintenance of peace and security, maritime security and cooperation, and push for a people-centered and people-oriented Asean regional model.

There was no mention of Mr. Duterte’s being blacklisted in Singapore for burning a Singaporean flag during demonstrations in the Philippines protesting the execution of Filipino maid Flor Contemplacion in the city-state in March 1995.

Contemplacion was hanged in Changi Prison for the murder of another Filipino migrant, Delia Maga, and the nanny’s charge, 3-year-old Nicholas Huang, on May 4, 1991. She reportedly confessed to the killings and never retracted her confession.

The execution strained relations between the Philippines and Singapore, with President Fidel Ramos nearly severing diplomatic ties with the city-state.

Philippine Ambassador to Singapore Antonio Morales told reporters on Thursday that he had no knowledge of Mr. Duterte’s being blacklisted in Singapore over Contemplacion’s execution.

“In fact, the President is visiting Singapore upon the invitation of Prime Minister Lee Hsien Loong, which was extended [on] the sidelines [of the Asean summit] in Laos [in September]. It would have happened earlier except for previous problems with scheduling,” Morales said.

On Friday, Mr. Duterte is scheduled to meet with members of the Singapore Business Federation before proceeding to an orchid-naming event at the Singapore Botanic Gardens.

Traditionally, Singapore cultivates a unique orchid variety in honor of a visiting head of state, after whom the flower is named.

The practice of naming orchids after VIPs started in 1957, when an orchid variety was named after the wife of the then London high commissioner to Singapore.

There are now over 180 orchid varieties at the Singapore Botanic Gardens named after visiting heads of state.

After the event, Mr. Duterte will meet members of the Filipino community in Singapore at the Max Pavilion and Halls at the Singapore Expo.