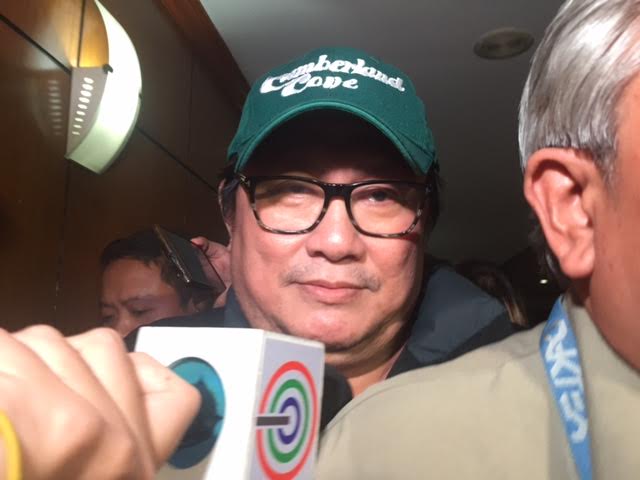 Former police senior superintendent Wally Sombero appears at the NBI on Dec. 8, 2016, to clear his name on allegations that he tried to bribe Justice Secretary Vitaliano Aguirre II on behalf of Jack Lam. Lam is being investigated by the government for hiring illegal Chinese workers for his online gaming business in Clark Freeport Zone, Pampanga. PHOTO BY AIE BALAGTAS SEE/ INQUIRER

When asked about Aguirre’s allegations, Sombero said those were just the justice secretary’s “perception.”

Sombero, who wore a green cap and a face mask to cover his face, surfaced a day after the Philippine National Police chief, Director General Ronald Dela Rosa, said Lam has sent surrender feelers. (Sombero would later be photographed by media without a face mask on.)

Lam has reportedly left the country.  He has no pending case but President Rodrigo Duterte ordered his arrest for economic sabotage.

In a brief interview on Thursday night, Sombero said he went to NBI to clear his name. He was questioned at the office of NBI director Dante Gierran until Thursday evening.

Last week, Aguirre insisted that Sombero was Lam’s representative. Sombero allegedly attempted to bribe him to become the protector of Lam’s casino operations.

Aguirre’s statement came as Lam tried to distance himself from Sombero to save his business interest in Fontana Leisure Parks that’s currently under fire for hiring illegal Chinese workers.  SFM