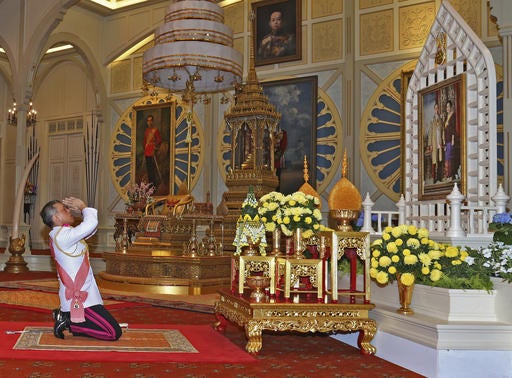 In this photo released by Bureau of the Royal Household, Thailand ‘s new king Maha Vajiralongkorn Bodindradebayavarangkun pays his respects to a portrait of the late Thai King Bhumibol Adulyadej and Thai Queen Sirikit at the Dusit Palace Thursday, Dec.1, 2016 in Bangkok, Thailand. Thailand has a new king, with the country’s crown prince formally taking the throne to succeed his much-revered late father, who reigned for 70 years.(Bureau of the Royal Household via AP)

Malacañang yesterday congratulated the new Thai King Maha Vajiralongkorn and wished him and his country well as he begins his reign.

“The Philippines wishes to convey our warmest congratulations to his Majesty, King Maha Vajiralongkorn, on his accession and proclamation as the King of Thailand,” said Assistant Communications Secretary Ana Marie Banaag.

The Palace said Thailand could look forward to a bright future under its new monarch.

“We are confident that his reign will continue to bring happiness, peace and prosperity to the Thai people. We wish for him success as he leads the Kingdom of Thailand,” she said.

Vajiralongkorn ascended to the throne on Dec. 1, more than a month after the passing of his father King Bhumibol Adulyadej.

King Bhumibol was much loved in Thailand where he had served as monarch for seven decades.

The new Thai King is the 10th monarch of the Chakri Dynasty and will also be known as Rama X.