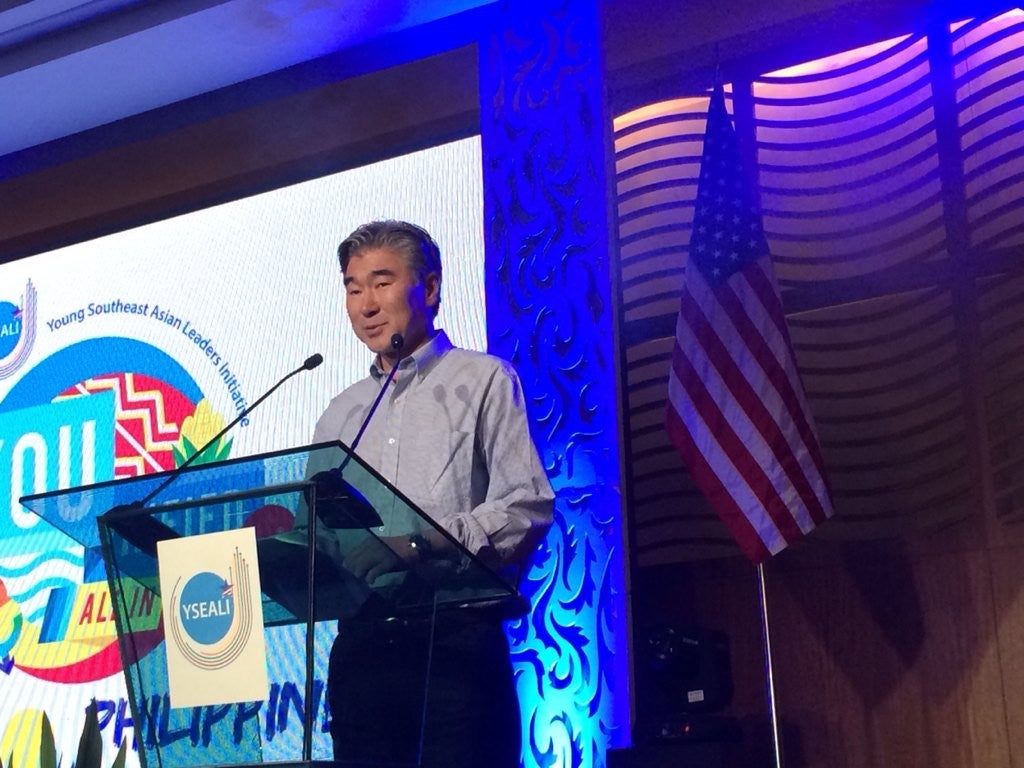 US ambassador-designate to the Philippines Sung Kim speaks during the third anniversary of the Young Southeast Asian Leaders Initiative. JEANNETTE I. ANDRADE/PHILIPPINE DAILY INQUIRER

Kim, who arrived less than 48 hours in the Philippines and described the timing of his arrival to be perfect, was a surprise guest at the event held at the Land Bank Plaza in Manila.

In his remarks, the ambassador-designate said that the YSEALI program “enjoys tremendous support in Washington” adding that US President Obama is its huge fan, participating in many of the group’s activities.

Kim pointed out that the program was first introduced through a video message of President Obama announcing its inception in the Philippines.

“I can’t think of a better place that would introduce a program like YSEALI because there’s tremendous energy, creativity, innovation and commitment to service here in the Philippines,” he said.

Membership in the YSEALI program has grown to 100,000 leaders, including 15,000 in the Philippines.

“You know really I wish I were younger because then I could join the YSEALI program too but I’m a little bit over the age limit,” Kim said in jest.

He added that he has great respect for YSEALI’s work and reminded the young leaders that “leadership also means public service and public welfare.”

“I think what you did today, engaging in various public service activities throughout the country is a tremendous model of what leadership really means. So I want to thank you for your great commitment and hard work and your leadership and I look forward to seeing many great things from all of you,” Kim concluded.

To mark YSEALI’s third year the group held a day of service, “YSEALI YOUnified,” conducting over 100 community service projects across Southeast Asia in keeping with its advocacies of civic engagement, economic development, education, and the environment.

In the Philippines 33 community projects were undertaken by YSEALI including agri-entrepreneurship workshops for farmers in North Cotabato, psychosocial therapy sessions for persons with disabilities in Ilocos Norte, and English literacy sessions for out-of-school youth in Sulu.

Launched in 2013, YSEALI is the US government’s signature program to strengthen leadership development and networking in Southeast Asia.