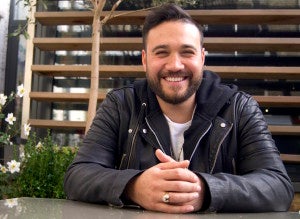 LONDON – In Notting Hill, at trendy Pan-Asian restaurant ULI along Ladbroke Road, I’m sharing gyoza with Max Herman, a talented British-Filipino composer, songwriter and record producer who has worked with and trained under some of the biggest names in the music industry to date.

For over a decade, Herman has managed to escape the spotlight and Brit-Fil radar, his name known mostly in credits and select industry circles, despite having collaborated on huge international campaigns and projects for Hollywood studios and brands like Adidas.

Now, Herman wants to use his musical expertise to raise the profile of talented Filipino artists on a global scale.

Born and raised in Cambridge, England, Herman cites his Filipina mother (a health care matron hailing originally from Leyte and Cebu), and his English father (a sociology professor of Lithuanian-German descent), as pivotal influencers in developing his musical passions, which have led him into a thriving music career. 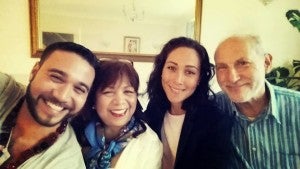 Taking after his father, a violinist, Herman learned to master the violin and piano. His mother — “a typical Filipina mum, always laughing and joking around” — loves singing and karaoke.

“They were both very encouraging of my music when growing up. Dad loved playing classical music, mum loved pop and soul, the Marvin Gaye era.” 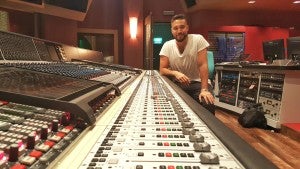 Herman credits his parents’ music tastes with helping his musical brain develop — being exposed to such a combination of genres from a young age instilled in him a “burning desire” to understand music.

“I remember going on the Internet, researching different types of music. I wanted to understand the emotion behind it,” recalls Herman. “I wanted to find out why something sounded sad, how melodies affected us. I never really got the process until I went to college and met an incredible pianist who taught me the concepts of major and minor.”

Breaking into the industry

Herman’s journey into the music world progressed naturally, through word-of-mouth recommendations and chance collaborations. He began playing various piano gigs around the country before landing tours with artists such as Lemar, a British singer-songwriter whose career soared in the early 2000s, and American jazz-soul musician and guitarist, George Benson.

While playing piano for a friend in Birmingham, Herman recalls landing the opportunity to tour with Lemar. “A friend of mine called Chris Brown was there at the gig — not the Chris Brown, but another one,” jokes Herman. “He was Kylie Minogue’s bass player at the time. He said to me, ‘You’re really good at piano, do you want to come and play for someone?’ When I went to meet him, it was at the Sony building. Next thing I knew, I was meeting Lemar. I ended up playing for him for a while. Touring, on stage, everything.” 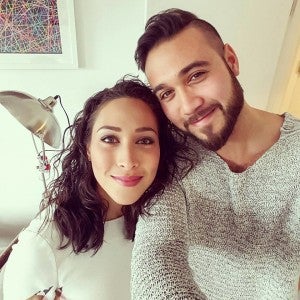 Max Herman with sister, Jessica, for whose wedding Max and Hamza Hawsawi wrote a track. CONTRIBUTED

Herman recalls being at the gym when a friend asked him to pitch a song for a project — a project that turned out to be writing a theme song for the world’s second oldest continental football championship after Copa América: the AFC Asian Cup. Together with singer-songwriter Radhika Vekaria, at Herman’s little studio in Southgate, North London, they spent 15 minutes writing the rough skeleton of a song before sending it to the organizers.

“Our idea was simple. We thought, let’s create a tune that people could whistle, that children would enjoy singing. Something that’s common. A very common term was ‘yalla’. That’s how ‘Yalla Asia’ happened. We sent it to the AFC, and they replied, ‘Sheikh loves it. He wants to produce it into a big song with a music video. Big artists.’”

At first, Herman thought the response was a joke. Then it dawned on him that not only he was creating Qatar’s first commercially released record with western elements, but also, working with international pop stars.

“I didn’t think it was a massive deal at the time. It only hit home when I received Jay Sean’s vocals. Then I realized, ‘This is actually happening. I’m doing business with Cash Money Records.’”

Over the past year, Herman has worked extensively with Hamza Hawsawi, winner of the The X Factor Middle East 2015, on his debut album.

“The collaboration wouldn’t have happened if I hadn’t composed music for the King of Saudi Arabia,” acknowledges Herman. “That really put me on the map as a go-to producer in the Middle East. Hamza and I were introduced by mutual friends in Dubai, and then we became great friends.”

“Actually, one of Hamza’s songs came about because my sister, Jessica, asked me to compose a piece for her wedding,” notes Herman. “I asked Hamza if he’d like to collaborate, and we ended up recording the song using a string quartet and choir at Metropolis Studios in London.”

Herman most recently signed Ayia Gold, a singer-songwriter that has been compared to Whitney Houston and Alicia Keys. They are currently working on her album and finding songs to suit her style.

Despite brushing shoulders with celebrities and getting swept up in the whirlwind of the music industry, however, Herman has never felt the urge to claim the spotlight. For him, it always comes down to the music.

“[All my progress] just been really organic,” admits the singer-songwriter. “I’ve never really sent a CD off. I think in life, if you just do what you love, people end up attracted to that energy. If you do things organically, most things happen. If you think in your head how you want your life to pan out, you’re the master of your reality at the end of the day.”

“I just like writing music,” he clarifies. “I’m not a fame-hungry person or anything. I believe that my purpose so far has been to bring enjoyment to people’s lives, and to bring them together through some of the music that I’ve written. I’m not trying to get on a record and [egotistically] go, ‘I’m Max’, you know?”

He adds: “My everyday life is probably the same as anyone else’s, apart from the fact I get to go into the studio, crank up my music, and hopefully not go deaf.”

Herman was, and still is, “obsessed” with music. He recalls sitting in a little garage at the back of his garden for weeks on end, making about five new records a day. “I have a library of songs, thousands of songs, just sitting there untouched. It’s mad. Sometimes I play tunes back and forget that I’ve even made them. I think, ‘Did I really put this together?’”

When creating music, Herman is adamant that the process should be organic, guided by emotion: “A lot of time you’ll be sitting in a studio somewhere. Collaborations should be natural, rather than forced, like when people say, ‘Let’s write a song.’ You should be emotionally in that state of mind first, I feel.”

“You can’t force music,” continues Herman. “It’s strange. I know you can write music for a deadline, but creative freedom is the biggest problem people have. Some artists are so fixated on having their music go a certain way, they don’t end up with a piece of music that goes beyond a throw-away tune.” 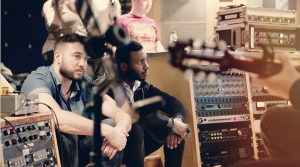 “Inspiration comes from within, right? With music, the moment you stop worrying about what other people think, when you just do what you love and it feels right to you — that’s when magic really happens. After a while, you think, ‘Whose song is it? Why am I asking what anyone else thinks?’”

“Ultimately, if I see my mum dancing to my record in the studio, I know I have something good,” he adds. “Mums are always honest.”

Raising the profile of Filipino talent

Herman identifies strongly with his Filipino roots and visits his mother’s family in Leyte on a regular basis. Despite growing up in a majority Caucasian town, he is quick to confirm that he never experienced racial negativity or bias.

“Nobody could tell where I was from. I got asked if I was Turkish, Arabic, Greek, Italian. I even got away with Caribbean a few times,” Herman recalls with amusement. “I guess I got the ‘flat nose’ thing quite a lot. That was as far as racism went for me — it was just banter, nothing deeper.

“Growing up half Filipino was actually something I really enjoyed. I felt accepted into different cultural experiences. I’d go into someone’s house and they were warm and open to me.”

He adds: “To me, the Philippines is the most beautiful place in the world. I do sometimes think, ‘Why the hell am I living in England?’”

Looking to the future

When asked about future projects, Herman mentions his desire to start collaborating with Filipino musicians and aspiring artists.

“I love Filipino singers. I think they’re some of the best vocalists in the world. I don’t know what it is, but for some reason, they can just sing. Everyone in the Filipino community can sing. Even if it’s bad, it’s still good. It’s the passion.”

As our conversation draws to a close, Herman expresses the necessity of creating greater music opportunities for Filipinos worldwide.

“They’re a very expressive people. More needs to be done. With my knowledge and experience, I feel like I could do a lot to help them. There’s no point keeping expertise to myself. There’s no point being precious about things.”

Herman adds: “Everything’s a collaboration, a combination. It’s all about finding the right people to collaborate with. I would love to help talented Filipino artists and get some collaborations happening.”