Philippine-US military exercises to be reduced next year 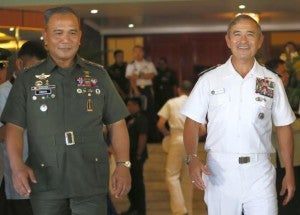 US Adm. Harry Harris, right, commander of the US Pacific Command, and Gen. Ricardo Visaya, chief of the Armed Forces of the Philippines (AFP), emerge following their two annual Mutual Defense Board meetings at Camp Aguinaldo in Quezon City, on Tuesday, Nov. 22, 2016. The annual meeting came at a time when Philippine President Rodrigo Duterte ordered the scaling down joint military exercises and other activities between the two countries. —BULLIT MARQUEZ/AP

Gen. Ricardo Visaya, chief of the Armed Forces of the Philippines (AFP), said Wednesday that five military exercises with the United States, including at least two major naval drills, will be scrapped next year at the direction of President Rodrigo Duterte.

Visaya told reporters that US officials respected the Philippines’ proposal to reduce the number of drills to 258, or five less than this year’s exercises.

On Tuesday, the two allies held a meeting of their Mutual Defense Board and Security Engagement Board co-chaired by Visaya and Adm. Harry B. Harris Jr., head of the US Pacific Command.

Visaya said the scrapped drills include an Amphibious Landing Exercise and Cooperation Afloat Readiness and Training, both major naval exercises that include territorial defense training.

He said next year’s exercises will focus on humanitarian assistance, disaster relief, and counterterrorism.

Duterte has said he wants to chart a foreign policy less oriented toward Washington, and wants to expand security ties with China and Russia.

Padilla said the large-scale Balikatan or “shoulder-to-shoulder” exercises will be retained but will focus on humanitarian and disaster response.

Read Next
PH-US agree to scrap 5 joint military trainings—AFP chief
EDITORS' PICK
A laptop that maximizes your WiFi so you can maximize your productivity
Why Tagle is a leading papal contender
In Borongan, nuns play hoops (not mahjong)
Powered by style, innovation and passion
House energy committee chair Arroyo bats for cheap electricity
KWF has no power to ban, censor written works – Lagman
MOST READ
Why Tagle is a leading papal contender
SRA officials should resign after ‘illegal sugar order’ – Zubiri
Arjo Atayde reveals proposal to Maine Mendoza was ‘more than a year’ in the making
Gilas gets solid core with Clarkson, Sotto planing in
Don't miss out on the latest news and information.