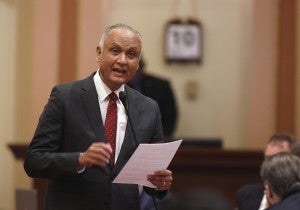 MENLO PARK, California — A key state health care figure vowed to defend the coverage gains California has seen under the Affordable Care Act in the face of widely expected efforts by President-elect Donald Trump to overturn much of the health reform law.

“I want to assure you, your staff and Californians that we stand ready to fight to keep what is working in this state,” Sen. Ed Hernandez (D-West Covina), chairman of the Senate Health Committee, told the board members of Covered California, the state’s health insurance exchange, in their first public meeting since Trump was elected on Nov. 8.

“What we have is too important to lose,” said Hernandez, an optometrist. He cited examples of people who had come into his optometry office for the first time because of their newly gained health coverage.

Any rollback in coverage, Hernandez said, would hurt millions of Americans.

California’s rate of uninsurance has been cut roughly in half since 2014, when federally subsidized health plans sold through the exchange first took effect and eligibility for Medicaid, the health care program for low-income individuals, was expanded. Both are key features of the Affordable Care Act, also known as Obamacare.

Health advocates who addressed the board Nov. 10, sent the same message as Hernandez, expressing support for the ongoing efforts of the exchange to sign Californians up for coverage in the fourth annual open enrollment period, which started Nov. 1 and ends Jan. 31.

Covered California officials said that Trump’s plan to “repeal and replace” the Affordable Care Act has created confusion among enrollees but that people are still signing up.

In the first two weeks of open enrollment, 44,885 new people have enrolled in health insurance through Covered California, according to numbers provided by the board. That’s down from about 50,000 in the same period last year.

But Peter V. Lee, the exchange’s executive director, noted that Covered California did not run ads at the beginning of this enrollment period because it didn’t want to compete with the election campaign. He said the new numbers are in line with Covered California’s projection of approximately 400,000 new exchange enrollees next year.

This week, the Centers for Medicare and Medicaid Services announced that more than 1 million people had selected plans on Healthcare.gov, the federal exchange website, during the first 12 days of open enrollment. Of those, 250,000 were new to the exchange. The number of people who selected plans was up 53,000 from the same period last year, according to CMS.

Covered California is the largest state-run marketplace. It has 1.4 million members, nearly 90 percent of whom receive federal tax subsidies to help pay their premiums.

Consumer advocates who spoke at the board meeting expressed optimism that California would maintain its status as a leader in health care reform, though many are also changing the conversation to focus on what parts of the Affordable Care Act might be kept.

It is unclear how far Trump will go in dismantling the health law. He conceded last week that he would like to keep some aspects of it — in particular, allowing young adults to stay on their parents’ health plans and banning insurance companies from refusing to cover people with preexisting medical conditions.

Health experts who addressed the Covered California board made it clear that everything is up in the air: The only thing they’d be willing to bet on is that the Republican replacement for the health reform law won’t be called Obamacare.

Ian Morrison, a health care consultant and futurist, told board members that the Republicans’ sweep of the White House and Congress will probably mean a less regulated insurance market, the end of mandates to buy insurance, smaller federal subsidies for the uninsured and greater state control over Medicaid — which also means less federal funding for the program.

Both Trump and House Speaker Paul Ryan (R-Wis.) have endorsed the idea of transforming Medicaid into a block grant program, in which states would get fixed allotments from the federal government and would be responsible for any health spending above those amounts.

“When you hear the term block grant, that is code for less money,” Morrison said. “No one talks about block grants and more money.”

The overarching question, Morrison said, is this: Will health coverage for 20 million people be significantly eroded?

He also said he found it hard to understand how guaranteed coverage for people with preexisting conditions could be kept if buying insurance was no longer a requirement for all. The authors of the health reform law believed that a lot of young, healthy people needed to be in the insurance pool in order to ensure that the sick ones didn’t drive up the cost of premiums.

John Bertko, Covered California’s chief actuary, said people should be looking to 2018, since any changes in 2017 are highly unlikely.

“I suspect with the big rate increases, 2017 is going to be a good year for plans that are in exchanges,” Bertko said. He said that was “a bit ironic” given the cloud now hanging over Obamacare.