Fil-Canadian marching band plays on at 36

TORONTO, Ontario–For its 36th anniversary, the Philippine Heritage Band trumpeted an invite to past and present members to grace the band’s “homecoming.”  And those who could–barring geographical distance or death–came in droves.

On the evening of Oct. 15, dozens of PHB alumni trooped to the Holiday Inn Select on Dixon Road in Toronto to enjoy the dinner-dance, a PHB mini-concert, and a nonstop nostalgia fest. 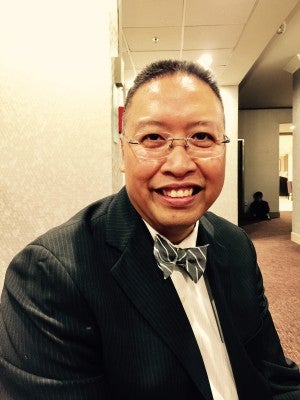 Founder and Executive Director Oscar Fariñas welcomed the guests, gave a history of the organization, and segued to introduce Major Sixto “Cap” Gimena, guest conductor for the mini-concert and a PHB alumnus (1994).
A retired major from the Armed Forces of the Philippines and a graduate of the University of the East’s School of Music and Arts, “Cap” is a well known commanding officer of the Philippine military bands. He became commanding officer of the General Headquarters Band in Quezon City, the Presidential Security Group Band in Malacanang, and the 5th Infantry Division Band in Tarlac.   His last tenure was as commanding officer of the Philippine Military Academy Band in Baguio City.  After his retirement, he emigrated to Canada in 1994 with his family and joined PHB soon after.

Another PHB alumnus, Allan Guinto, 49, an IT consultant, credits PHB with giving structure to his life.  “Music does that to you,” he said.  In 1982, as a 14-yea-old, he joined the band, starting out with the tenor sax, then moving on to the drums. 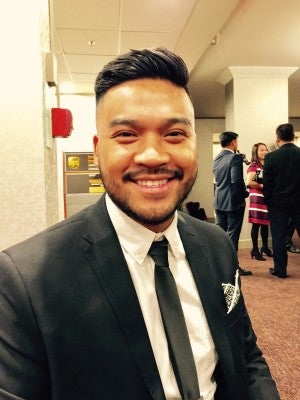 Kenneth Villaseñor claims PHB brought him out of his shell. INQUIRER/Marisa Roque

“Started the drumline, with my brother Caesar,” said Allan.  Caesar is now a restaurateur, the owner of Creemore Kitchen, close to Collingwood, Ontario.  The boys are children of Josie and Mac Guinto, who–even with their boys fully “graduated” from PHB–are still hardworking participants in PHB, with Mac serving as vice president and Josie as the chair of the food committee for special events.

Allan continued: “PHB developed my leadership skills; it helps build character.  When I became the band major, I learned a lot about organization, how to motivate members aged six to 76!  In 1987 the Ontario Trillium Foundation awarded me with the Leadership Award due to my involvement with PHB.” 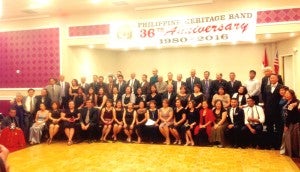 Band members from early days return and share the nostalgia. Those interested to join can go to www.phband.com or email [email protected] INQUIRER/Marisa Roque

Kenneth Villaseñor, 25, joined PHB in 2000 as a seven-year-old clarinetist/instrumentalist.  He then played the trombone for two years, and for his last three years, he has played the tenor drum and the quintuplet drum.  Today, he is an aspiring architect, working full time as a technologist in architecture.

When asked why he came for the homecoming, Kenneth gave credit to the band:  “PHB brought me out of my shell–it is a good ‘incubator’–gave me an idea of how to approach situations, I grew into a leadership role in PHB, that’s what gave me confidence.”

Carol Banez, PHB president, gave the closing remarks, praising the members for their loyalty to the band, and encouraging them to spread the word and invite new generations of Filipino Canadians. She pointed out the fresh faces and talents of young instrumentalists and majorettes who have just recently joined the band.