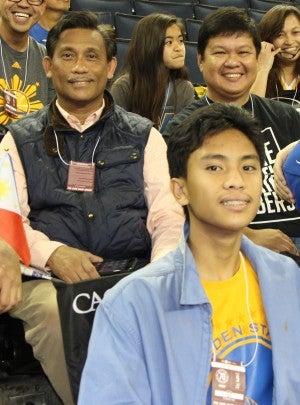 OAKLAND, California – Diehard Filipino American fans of the Golden State Warriors once again whooped it up at another successful Filipino Heritage Night held at Oracle arena here recently where the Warriors whipped the spunky Phoenix Suns 133-120, thanks to Klay Thompson’s 30-point output.

A tailgate party with Filipino food trucks began early afternoon before the game, keeping Filipino basketball fans occupied with the variety of dishes were offered — from sisig, Filipino barbecue, donuts and even fusions of Mexican burrito and Filipino silog varieties, among others.

Main feature of the tailgate was a photo booth where early birds could have their pictures taken with the two most valuable player trophies of top Warrior player Steph Curry. 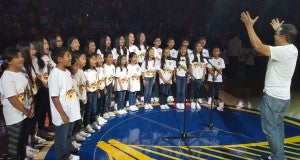 “When we started it was only one heritage night per season, but it became so popular and always sold out it that, starting a couple of years ago, became two heritage nights per season,” Perez recounted.

“This particular night’s tickets were sold out even before they started promoting it. And that’s good because it is encouraging the Filipino community to come out and support this. I now also see a lot of youth and millennials and that means they are also able to connect to their Filipino roots. And we’re hoping that this event will spark cultural pride and community empowerment.” 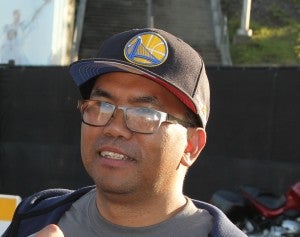 Perez added that there a lot more food trucks, a cooking demo at the Nipa food section this year, making the event a little bit more fun, participative and different.

“Every year, the Filipino Heritage Night gets bigger I am so proud so lucky I have been here the past 13 seasons. I remember before we didn’t even have shirt or anything like that but now we have shirts, caps, apparel we are celebrating on the court. The players get to wear the Filipino-inspired shooting shirts,” Finn said.

At the singing of the national anthem, Golden State Warriors players in their Filipino-inspired sweatshirts stand in attention with some Filipino children in front of them. INQUIRER/Jun Nucum

“When friends from other countries see me through those in-house feed with no commercials and say we saw you, I feel proud that a Filipino being seen even outside the U.S. because I know I am making an impact,” shared Finn, who also longed for the heritage night when the arena is filled with 20,000 cheering Filipino fans.

Seen at the tailgate was the family of Ferdinand Suba from Fremont who came with his whole family. 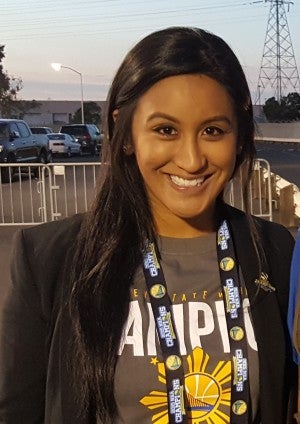 Filipina Golden State Warriors group sales manager Maria Valdehueza feels honored and proud to be with fellow Filipinos young and old as being around them “is a good and proud moment for me to be amongst other Filipinos. INQUIRER/Jun Nucum

“I came to watch the Warriors game on a Filipino Heritage Night with my family to also expose my children to what it feels enjoying the Warriors game with fellow Filipinos some of whom are also here early for the tailgate before the game. As a Filipino watching the Warriors game I feel very proud, the culture, the history and the people even though I was already born here and lived in the Philippines for a while,” Suba disclosed.

Joshua Reyes and his team at the Nipa food section provided free food for the early birds at the tailgate. 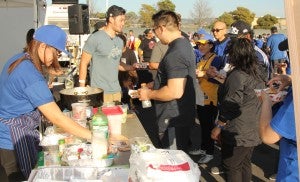 Food is distributed free in Nipa booth during tailgate before the game at the garage area of Oracle Arena. INQUIRER/Jun Nucum

“We are a small team of pop-up restaurants that takes in a bunch of really talented Filipino chefs and present the community with Filipino-inspired cuisines and who are trying to move Filipino food to the mainstream,” explained Reyes.

“Being in the Warriors Filipino Heritage Night is truly amazing as it is flattering just thinking how much Filipino food has gone so far. If you notice, not everyone here in the tailgate is Filipino. You see non-Filipinos enjoying the food and the culture. And that really is what we are all about—spreading the love and culture uniquely Filipino,” Reyes observed. 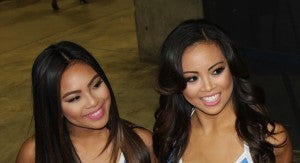 Herding a pack of Filipino children on hand for the game was Philippine Consul-General in San Francisco Henry Bensurto, Jr.

“I think this is a testament to what the Filipino community has done for the San Francisco Bay Area, a recognition of what it has contributed to the community here and what the Filipino power is. And that is why I brought all the kids with me,” Bensurto stated. “The Warriors are also very much like the Filipinos in that they are very resilient in the face of great odds.”

Filipino Heritage Night is also a bonding time for the family as Ferdinand Suba from Fremont brought along his kids to experience Filipino culture while they wait for the start of the game at the tailgate section in Oracle Arena garage. INQUIRER/Jun Nucum

Also on hand for the game were the youth from the United Playaz led by Executive Director Rudy Corpuz who felt “fantastic to be with the NBA champion team Golden State Warriors on a Filipino Heritage Night.”

Before the start of the game, scores of Bay Area Filipino kids with the Bantay Bata Foundation led by music director Noriel Advincula sang the U.S. national anthem in front of the capacity crowd. 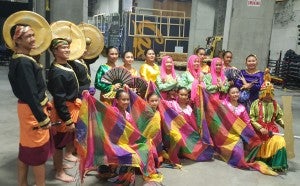 Another set of Filipino schoolchildren from the American Center for Philippine Arts performed a native Filipino dance, clad in colorful costume during the halftime break to the delight of the crowd.

Speaking for the Golden State Warriors organization, Filipina GSW manager for group sales Maria Valdehueza said it was “a good and proud moment for me to be among other Filipinos.”

“Filipinos love basketball. The fact that we do this and host a good event for them is something that I appreciate and will cherish as a fellow Filipino,” she added. 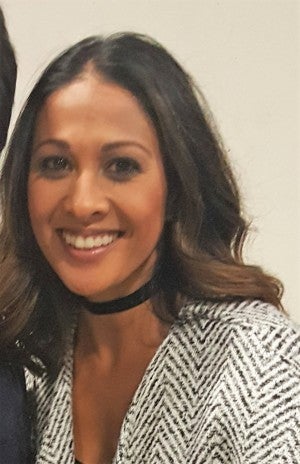 GSW dance director Sabrina Ellington whose mother comes from Tondo in Manila said that one of the biggest games in the Bay Area is actually the Filipino Heritage Night, before blurting out a Filipino-accented, ”Ang nanay ko ay Pilipina mula sa Tondo.” is what

Filipina GSW cheerleaders Jackie and Keyla, who are on their second year with the organization, also felt great excitement during the Warriors Filipino heritage night.

“Seeing Filipino fans watching and cheering us make us want to perform even better. It is great to share what we have learned with the Warriors and share it with the Filipino community here for we really enjoy what we can offer to them and it is nice to keep them in the audience,” Keyla stressed.