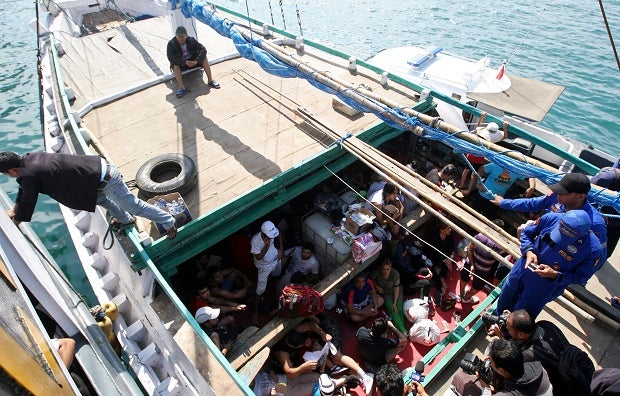 In this file photo, Iranian asylum seekers who were caught in Indonesian waters while sailing to Australia, sit on a boat, at Benoa port in Bali, Indonesia. Australia is in talks to send refugees who try to reach its shores illegally to the Philippines, the immigration minister said in Canberra Australia. Australia refuses to accept any refugees who attempt to reach its shores by boat, and pays Nauru and Papua New Guinea, which has a detention center on Manus Island, to hold them instead. AP

President Duterte has lashed out at the “hypocrisy” of the West for closing borders to an exodus of refugees he said he would welcome to his country and accept until it was “filled to the brim.”

In a short documentary broadcast Thursday by Al Jazeera, Mr. Duterte lambasted critics for complaining about his deadly war on drugs and railed at the United States for “bullying” that he said someone had to stand up to.

He accused the US of double standards and said where human rights were concerned the Philippines was in the same league as the US, where “bigotry is very much alive” and where police kill innocent people, not drug pushers.

In interviews crammed with expletives, the 71-year-old former mayor spoke warmly of Beijing and Moscow, describing Chinese President Xi Jinping as “a very courteous person” and Vladimir Putin as a man who was sincere.

Commenting on the refugee exodus that has plagued Europe, Mr. Duterte said Western countries had failed those most in need and the Philippines, a developing country of 100 million, was willing to take them in.

We will accept them

“They can always come here, and will be welcome here, until we are filled to the brim,” he said.

Since he was elected in May, Mr. Duterte has been shaking up the Philippines and scoring high approval ratings, despite his hostility towards ally the US and an anti-drug campaign that has killed more than 2,400 people.

Many of the deaths have come during police operations to arrest suspects, but some are believed to be the work of vigilantes.

Duterte has denied responsibility for unleashing a wave of vigilante killings and denied that gunmen were hired by authorities to carry out hit-and-run killings.

But he said he would take the law into his own hands if his own family members were killed, saying, “I will kill you.”

Asked if that meant he was encouraging vigilantism, he responded: “Yes I am encouraging. So what’s wrong now?”

Duterte said he was “pissed off” hearing criticism from the West about his drugs crackdown.

“If I look like a bad boy to them I really do not give a sh*t,” he said. “Who are they to me? They are nothing.”—REUTERS