Duterte in Peru for Apec; to meet Putin, Xi 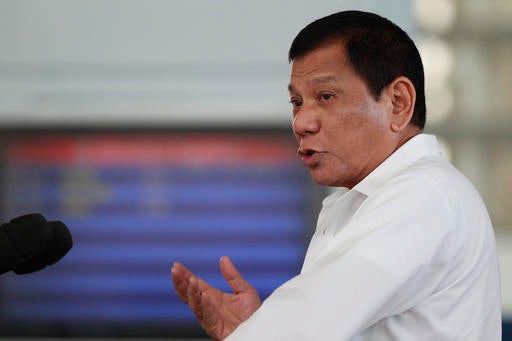 LIMA, PERU—President Duterte arrived here Thursday evening (Friday in Manila) for his maiden appearance at the Asia-Pacific Economic Cooperation (Apec) forum, where he is also expected to hold meetings with Presidents Vladimir Putin of Russia and Xi Jinping of China on the sidelines.

Mr. Duterte was welcomed by Peruvian Minister of Culture Jorge Nieto and Peruvian Ambassador to Manila Julio Cardenas Velarde as he alighted from the presidential plane at the Jorge Chavez International Airport shortly before midnight here, officials said.

The Apec Economic Leaders Meeting officially commences on Nov. 19, and he has no scheduled public appearance on Friday.

But no meeting has been arranged between Mr. Duterte and outgoing US leader Barack Obama, whom the Filipino president has repeatedly criticized.

A request, however, emanated from China,  Yasay said.

“We are still going to confirm that. Most likely it will be a pull-aside, likewise with Russia,” Yasay said, adding that Peru, the host country, and a few others had also sought bilaterals with Mr. Duterte.

“But I would imagine because of time constraints—just travel from Manila to Lima is exhausting for the President—it might not be possible to accommodate all the requests,” he said.

As for the prospect of meeting Putin at Mr. Duterte’s own request, Yasay said he was hopeful it would push through, though he admitted nothing has yet been finalized.

Apec is an economic, trade and investment forum among 21 Pacific Rim countries, including the Philippines, the United States, China and Russia. It’s a year-long series of ministerial discussions that culminate in the Economic Leaders Meeting.

The member economies of Apec account for approximately 40 percent of the world’s population, an estimated 55 percent of world GDP, and about 44 percent of global trade.

Yasay said that while China and Russia may be emerging as the Asia-Pacific’s new powers, the  United States “still is arguably the most powerful nation on Earth.”

There is a perceived shift in geopolitics in the region, after President Duterte’s pivot toward Asia and the election of billionaire Donald Trump as the next United States president, he said.

But it did not necessarily mean that US influence in the region was waning or that it would refrain from exercising its influence as Trump takes the helm.

“They have just shifted their priorities, and there have been some responses insofar as the shift of priorities is concerned…The rebalancing has generated some kind of concern but I think America, even in spite of changes in the leadership as a result of the recent elections, will continue to lead,” Yasay said.

“The United States arguably is still the most powerful country, nation, on earth, and it will continue to exercise its influence. I understand that in retaining that influence or the maintenance of the influence will be in pursuit also of its paramount national interest,” he said.

But China’s growing economic and military might should not be overlooked as countries in the region look for alliances, he said.

He said small countries like the Philippines have become more conscious about “political realities.”

“So yes, these are changing times, very challenging times and to me, more important than a change in world order as you put it, would be our response in meeting the challenges that this new world order would change or would pose,” Yasay said.

But seeking partnerships with China or Russia did not mean new military alliances, only that “old paradigms will have to change,” he said.

Read Next
Duterte already in Peru; may meet with Putin, Xi on Saturday
EDITORS' PICK
Cherry Mobile teams up with Cloud Panda PH, launches online store
PNP charges 301 village execs for corruption in SAP cash aid payouts — DILG
Recall of VFA abrogation won’t affect senators’ petition at SC — Drilon
‘I am a natural-born Filipino’ — Gabby Lopez
Leveling up your ‘lutong bahay’ with the kitchen companion you never knew you needed
ABS-CBN’s Gabby Lopez attends House franchise hearing
MOST READ
MMDA to sue, slap P1,000 fine on bike group
MMDA: Commuters to blame for chaos
‘I am a natural-born Filipino’ — Gabby Lopez
Calida ‘just the lawyer, not the client’ and must ‘never lose his cool’ – Macalintal
Don't miss out on the latest news and information.