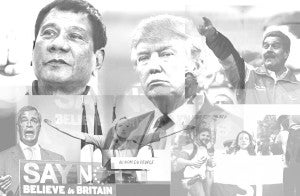 We should not be under any illusion that a highly educated, social, political and economic elite is still fully in charge of the Philippines’ political direction.

This privileged elite is vastly outnumbered by a newly empowered electorate, which has yet to share in the fruits of the country’s recent economic progress—an electorate no longer keen on blindly following their lead, and one that is predisposed to favoring change, in almost any form, over reason.

If any of this sounds familiar, note that this drama unfolded in the Philippines long before the surprise Republican win in last week’s U.S. presidential election uncovered a similar state of affairs in America.

Despite being the most equitable system of governance, democracy and its free and fair elections often deliver seemingly unreasonable results.  Today, the new normal in democracies is the steep electoral price to be paid by any nation that has institutionalized an inequitable distribution of wealth, opportunity and power for too long.

The cost?  The awakening of a marginalized majority—a sleeping giant—rising in revolt against the status quo; raging with newfound strength against any opposition or minority; invoking what 19th century political scientist Alexis de Tocqueville referred to as the “tyranny of the majority.”

In an accelerating pace around the world, we’ve seen what seemed to be sensible, logical and predictable election outcomes trounced by campaigns previously thought of as fringe movements: Trump’s presidential win in the U.S.; the U.K.’s Brexit; Colombia’s failed peace referendum, to name a few. Populist movements are now gaining ground in France, Germany, the Netherlands, and other European nations.

Participation in the Philippine political process has been on an upward trajectory for years.  Based on data from the Commission on Elections, between the 1998 and 2016 presidential elections, turnout increased by over 37% to 43 million voters, compared with a population increase of only 25% in the same period.

The Philippine political environment has not been immune to the rising tide of anti-globalism and a worldwide resurgence of ultra-nationalism—trends that have enabled major populist movements to take hold in an increasing number of countries.

Recently, a large portion of a once silent majority who were living with a long dormant sense of pride and self-esteem finally found an outlet—if not a voice—in Rodrigo Duterte, elevating him to the presidency. In addition, the Philippines’ youthful population (with a remarkably low median age of 23) produced a force of energetic and politically active millennials who were absent from the major political upheavals of the past and were ready to embrace a new cause of their own.

Adding fuel to this mixture was the widening wealth disparity between the burgeoning upper classes and the larger underserved and underprivileged population, who clamored for a bigger share of the economic boom—a pattern all too familiar to developing countries that have experienced rapid GDP growth.

Nothing galvanizes a movement more than a common foe. This partly explains why early on, the new administration in the Philippines (having ridden to power on a wave of anti-establishment discontent aimed at the previous administration) won widespread support for its controversial war against drug peddlers and users who were allegedly transforming the nation into a narcostate.  Shortly after, the fire of nationalism was easily fanned by a policy shift against the U.S., a former colonial master accused of advancing a one-sided agenda to the detriment of Filipino sovereignty.

Like other nations that have been rocked by populist movements, the Philippines has an enormous base of disgruntled citizens who have long felt disenfranchised and economically excluded by an elite ruling class, but are now finding relevance and a fresh ability to revolt through social media and the ballot box.

The danger, as seen in recent populist movements worldwide, is that marginalized groups—in their desire for radical and immediate change—are highly vulnerable to rhetoric advocating simplistic, extreme solutions against the most convenient targets.

Unchecked, the momentum of these underrepresented but now highly motivated masses often lead to demands for outcomes much sooner than is practical, a situation that tends to push governments to undercut the rule of law, ignore proven economic principles, or perhaps suspend rights and freedoms in order to achieve rapid results.

History has given us many examples when such inclinations have been allowed to reach critical mass; one of the most recent being Venezuela’s economic implosion and descent into authoritarianism after its extreme poverty-alleviating socio-economic policies went awry.

The Philippines can ill afford to take its focus away from making poverty reduction and GDP growth absolute priorities. The hope, however, is that the Philippine leadership would never be forced to entertain extreme solutions in response to the growing volume of discontent, and that the electorate would neither seek nor allow such shortcuts.  But until the chasm between the overprivileged and underprivileged is narrowed by the adoption of more inclusionary economic policies, the danger will remain.

The success of anti-establishment campaigns in the U.S. and Europe is a wake up call for the Philippine elites to begin addressing the needs of those outside their circle now; it’s time to start shedding any pretense that their control and influence are preordained and perpetual. They now only serve at the pleasure of an active new electorate that can impose nearly any kind of change by installing like-minded leaders in positions of power.

But these empowered masses must also accept that positive change takes time; changing tack haphazardly may delay progress. As illustrated by other Asian nations that have made it into the First World: In order to effectively address adverse social conditions and financial disparity across classes, broad-based growth is required.  Patience is warranted as a sustained rise in the tide of economic progress begins to provide the foundation for broader participation; all citizens will then get an opportunity to be lifted alongside.

Obviously, a long overdue constructive relationship needs to be forged between members of the majority, whose welfare has been largely ignored for years, and the establishment elites whom they greatly distrust and disdain (a difficult task if ongoing online and media wars between social factions are any indication). But the empowerment of a new kind of entrepreneurial, forward-thinking, skilled and upwardly mobile population hinges on the effectiveness of this cooperation and transfer of knowledge.

One thing is clear though: The old model of a highly educated social, political and economic elite calling all the shots is dead.  We must accept a new paradigm where the tyranny of the majority now rules supreme.  It is time the needs of the underserved masses are met with focused attention, or risk inviting change in the most authoritarian of ways.