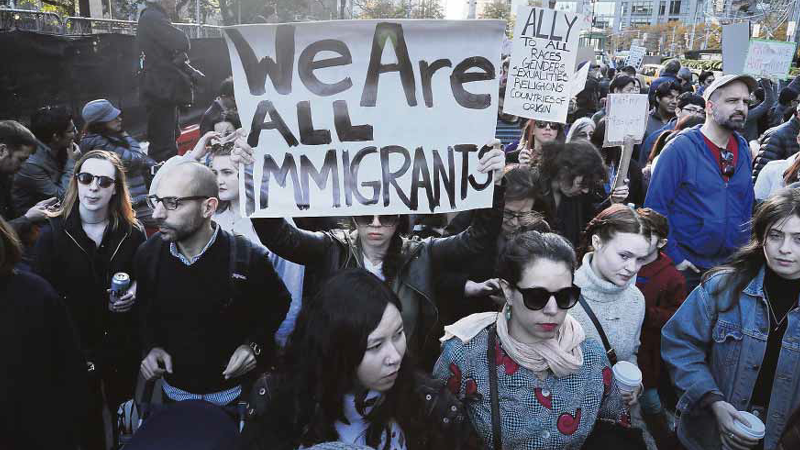 NEWYORK PROTEST Thousands of people, many of them supportive of immigrants, protest the election of Donald Trump outside one of his properties in New York. —AFP

Only Filipinos living in the United States illegally are facing deportation under the administration of incoming US President Donald Trump, and their number is small, according to Labor Secretary Silvestre Bello III.

But even those few Filipinos who would be arrested and processed for removal could look to the Philippine government for help, Bello said on Tuesday, seeking to ease fears caused by Trump’s declaration that he would deport up to 3 million illegal immigrants.

In an interview on the CBS program “60 Minutes” on Sunday, Trump, who would take office on Jan. 20, said his priority would be to remove illegal immigrants who had criminal records.

Get out or get locked

“We have a lot of these people, probably 2 million, it could be 3 million,” Trump said. “We are getting them out of our country or we are going to incarcerate.”

He did not mention undocumented aliens, but said other illegal immigrants would be dealt with after the border had been secured and criminals deported.

There are 3.5 million Filipinos living in the United States as of 2013, the year for which latest figures are available. Of those, 271,000 are undocumented.

They are the ones most vulnerable in the planned crackdown, although it could take years before they are expelled, given the long legal procedures for removal required in the United States.

Bello urged undocumented Filipinos in the United States not to wait for the crackdown and instead come home.

“It’s better that they come home now,” he said, adding that the Duterte administration intended to lure back migrants with a business and employment program.

Without providing numbers, Bello said most Filipinos in the United States were documented, including seafarers who serve as crew on cruise ships.

“Most of them are based in Florida,” he said.

The Department of Foreign Affairs (DFA) is also confident that not too many Filipinos in the United States will be affected by Trump’s anti-immigrant policy.

In a statement issued on Tuesday, Assistant Secretary Charles Jose, spokesperson for the DFA, said Trump’s goal of deporting up to 3 million illegal immigrants “should be put into context.”

“For years, the US government has had in place a system where … authorities deport illegal immigrants in a timely and orderly fashion,” Jose said.

“Occasionally,” he said, Filipinos had been among those arrested for violation of immigration laws and other crimes.

Even then, he said, “[a] vast majority of the 3 million Filipinos residing in the United States have legal residency or citizenship status, pay their taxes and generally obey American laws.”

Trump’s policy, then, is not too worrisome, Jose said.

“We … do not expect President-elect Trump’s immigration pronouncements to have a calamitous impact on the Filipino community there,” he added.

US investments in PH

Bello said he was not worried that Trump’s victory in the US presidential election could have adverse effects on the Philippine economy, specifically losing US investment in the business process outsourcing (BPO) industry that would lead to massive job losses.

“We are not worried. We believe foreign investments will continue to come, including the BPO industry. I think there will be no negative effects considering that the BPO sector came here because of practical reasons—the cost of labor there is higher [than] here,” he said.

American investors come to the Philippines for business, he said.

“As long as the climate is there for the conduct of their business, they will stay,” he said. —WITH A REPORT FROM NEW YORK TIMES NEWS SERVICE