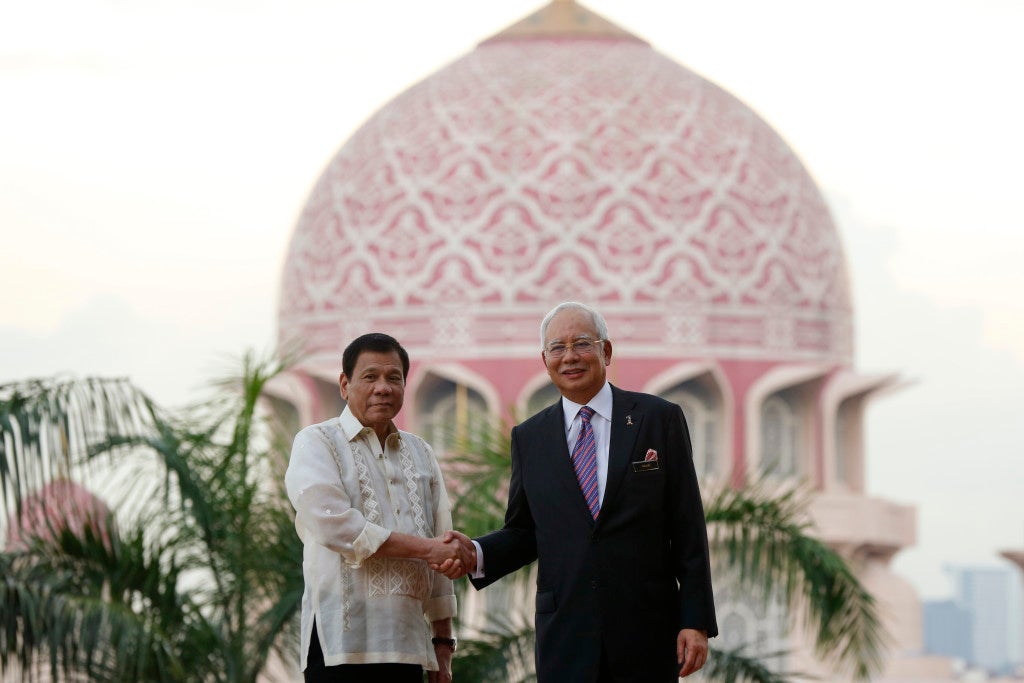 PUTRAJAYA, Malaysia—The Sabah issue was placed “on the back burner” during the bilateral meeting of President Rodrigo Duterte and Malaysian Prime Minister Najib Razak on Thursday here.

“We both agreed that we will set the Sabah issue aside and not even talk about it for now,” Foreign Affairs Secretary Perfecto Yasay Jr. told reporters after Duterte and Najib’s meeting.

“We had set the Sabah issue on the back burner, on the side, and we agreed to engage ourselves more vigorously on the area of trade and investment and the other aspects of mutual cooperation,” he said.

Yasay said the issue was discussed only in passing by Najib, who said “that talking about Sabah at this point in time is not a good idea because we would not be able to come up with solutions as yet.”

“It may not be resolved within shortest possible time. It may take many years before we could find a workable and acceptable solution,” Yasay said.

The foreign affairs chief said the Philippines’ sovereign issue on Sabah “will not stop us from pursuing the other aspects of our relationship which is really more important at this time.”

“As I say, it was discussed tangentially in terms of how we would be able to go ahead with the other aspects of our relationship,” he said.

“There was really no discussion of Sabah. The prime minister immediately, in fact, said that he agrees with what has been articulated even in the past,” he added.

Yasay said the President also raised the condition of Filipinos in Sabah.

“(The) President (raised) the question of how we can assist our Filipinos in Sabah who are in dire need of education and they are not provided because they are considered illegals there,” he said.

The need for health services for Filipinos in Sabah was also discussed.

Apart from the condition of Filipinos in Sabah, the issue on sovereign claims was not discussed.

“There are a lot of contentious issues that we have to address, very complicated. I would imagine that it is more complicated than the South China Sea disputes that we have. But if you’re asking me the exact words, I could not remember exactly but if you ask me exactly what was intended was that we both agreed that we will set the Sabah issue aside and not even talk about it for now,” he said.

“As I’ve said, it will come, proper time will come in the future and I hope it will be soon but if not it should not stop us in proceeding and strengthening the other aspects of our relations,” Yasay said.