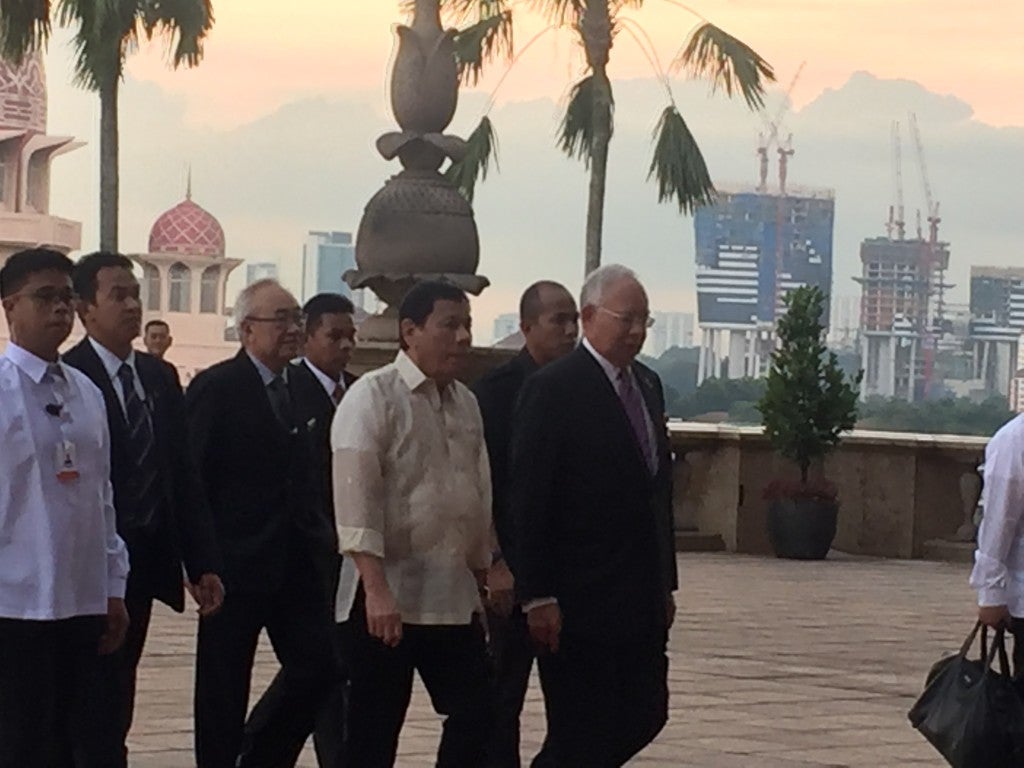 President Rodrigo Duterte on Thursday afternoon met with Malaysian Prime Minister Najib Razak in a bid to strengthen the bilateral relations between the two nations.

PUTRA JAYA — President Duterte was given full military honors when he arrived at the Putra Square here around 5 p.m. Thursday.

Duterte, who motored for nearly an hour from the capital Kuala Lumpur along with several Cabinet members and Philippine National Police Director General Ronald Dela Rosa, firmly shook hands with Malaysian Prime Minister Najib Razak, who led him to the Prime Minister’s Office after the welcome
ceremony.

The two officials then talked behind closed doors in what was described as the “Four Eyes Meeting” inside Najib’s office.

It was uncertain what the two leaders –who visited Beijing one after the other — really talked about but Malacañang earlier said they would talk about security in the Malacca Straits in the wake of the activities of the Abu Sayyaf.

Duterte earlier said he might raise the issue of Sabah with Najib but it was unclear if he indeed managed to do that.

Malaysia has maintained that the claim of the Sulu sultanate over Sabah, which Duterte had declared support for during the campaign, has no basis as the issue had long been settled when the people of Sabah voted to join the Malaya Federation in the 1960s.

Najib also treated Duterte and other officials to a state dinner here, the Malaysian center of government.

After several more activities involving the Malaysian Prime Minister, which were expected to last until late evening, Duterte will depart for the Philippines.

A Palace advisory said he would leave Kuala Lumpur at 10 p.m.

Duterte has embarked on foreign trips mainly to country-members of the Association of Southeast Asian Nations (ASEAN) and Asian countries during the past four months of his presidency.

But on November 22, his first trips outside of Asia will start as he will fly to New Zealand before attending the Asia-Pacific Economic Cooperation meeting in Lima, Peru.  SFM