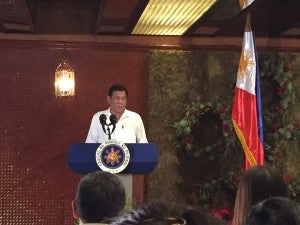 He congratulated Trump after his win over Democratic candidate Hillary Clinton, whom President Barack Obama actively campaigned for.

“We are both foul-mouthed. We curse even the smallest things,” he added.

In his previous speeches, Duterte repeatedly lashed out at the US, threatening to sever the country’s ties with its longtime ally.

In an ambush interview, Duterte said he expects Trump to fulfill his promises to the Americans.

“I would like to congratulate President Trump for his victory and I wish he will govern the way he promised the American, people,” he said. “Mabuhay ka.”

On the future of the Philippines-US treaties, Duterte also expressed optimism. “I never wanted quarrel with anybody so I wished President Trump that he will honor our obligations and treaties with the US,” he said.

Asked if the Philippines’ relationship with the US under a Trump presidency would be improved, Duterte said, “I really don’t know because it would depend on the US.”/atm