PH to end assault drills with US forces | Global News

PH to end assault drills with US forces 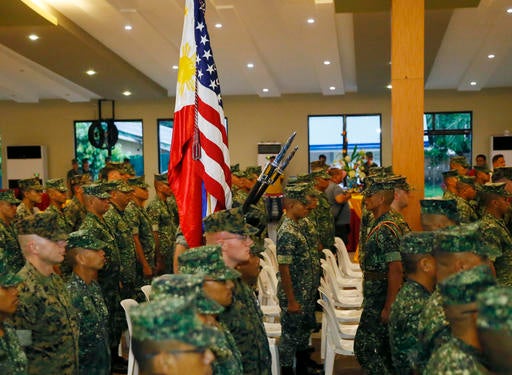 U.S. Marines from the 3rd Marine Expeditionary Brigade and their Philippine counterpart stand at attention at the exit of colors to end the 33rd joint U.S.-Philippines amphibious landing exercises dubbed PHIBLEX at the marines corps in suburban Taguig city, east of Manila, Philippines Tuesday, Oct. 11, 2016. AP

MANILA, Philippines— Philippine defense officials say President Rodrigo Duterte has approved the continuation of joint military exercises with U.S. forces, but the number of drills will be reduced and will exclude mock assaults.

Defense Secretary Delfin Lorenzana said Wednesday that Duterte also allowed the government to proceed with a 2014 defense agreement with Washington permitting U.S. forces to be stationed temporarily at five designated Philippine military camps, along with their warships and planes.

Duterte had previously threatened to end military exercises with the United States.

Lorenzana said he and other security officials explained to the president at a Cabinet meeting on Monday how the Philippines benefits from the annual maneuvers.