SF ‘libing’ protesters ‘Prayed for 8’ to no avail 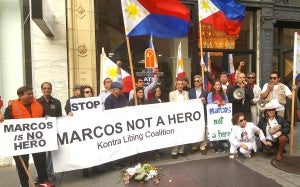 SAN FRANCISCO — Groups opposed to the burial of former President Ferdinand Marcos as a hero went back in front of the Philippine Consulate to “Pray for 8,” the number of Supreme Court justices they hoped would block the late dictator’s inclusion in the national cemetery reserved for heroes. Their prayers went to naught.

Held to coincide with the concert rally held in Manila and protests Los Angeles and other places, San Francisco rallyists vowed to keep on even as the Supreme Court decided to allow the burial of Marcos Tuesday, Nov. 8.

Protesters prayed, chanted anti-Marcos slogans, described life under Martial law, offered flowers for the victims of the dictatorship and tore pictures of Marcos.

Lawyer Rodel Rodis urged everyone to continue the fight on.

“We have to continue the struggle because this is more than just Marcos. This represents what Marcos did to the Filipino people and to all of us. We must make sure that if Marcos is buried that we later on take him out of there. He does not belong in a place for heroes. The fight will go on,” Rodis exhorted. 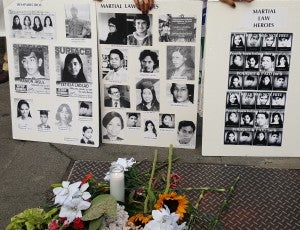 “The Constitution was drafted after Martial law, after Marcos was deposed and to ensure there would be no other Marcos. So all the provisions including the anti-dynasty could not happen again were included,” Rodis explained.

Rodis feared pro-Marcos justices whom President Gloria Macapagal Arroyo (GMA)-appointed, and who also acquitted her from all corruption charges filed against her, would vote in favor of the Marcos family. Another Arroyo appointee, however, Senior Associate Justice Antonio Carpio dissented from the Arroyo acquittal.

Longtime Marcos critic Ted Laguatan believes that “any decent human being, every decent Filipino” should protest the burial of Marcos as a hero, which President Duterte has allowed.

“Marcos stole billions of dollars from the Filipinos, killed a lot people. This is an embarrassment to the whole world. The world is not blind. The world can see that what Duterte is doing is promoting a man who committed a lot of evil. The world will not be silent about this,” Laguatan added.

Leading the prayer for victims of the Marcos, Tondo-born and raised Pastor Israel Albaran of the United Methodist Church, intoned: “We seek justice for every life that has been taken without due process. We seek justice against any law that harms all of God’s children. We pray for all those that died, disappeared, tortured and imprisoned by the Marcos dictatorship. We cry out for justice,” Albaran implored.

Martial law human rights victim Lorenzo Listana was a political detainee for six months and was a victim of torture.

“My older brother disappeared May 2, 1979 while his wife was pregnant with their second child. Up to now, there is no trace of him. He is gone and his two kids were orphaned including the one inside his wife’s womb,” Listana recounted, fighting tears. 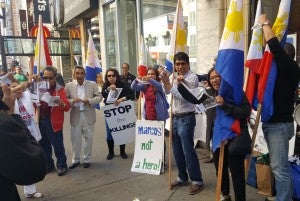 Another human rights victim Susan Araneta related: “In Fort Bonifacio children lived with us in detention because their parents were incarcerated. Women whose husbands were imprisoned had to care for their kids alone and forced to eke out a living at the same time. Mothers whose children were imprisoned had to endure uncertainty of not knowing where their children were or if they have been killed.”

When Marcos was tossed out of power, we sued him for violation of human rights and we won. I hope the Supreme Court considers the fact that Marcos was found guilty by the U.S. court,” Araneta recalled.

“Imee Marcos wants us to forgive her father. Why should we if he took away the best years of our lives and murdered our friends and family members? There was even no remorse. Burying Marcos at the Libingan ng mga Bayani is an attempt to rewrite his infamous legacy,” Araneta said.