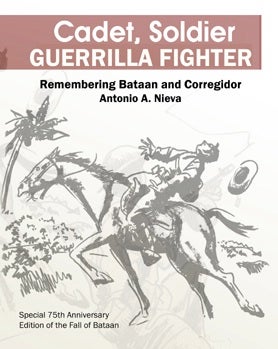 HONOLULU — A few hours after the bombing of Pearl Harbor, Japanese warplanes decimated Clark Air Field north of Manila. It was the first salvo against America’s Pacific colony that escalated into the Battle of Bataan, the largest defeat in U.S. military history, and the Death March that killed about 25,000 American and Filipino soldiers.

Because America prioritized the European arena before focusing on the Pacific, the Philippines came under Japanese rule for four years until General Douglas MacArthur could fulfill his promise to return and liberate the country.

Two books by authors with Hawaii ties are contributing new information to the story of the Pacific War.

Cadet, Soldier, Guerrilla Fighter: Remembering Bataan and Corregidor and The Battle of Ising: the Untold Story of the 130th Infantry Regiment in the Liberation of Mindanao in the Philippines will be launched at the Philippine Consulate on Tuesday, Nov. 29 at 6 p.m. in time to commemorate the December 7 attacks that pushed America into World War II.

“These two books are a much-needed addition to a literature on Filipinos who fought in World War II,” says Dr. Patricio Abinales, head of Center of Philippine Studies at University of Hawaii at Manoa.

“Here are stories of young men who were forced by the circumstances to become ready to die in defense of the homeland. They faced the enemy with very little resources, but the Filipinos and Americans who made their last stand in Bataan and Corridor held back the well-armed and well-trained Japanese imperial army while in the rest of the colonial governments in Southeast Asia collapsed like a house of cards in a week or two.”

Honolulu writer and public relations veteran Pepi Nieva has edited the war stories of her late father, Antonio A. Nieva, a Bataan Death March survivor who joined a storied guerrilla group made up of college boys, the Hunters-ROTC, upon his release from prison camp.

Cadet, Soldier, Guerrilla Fighter blends historical facts with personal vignettes, giving intimate, moving and sometimes humorous accounts of how the war affected soldiers and townsfolk, housewives and society matrons, hustlers and gamblers and the young, idealistic 20-year- olds who fought a guerrilla war in the Philippine barrios and forests.

The book, available on Amazon.com, is illustrated with the elder Nieva’s original drawings and is a rare, firsthand account told from the Philippine perspective.

Marie Silva Vallejo, who lived in Honolulu after working for Intel in California and before moving to Manila, discovered her father’s exploits as the commander of 1,500 guerrillas in Davao province in the southern island of Mindanao.

She interviewed 22 veterans to complete the story of The Battle of Ising and Major Saturnino Silva. While conducting research, Vallejo found World War II records, crumbling from age and exposure to Philippine jungles, in the U.S. National Archives in Washington, DC.

She worked with the Philippine Veterans Affairs Office and the Filipino Veterans Foundation to digitize 270 boxes of Guerrilla Recognition files, which can be used to substantiate compensation claims by Filipino World War II veterans. Vallejo will also do a presentation on how to use these digital records at a presentation on Nov. 29, 11:45 a.m. to 1 p.m. at Moot Courtroom at the Richardson Law School. 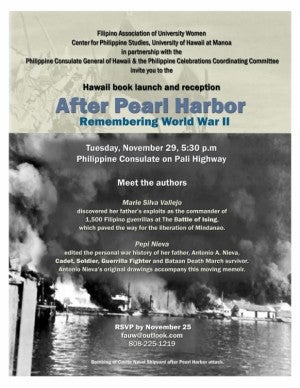 Both Antonio Nieva and Saturnino Silva were awarded Bronze Stars for their service on behalf of the United States Armed Forces. Silva also was awarded the Purple Heart

The book launch and the guerilla records presentation are free and open to the public. The events are sponsored by the Philippine Consulate, the UH Center for Philippine Studies, the Filipino Association of University Women, and the Philippine Celebrations Coordinating Committee.