‘We are happy to be back, Panatag should be open to all’

PANATAG SHOAL—The waters inside the shoal are calm, betraying the tension between Filipino fishermen and Chinese coast guards.

Small fishing boats can sail inside the shoal, but anything bigger is barred by the crew of a Chinese Coast Guard ship guarding its mouth, an apparent concession given by China to Filipino fishermen following President Duterte’s state visit to Beijing last month.

More than a week ago, we hopped into a fishing vessel and sailed for Panatag or Scarborough Shoal from Barangay Calapandayan in Subic, Zambales. After two nights of sailing, we reached our destination at dusk (distance: 270 kms from Subic), and were greeted by the sight of three huge Chinese Coast Guard ships silhouetted against the fading light.

Almost a kilometer from us, we espied Chinese crewmen on their rubber boats approaching two Filipino fishing vessels anchored near the mouth of the shoal, signaling them to leave. 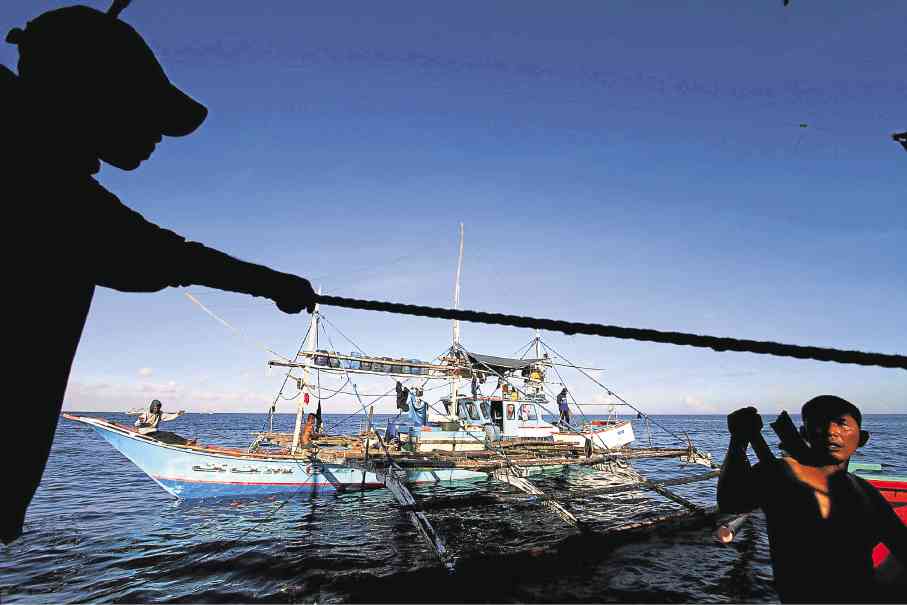 Seizing the day, thanks to the apparent lifting of the Chinese blockade to the lagoon, crewmen haul in a bountiful harvest from the sea.

“They said it was okay to fish. Why are they like that?’” fishing boat captain Aniceto Achina muttered as he peeped through his binoculars. He then maneuvered the seven-meter long fishing vessel away; his 10 crewmen observed. We waited for the Chinese rubber boats to come to us, but they never did. They motored back to the Coast Guard ship anchored at the main entrance.

“That’s it, they don’t want our mother boat to go inside the shoal. They just allow us here outside,” the 40-year-old captain concluded.

As soon as the Chinese rubber boats disappeared from view, the crew immediately released the six small fishing boats from the katig or outriggers of the mother boat into the water, and began to fish.

The 150-square kilometer shoal is ringed by rocks and reefs that serve as a buffer against waves. That’s why inside the lagoon, the water is calm (panatag). Before Chinese ships seized it, Filipino fishermen would seek refuge in the lagoon during storms, and come out safe. 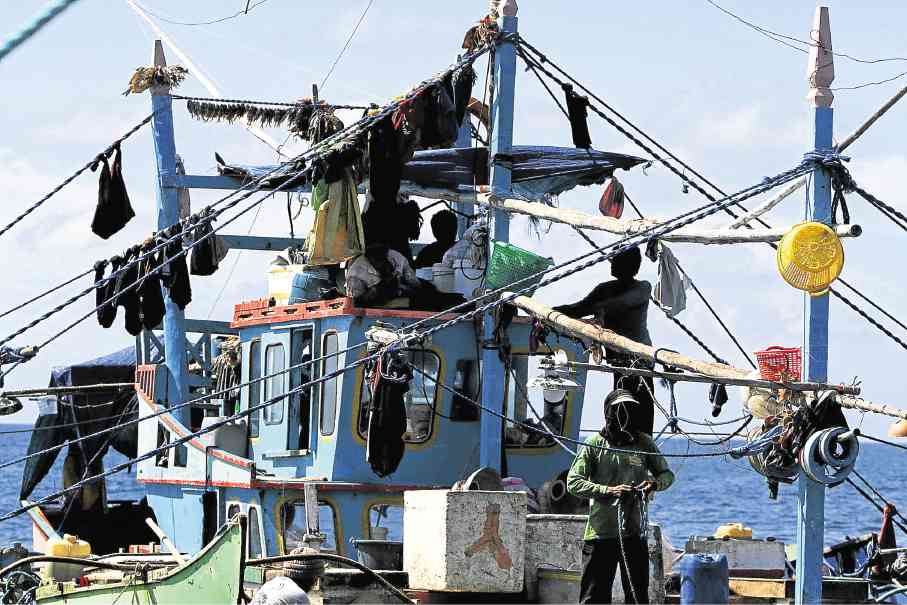 At first glance, this looks like a rickety fishing vessel that is no match to the Chinese Coast Guard ships. But it has survived several cat and mouse games with the bigger, better equipped Chinese ships. And it’s back again at Panatag.

When we were there, fishermen on small fishing boats could go past shallow waters into the lagoon, without needing to go through the mouth, where the omnipresent Chinese ship stands guard.

Elsewhere, three bigger Chinese ships keep a safe distance of 6 to 10 km from the shoal. At times, they are seen roving around the shoal.

At night, we could sense activity from two unmarked Chinese vessels at the shoal, but it was difficult to pinpoint what it was because of the total darkness.

Achina and his crew are regulars in Panatag. Many times they experienced harassment and bombardment with water cannons by the huge Chinese Coast Guard ship that often came close to crashing on them.

They would maneuver to the shallow part of the shoal where the ship could not follow them.

“They chased us. The good thing was we know the shoal much better than them. We know where to run,” Achina said. 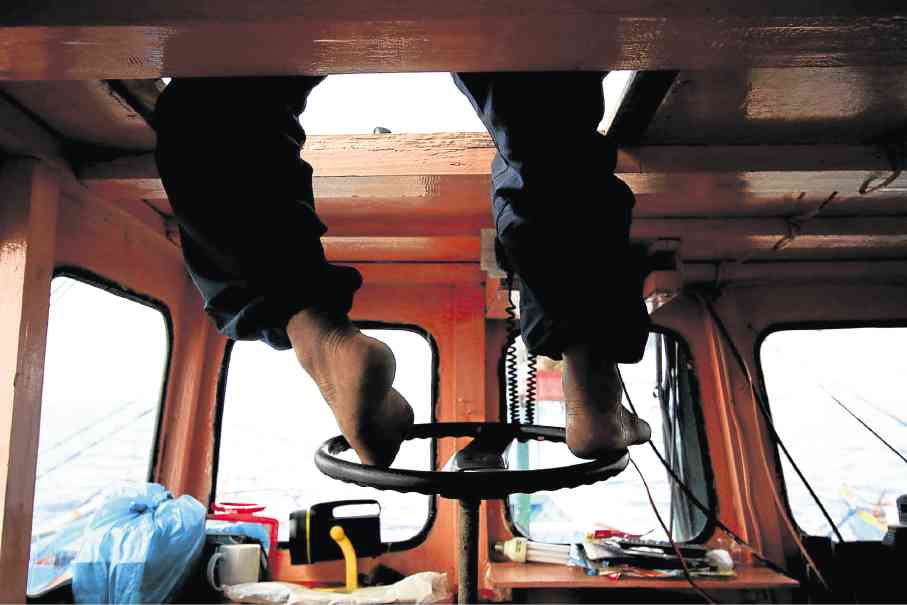 Cooling one’s heels. The skipper watches over the entire crew above thecabin, as he steers the fishing boat with his feet.

But then the Chinese coast guards, armed with guns, would chase them in their rubber boat.

“They did not point their guns at us. They just told us to leave. Our crewmen would hide under the cabin near the engine. I would face them and talk them. I know they won’t kill us,” Achina said.

The fishermen would communicate with the Chinese using hand gestures.

There was a time the cat and mouse game made the Chinese so sick that they allowed the fishermen to stay in the shoal to let a storm pass. During the lull, the Chinese and the fishermen swapped fish, boiled eggs, cigarette and liquor.

Fishing at the shoal is no joke. According to Achina, they had to scrounge for P120,000 from financiers to cover everything: 10 containers of diesel, 16 containers of gasoline, 70 blocks of ice, as well as food provisions and money for their families. 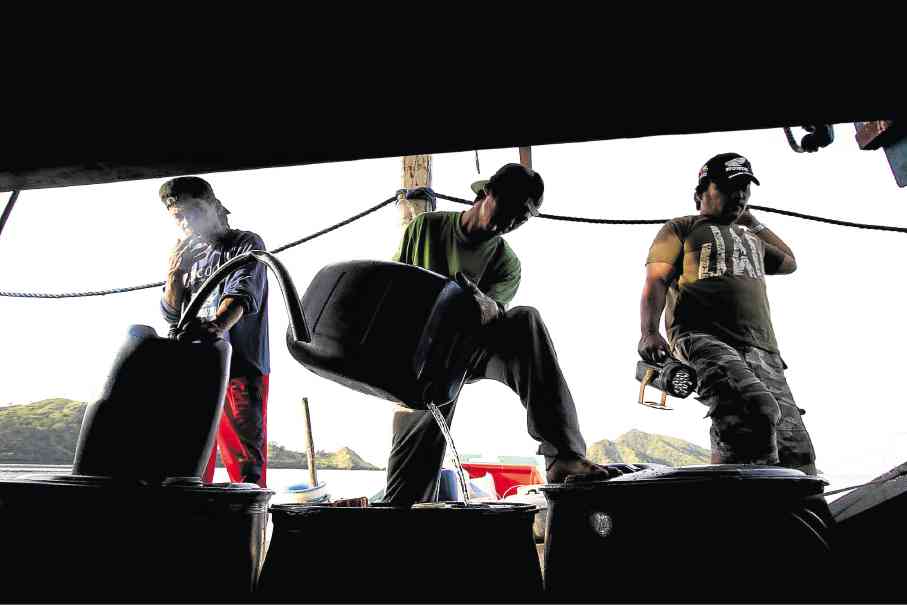 The crew members fill tanks with water that often tasted sweet, but sometimes reeked of diesel and gasoline.

To break even, they need to fill some 18 huge styrofoam boxes with at least 50 kilograms of fish. They split among them whatever they earn in excess of the P120,000.

To catch fish, they throw a hook into the water, and use squid and tuna as bait, a mode of fishing locally called “kawil.” They don’t use “Superlights” as the Vietnamese do to lure fish, much less dynamite fishing which was rampant before the Chinese took over Panatag.

The lagoon is home to a variety of fish such as coral fish, trevally, grouper, snapper, and tuna.

While the captain and his crew were initially hesitant to take me in for obvious reasons, we eventually warmed up to one another during the journey.

After a tiring day of fishing, the weary crewmen slept on the outriggers of the boat. I slept near the generator to keep warm.

“We were happy to be back here. Fishing is hard but this is the only way we know to earn a living. This is what we do to support our family,” Achina said. “Panatag should be open [to all], and be guarded against illegal fishing.” 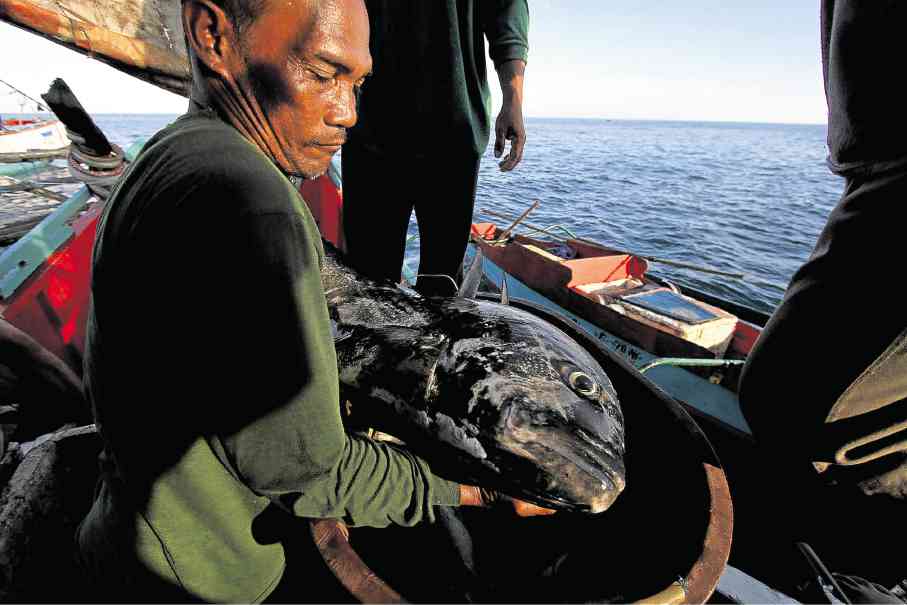 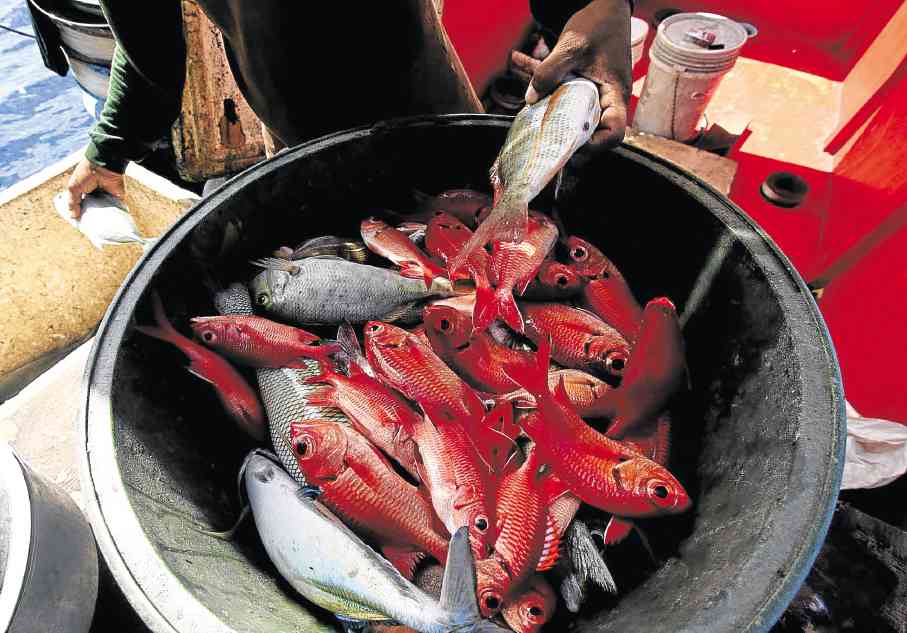 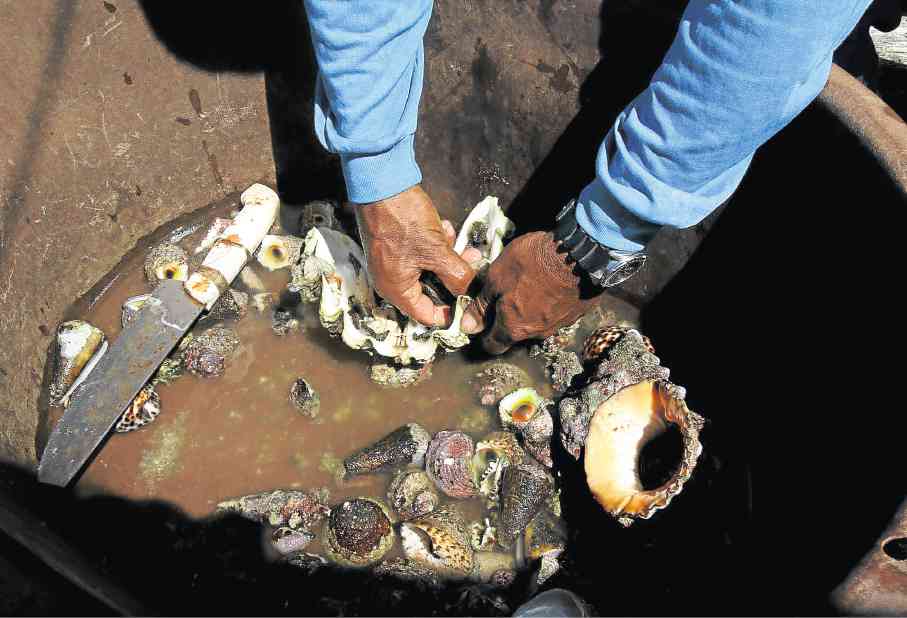 It can’t get any better than this: More catch from the shoal. 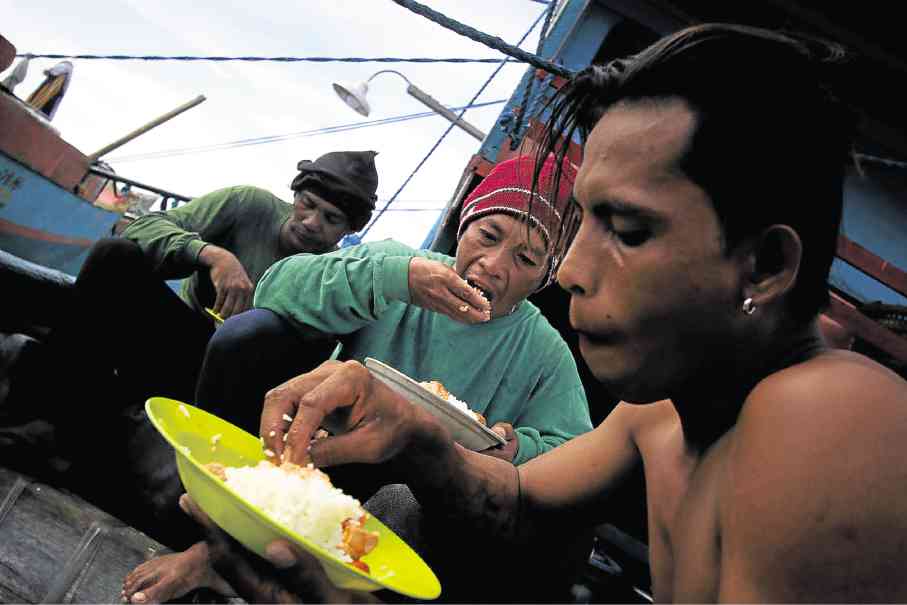