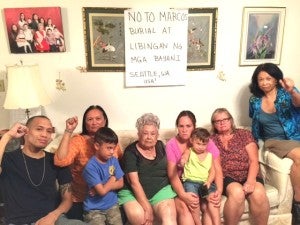 SEATTLE — Whenever Cindy Domingo sees her late brother Silme’s wife, two daughters and four grandchildren at the family Sunday dinner, she feels Silme’s presence. “I think of how happy he would be to see that his family is still connected to the Domingo clan, and how his grandchildren are enjoying being doted on by our 88-year-old mother.”

It has been 35 years since hired killers, members of the Tulisan gang, shot in cold blood Silme Domingo and Gene Viernes, union leaders and anti-Marcos activists, at their ILWU Local 37 offices near downtown Seattle. Viernes died instantly, and Domingo lived another day, long enough to name the gunmen.

After the murderers and co-conspirators, including the president of the union, Marcos underling and town-mate Tony Baruso, had been tried, found guilty and sentenced to life in prison without the possibility of parole, the Committee for Justice for Domingo and Viernes (CJDV), a community-based group led by Domingo’s sister Cindy, pursued justice higher up in the conspiracy. They filed a civil suit naming Ferdinand and Imelda Marcos and other defendants as responsible for the deaths of the two young activists.

After almost ten years of litigation, the Committee achieved justice on December 15, 1989 when a federal court in Seattle found the Marcoses liable for the murders and ordered them to award damages to Domingo’s children and Viernes’ family. The case set a historical precedent. It was the first and only time that a foreign head of State had been tried in a U.S. court and found responsible for the assassination of U.S. citizens.

Both Domingo and Viernes were 29 years old and two of the most promising Filipino Americans of their generation. Besides their sterling academic achievements, they were active in social justice issues in Seattle, such as low-income housing, bilingual services, immigrant rights, and affirmative action.

After martial law was declared in the Philippines in 1972, they joined the Union of Democratic Filipinos (KDP) and participated in anti-dictatorship activities. They played a leading role in the Rank and File Committee of Local 37 and fought discrimination against minority workers at Alaska canneries. They also aimed to institute crucial improvements, such as fair dispatching procedures and elimination of corruption in their union, which had a large concentration of Filipino laborers.

By the spring of 1981, the Rank and File Committee had achieved significant reforms in Local 37. Their members had won most seats on the Executive Committee and key positions in the union. Domingo was elected Secretary Treasurer, and Viernes, Dispatcher.

In addition, at the recent ILWU convention in Honolulu, Hawaii, Domingo and Viernes succeeded in passing a resolution to send an investigating team to the Philippines to look into the conditions of Filipino workers under martial law. The CJDV later concluded that this intersection of their activism, i.e. opposing Marcos and forging solidarity between the American labor movement and workers in the Philippines, threatened powerful forces.

On June 1, 1981, a month after the Hawaii confab, two gunmen descended upon an almost deserted Local 37 office and shot the two union officers, who were working late, with a powerful .45 caliber Mac semi-automatic pistol. Domingo left behind his wife Terri Mast, also a union leader, two daughters, three-year-old Ligaya and one-year-old Kalayaan, parents and siblings. 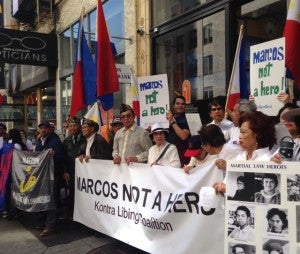 Viernes was survived by his family in Wapato, Washington. The Seattle Filipino and other progressive communities in Seattle and KDP chapters nationwide held memorials to celebrate the lives of Domingo and Viernes and vowed to support CJDV’s mission to achieve justice for the two fallen heroes.

The Bantayog ng mg Bayani (Memorial to Heroes and Martyrs of Martial Law) in the Philippines recognized the martyrdom of Domingo and Viernes in 2011 and added their names on the black granite wall at the memorial center in Quezon City. Members of the families of both men traveled from Washington State to Manila to attend the moving ceremony at the Bantayog.

Friend of the Marcoses

Last August, the newly elected Philippine president Rodrigo Duterte, a friend of the Marcoses, reignited the pain and anger of survivors of martial law by issuing an order to bury Marcos at the LNMB. Survivors of the dictatorship challenged his plan to honor the dictator as a hero before the Philippine Supreme Court, which will issue its ruling, after two postponements, on November 8.

Even in death, Marcos has continued to evoke impassioned feelings because of the legacy of his 14-year one-man rule.

Forbes Magazine had described Marcos as one of the most corrupt dictators in the world, looting an estimated $10-billion from Philippine government coffers and leaving the country saddled with $28-billion in foreign debts. Furthermore, Marcos traumatized the country by depriving the citizens of civil liberties for almost two decades and subjecting them to brutal repression that took a devastating toll on the lives of Filipinos.

Human rights groups estimated that 70,000 Filipinos were jailed, 30,000 tortured, about 3,500 killed, and many activists were disappeared. Yet, no one has been brought to justice for these human rights violations unlike efforts in Latin American countries like Brazil, Chile and Argentina, who also suffered for years under dictatorships. As these nations reverted from military rule to democracy, they managed to achieve some form of transitional justice by bringing to court military officials who committed atrocities and compensating their victims.

After Duterte’s announcement, protests and rallies were launched in September in the Philippines, the U.S., and other countries to protest his decision that has been described by critics as a grave and cruel insult to all martial law victims.

Having participated in the U.S. anti-dictatorship movement in the 1970s, Rodel Rodis, the president of the U.S. Pinoys for Good Governance and one of the organizers of the newly formed Filipino American Human Rights Alliance (FAHRA), did not mince words in expressing his opposition to the elevation of Marcos a hero. 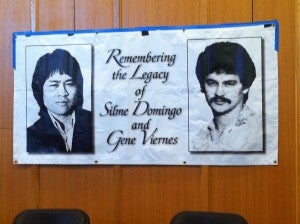 Silme Domingo (left) and Gene Viernes, honored in Seattle on the 30th anniversary of their martyrdom in 2011. KDP COLLECTION

He stated, “The period in Philippine history when Filipinos were viewed in the most positive light by the world was the People Power Revolution of 1986 when the Filipino people kicked out the brutal and thieving Marcos and restored democracy without firing a single bullet or spilling blood. We held our heads high. Burying a hated dictator in a heroes’ cemetery is a shameless and repulsive act. If we allow it to happen, we will rightfully be viewed as a perverse people who would glorify a killer, a torturer and a world-class thief.”

Cindy Domingo, who was at the center of the CJDV, and now Chief of Staff to Larry Gossett of the Metropolitan King County Council in Seattle, was heart-broken when she first heard Duterte’s announcement. She went to the Philippines early this year as part of an international elections observer mission because she was outraged by Bongbong Marcos’ campaign for the vice presidency.

“I was flabbergasted that the biggest defender of his father’s rule could be one heartbeat away from the presidency,” she said. After a tightly contested election, Marcos lost to Leni Robredo, a member of Philippine Congress, a brilliant lawyer and a social activist with a rich experience in grassroots advocacy,

Domingo lamented what she called the whitewashing of the dictatorship and revisionism of Philippine history by the Marcos family and their allies. “Silme and Gene spent the last seven years of their short lives exposing the repressive nature of the Marcos regime and working tirelessly to bring back peace and democracy to the Philippines. To allow Marcos to be buried at the LNMB would be a travesty of the memories of Silme and Gene and the thousands of Filipinos who were jailed and tortured and who gave their lives in the fight to defeat a dictator.”

To prepare for the Supreme Court ruling scheduled for November 8, prayer rallies will be held on Friday, November 4 in front of the Philippine Consulates in San Francisco at 12 noon and in Los Angeles at 4:30 p.m. Various actions are also scheduled in Metro Manila, including rallies and a concert called “Pray For Eight – A Prayer Concert” (Eight represents the number of judges needed to overturn Duterte’s order) at Lapu Lapu Monument, Rizal Park on November 6 at 4 pm, sponsored by the Coalition Against the Marcos Burial in LNMB.