Lawmakers urge Duterte to ratify Paris accord on climate change 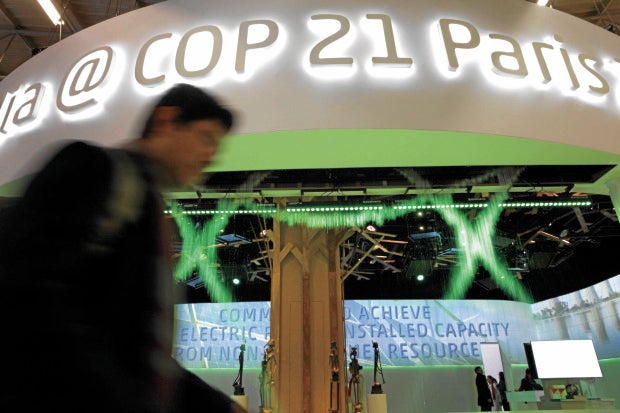 PARISMEET COP21, the United Nations Climate Change
Conference, was held on Dec. 7, 2015, in Paris to seek a solution
among countries to climate change. —AP

Lawmakers have joined the chorus of voices asking President Duterte to honor the Philippine commitment in the Paris climate change pact to lower the country’s carbon emissions by 2030.

Members of the House special committee on climate change said they would try to convince the President to change his mind and to ratify the Paris Agreement on Climate Change, which comes into force on Friday and which Mr. Duterte earlier dismissed as absurd.

At a recent hearing before the congressional break, the committee chair, Ako Bicol Rep. Rodel Batocabe, said his panel would communicate with the President the benefits of adopting the Paris deal after listening to climate change advocates and officials.

“I think we know that the President is reasonable. If we can explain properly to him that we will be allowed to put up coal-fired power plants, then I’m sure that he will change his stance,” said Surigao del Sur Rep. Prospero Pichay Jr.

Sen. Loren Legarda, chair of the Senate committee on climate change, urged the Climate Change Commission (CCC) and the Department of Foreign Affairs (DFA) “to work together for the Philippines’ ratification of the treaty.”

She said she would push for the Senate’s concurrence once it was signed by the President.

“We understand that government is in transition, but we expect that the CCC and DFA have already met with the agencies and have explained the importance of this agreement in our pursuit of sustainable development and climate and disaster resilience,” she said in a statement yesterday.

Under the Paris agreement, 197 countries committed to significantly reduce their greenhouse gas emissions to keep global warming to “well below” 2 degrees Celsius.

The Philippines, under then President Benigno Aquino III, pledged a 70-percent cut in emissions by 2030.

But after his election in May, Mr. Duterte repeatedly expressed misgivings about the pact, threatening at one point that he would not honor it.

He said it was unfair that the country’s economic progress might be impeded by cutting its carbon emissions, even though it was not a major contributor to global warming at all.

His pronouncements stirred criticisms, including from former President Fidel V. Ramos, who wrote in his column that this “is obviously wrong, and full of S … T!!!”

Mr. Duterte has since softened his stance on the subject, saying he will follow the recommendations of his advisers.

The CCC vice chair, Emmanuel de Guzman, said the Paris deal was the product of two decades of debates and negotiations.

“It is only voluntary in nature and undertaken by each party to contribute solutions based on its capacity,” he said.

De Guzman clarified that the Philippine participation to reduce carbon emissions by 2030 was “purely voluntary and only under the condition that mitigation efforts will be pursued if developed countries will invest on it.”

Moreover, the entire contribution target may also be modified into a final submission called the “nationally determined contribution” through multistakeholder consultations, he said.

De Guzman noted that the Philippines had championed the limiting of the global temperature rise to 1.5 C, the enshrining of climate justice and human rights, and ensuring ecosystem integrity.

“The agreement defines climate justice as giving greater burden on developed countries—as likewise articulated by the President—to do more and to act swiftly in reducing carbon emissions, since they are the ones heavily contributing to the temperature rise,” De Guzman said.

The committee had met to discuss House Resolution No. 103 filed by Bayan Muna Rep. Carlos Isagani Zarate, who shared the President’s reluctance to ratify the Paris agreement.

Zarate had said it should be industrialized countries like China, the United States and Japan that should bear the greatest burden “to cut down on their emissions drastically and not demand this from poorer countries.”