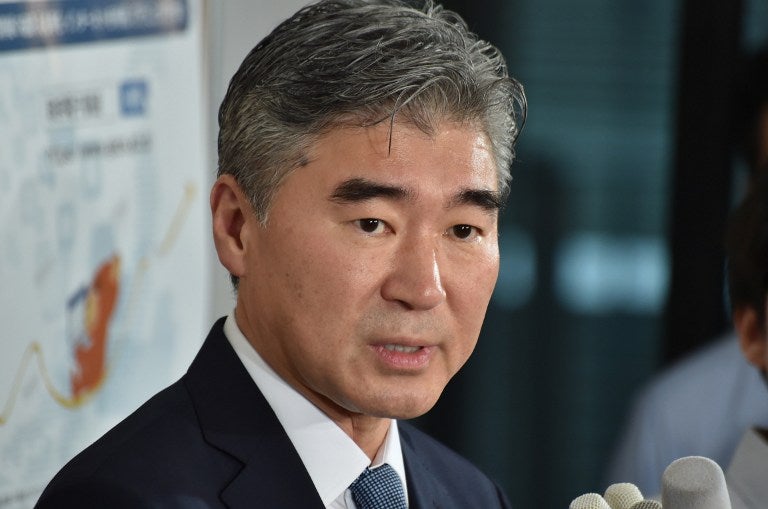 US Ambassador to the Philippines Sung Kim. AFP photo

(LAST UPDATED: 4:45 a.m., Nov. 4, 2016) Korean-American Sung Y. Kim was sworn in Thursday as the new ambassador of the United States to the Philippines.

Kim, former special representative of the United States for North Korea Policy, was nominated by President Barack Obama on May 2016 and confirmed in September.

He replaces Philip Goldberg, who has been the subject of repetitive personal attacks from President Rodrigo Duterte.

State Secretary John Kerry administered the oath of office to Kim in a ceremony in Washington, D.C.

Kerry has maintained that the relationship between the Philippines and the US remains “ironclad” despite President Duterte’s anti-US sentiments.

“The United States continues to place a high value on the close ties that exist between our countries,” he said.

“We continue to recognize our ironclad commitment to the sovereignty, independence, and security of the Philippines. And we will continue to cooperate in efforts to maintain peace and stability, and to promote shared prosperity in the Asia Pacific region.”

Kim’s assignment to Manila comes weeks after President Duterte announced in China the Philippines’ split from the US.

Assistant Secretary for East Asia and Pacific Affairs Daniel Russel went to Manila to seek clarification of the President’s remark.

A report for the US Senate committee on foreign relations made favorable remarks about Kim, saying: “His outstanding managerial skills, open interpersonal style, and ability to work well with numerous US government agencies on sensitive and complex policy issues and priorities, makes him well qualified to serve as US Ambassador to the Philippines.”

Kim, a career member of the US foreign service, served as the US ambassador to the Republic of Korea from 2011 to 2014 and as special envoy, with rank of ambassador, for the Six-Party Talks from 2008 to 2011.

Previously, he was the Political-Military Unit chief at the US Embassy in Seoul from 2002 to 2006, according to a White House news release.

From 1999 to 2002, he served as a political officer in Tokyo. His other overseas assignments included Kuala Lumpur and Hong Kong.

In Washington, DC, Kim worked in the Office of Chinese Affairs and served as staff assistant in the Bureau of East Asian and Pacific Affairs, where he rose to become deputy assistant secretary.

Before joining joining the foreign service, he worked as a public prosecutor in the Los Angeles District Attorney’s office.

Kim was born in Seoul, South Korea, in 1960, the son of a South Korean diplomat. In 1973, he and his family moved to Los Angeles, where he grew up.

A graduate of University of Pennsylvania, Kim took his juris doctor degree at the Loyola University Law School. He earned a master of laws degree from the London School of Economics and Political Science. /atm