President Duterte is urging Malaysia and Indonesia to come together with the Philippines in ending piracy, kidnapping and other criminal activities in the high seas within the sea borders of the three
Southeast Asian countries.

He said he would discuss the matter with Malaysian Prime Minister Najib Razak during his state visit to Kuala Lumpur this week.

“We have a lot to talk to about (like) the piracy on the Malacca Strait. Kidnapping and criminality abound in that area,” the President told reporters in Davao City on Tuesday night.

“Malaysia, Indonesia and the Philippines (must) talk about this and once for all, come up with a solution,” he said. “There’s a need for us… to talk about this seriously and to put a stop to it because it has somehow
paralyzed the trade and commerce in that area.”

The President said he had discussed the matter with Indonesian President Jokowi Widodo during his visit to Jakarta last August.

He said the Indonesian leader agreed that there should be closer security cooperation among the neighboring countries to secure the sea route off Jolo and Tawi-tawi. 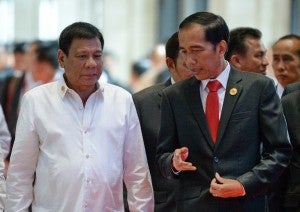 Philippine President Rodrigo Duterte and Indonesian President Jokowi Widodo at the summit of the Association of Southeast Asian Nations (ASEAN) in Laos earlier this year. (AFP)

He also discussed his concern during his meeting with Malaysian Deputy Prime Minister Ahmad Zahid Hamidi in Davao a few days ago.

According to the President, the incidents of piracy and kidnapping involving the terrorist Abu Sayyaf Group had also become a cause of embarrassment for the Philippines.

He said he would also bring up the possibility of conducting joint police and military sea patrols involving the law enforcement agencies of the three countries.

“It’s very important that the arterial channel there will be safe and (for us to) get rid of the troublesome guys,” said Mr. Duterte.  SFM