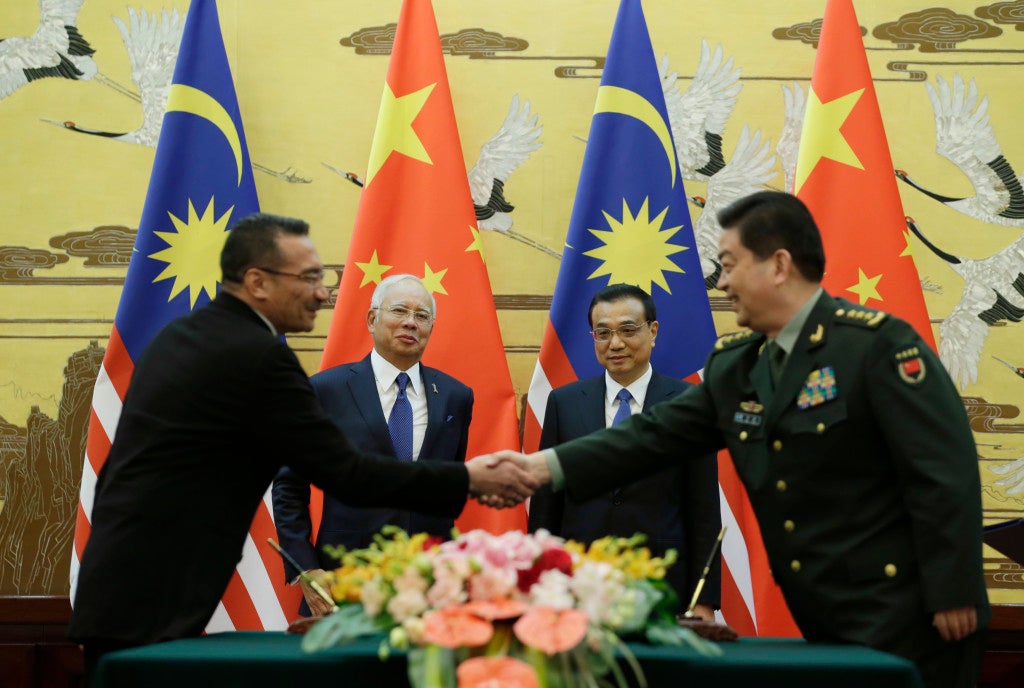 BEIJING—Malaysia has agreed to buy four Chinese naval vessels and pledged with China to handle South China Sea disputes bilaterally, a Chinese official said on Tuesday, in what could be China’s latest counter to US influence in the region.

The vessels are known as littoral mission ships, small craft that operate close to shore. Two will be built in China and two in Malaysia, Malaysian state media reported after a meeting between Chinese Premier Li Keqiang and his visiting counterpart, Prime Minister Najib Razak.

“I call this a landmark decision because before this we have not bought such vessels from China,” Najib later said.

The move marks Malaysia’s first significant defense deal with China at a time of rising tension in the South China Sea.

Malaysia has historically acquired the bulk of its major defense hardware from the United States, Russia and European countries.

“Leaders of the two sides agreed to further advance the proper settlement of the South China Sea issue with dialogue through a bilateral channel,” Chinese Vice Foreign Minister Liu Zhenmin told reporters at Beijing’s Great Hall of the People where Li and Najib met.

“Obviously the launching of naval cooperation between the two sides is significant for our bilateral ties. It’s a reflection of the very high level, mutual political trust between our two countries,” Liu said.

China claims most of the South China Sea as its territory. But Brunei, Malaysia, the Philippines, Taiwan and Vietnam also have rival claims to parts of the waterway, which commands strategic sea lanes that carry some $5 trillion worth of trade a year.

The push to strengthen China ties comes after July lawsuits filed by the US justice department implicating Najib in a money-laundering scandal.

Najib has denied any wrongdoing and said Malaysia would cooperate in the international investigations.

“I think there’s a mischaracterization here. There’s no such thing as using our financial muscle to improve ties,” Liu said in response to a reporter’s question on the issue.

“I believe this visit will bring our bilateral ties to a new high … a historic high,” Najib said prior to meeting with Li.

Asked for details of the defense arrangement, Liu said that the two countries were “focusing on naval cooperation,” adding that the deal “marks a big event in our bilateral ties.”

Although the Philippine leader subsequently backed off, saying their alliance remained intact, the episode underlined China’s increasing diplomatic and economic gravitational pull at the expense of the United States.