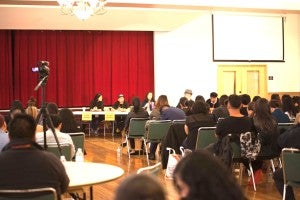 SEATTLE, Washington – More than a hundred Filipino Americans gathered at the Filipino Community Center in this city for the sixth national summit of Pilipino Unity for Progress (UniPro), a young professional and student national organization with chapters in New York, Chicago and San Diego.

With the theme of “Reach,” summit organizers put together a program filled with cultural performances, workshops and keynote speakers from all over the country to educate their members on issues of identity and community empowerment. 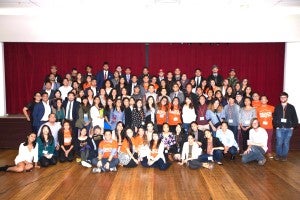 Some of the delegates to the 6th UniPro national summit in Seattle. DONNY ROJO

UniPro was founded in 2009 in New York and seeks to transform its members into community leaders through education, collaboration and advocacy. This year’s summit also served as the launch of the new Seattle UniPro chapter.

The summit’s program was designed to reflect UniPro’s values of collaboration, ingenuity and identity. Local actress and comedian Sarah Porkalob headlined the opening session’s cultural performance, giving a preview portion of her upcoming one-woman show about the influence of her Filipino family on her identity and her struggle for space in a white-dominated industry. Porkalob’s storytelling-style parody seeks to redefine “success” as a woman actress of color. 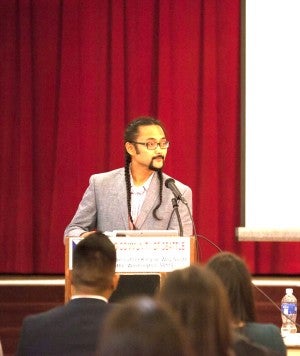 Spoken word artist and oral historian Emily Lawsin followed Porkalob’s performance. Lawsin, born and raised in Seattle, talked about her family history as it related to the building of the Seattle’s Filipino Community Center; she encouraged delegates to document the stories of their elders. Reflecting the summit’s theme, “Reach,” Lawsin said young people have to reach back into the community’s past in order to reach into the future.

While the morning general session focused on identity and intergenerational themes, the workshops focused on another conference goal — reaching out to networks and various communities for the purposes of placing UniPro’s work in the context of larger social issues.

Delegates chose from workshops that drew on lessons and experiences of building coalitions through policy-making, forging ties across racial and ethnic communities on the basis of shared economic and political concerns and supporting people’s efforts for a better life in the Philippines. 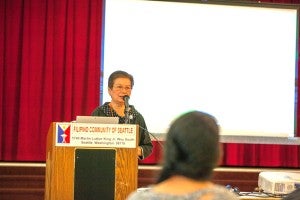 Esther Simpson speaking during “Learning from the Past to Serve the Future – a Workshop About the KDP (Union of Democratic Filipinos).” DONNY ROJO

Domingo related how her work in technology enables “young people to reach high into the future as it allows them to make music and movies, write and access jobs.” Educators echoed the morning speakers call to “reach back into Filipino history,” to learn lessons. Amalag related her own personal effort to understand why she was in this country, before she could reach out to other communities. 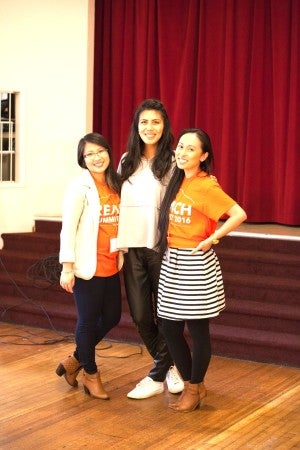 Gossett, an African American civil rights activist, brought a historical perspective by sharing his cross-community work with the “Four Amigos,” four men of Latino, Native American, Asian American and African American descent. Bob Santos, an icon in the Seattle Filipino and Asian American movement and one of the Four Amigos, was supposed to be on the panel but he passed away in September after a short illness.

Psychologist and author, Dr. EJR David closed the summit, speaking on “Reaching to Find Kapwa,” a term meaning “togetherness,” which he defined as the core construct of Filipino psychology. David stressed that in order to be more Filipino, we as a community must understand what it means to be Filipino. 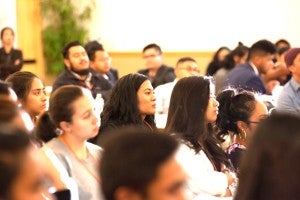 “Kapwa is the core of our pagkatao, our personhood, our humanity,” David stated. “It allows us to see our connectedness and our equality with one another.” Colonialism has caused our community to lose our “kapwa,” separating us from each other, he said. “We must reach within ourselves and rediscover, strengthen and harness our kapwa – our Filipinoness and our humanity.”

UniPro’s Summit 2016 Co-Director Melody Kidd, who lost her voice the night before the summit, posted on UniPro’s Facebook page: “Your energy, your dedication and your support took my voice right out of me. I am forever grateful that y’all took the time out of your busy lives to join us so that we may all grow and reach for progress. It was incredible and humbling to see all the people in one space yesterday. Y’all brought so much joy into my life. I hope each of you left with some new mic-dropping knowledge yesterday.”