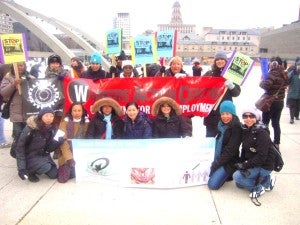 RED DEER, Alberta – A caregiver rights advocacy group has asked the Canadian government to give due consideration to the plight of migrant workers in its planned restructuring of the Temporary Foreign Worker Program by year’s end.

While a House of Commons committee had outlined its recommendations to Ottawa in September for the proposed TFWP revision, Toronto-based Caregivers’ Action Center believes migrant workers and their advocates were given insufficient chance to air their side in the review process.

The review, led by the Standing Committee on Human Resources, Skills and Social Development and the Status of Persons with Disabilities (HUMA), was held from May to June and heard from 50 witnesses from different sectors.

The government will respond to the committee’s report within 120 days to push forward changes to the TFW program.

Caregivers’ Action Center representative Teta Bayan was set to testify before the HUMA review in May but an infamous scuffle at the parliament bumped her out. Needless to say, the group felt the review failed to hear from migrant workers.

“The days when they conducted the review were not the best days for most migrant workers because we were working in tied permits, and taking off during workdays could jeopardize our employment,” said the group in an email interview with INQUIRER.net.

The group argued that the 18 hours allocated by the committee for the review was insufficient. The group sent a detailed outline of their recommendation for the review process to the government, but this too was ignored, the group said.

“Despite the challenges, agriculture workers, temporary foreign workers, a former caregiver and supporters were able to represent the caregiver industry before the HUMA Committee and make excellent recommendations,” the group added.

For Caregivers’ Action Center, the HUMA committee recommendations failed to address the root cause of all migrant workers’ issues in Canada – their temporary status.

According to the group, the recent recommendations didn’t address much of the existing problems of abuse, exploitation, precariousness and family separation experienced by caregivers and migrant workers.

Where there are recommendations for improvement of rights — such as open permits or a path to permanent residence — they are vague, non-specific and do not respond to the concerns migrant workers raised, the group noted.

“Our temporary status makes us vulnerable to exploitation and in most cases, we are left with no choice but to be exploited because Canada’s current immigration laws was designed to allow these evil things to happen to migrant workers,” it said.

A migrant worker’s dream of coming to Canada could easily cost anywhere between $5,000 to $15,000 imposed by recruiters. Recruiter fees also hound migrant workers whose contracts can no longer be renewed but who continue to look for work in Canada.

This practice remains unabated despite government regulations that prohibit it, the group said. The caregivers group has called on the government to formulate an interprovincial federal policy on regulating recruiters.

Recruiter fees appear to be a burden alongside the market test fee of $1,000, the amount paid by employers to the government to hire TFWs. The group observed that many caregivers are asked by recruiters or their employers to pay most of it.

“We are glad that the government has recognized that caregivers should not bear this cost. This is not the only fee, however, that caregivers and other migrant workers are forced to pay,” the group said.

“All too often, migrant workers pay thousands of dollars to recruiters either before entering the country or once they are already here,” the group added.

Despite its observed shortcomings, the advocacy group lauded the committee for recommending the end of the “4 and 4” rule. 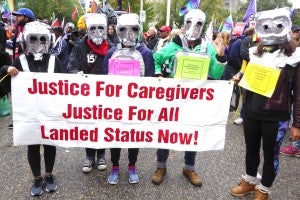 This rule permits migrant workers only four years of cumulative stay in Canada. It spells removal from the country if they fail to obtain permanent status within this period.

“The government must quickly create policies to extend permits for migrant workers reaching the four-year mark today, and give permanent status to those workers that stayed here and became undocumented,” the group said.

Calling this “one giant step (in immigration),” the group urges the government to start by releasing detained migrant workers.

“No migrant workers deserve to be punished inside a cell or get thrown out of Canada like a disposable good which has an expiry date just because they came here in Canada to work a hard job, toiling day and night, caring for elderly with high medical needs, caring for children and at the same time doing all the house work on a minimum wage, hoping that life in Canada will be good,” the group said.

A downward trend in TFW job requests resulted from the major reforms to the program in 2014. Employment and Social Development Canada (ESDC) estimated that a 45-percent decrease in the number of approved TFW jobs occurred in 2015 from 163,035 in 2013 down to 90, 211.