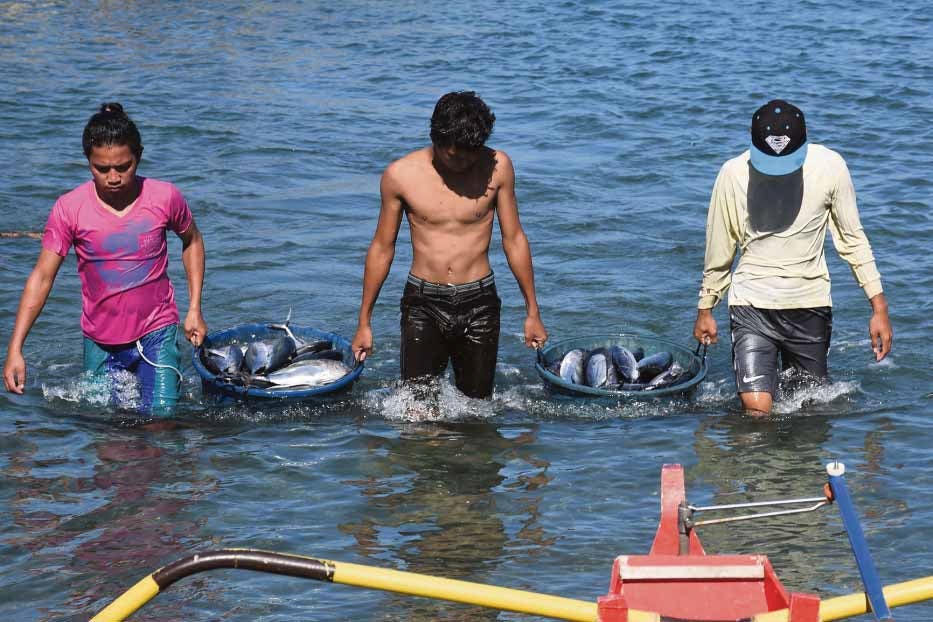 SHOAL HAUL Filipino fishermen fresh from a trip to Panatag Shoal return with their fish harvest. Unlike before when they were driven away by Chinese coast guards, they now tell stories of the Chinese sharing food, liquor and cigarettes with them. —WILLIE LOMIBAO

SUBIC, ZAMBALES—This was unthinkable months back: Chinese coast guards, who used to drive away Filipino fishermen, shared their food and cigarettes with Filipinos fishing at Panatag Shoal last week.

“Chinese Coast Guard vessels approached the boats of our fellow fishermen but only to share their food, liquor and cigarettes,” said Wilson Almadin, 41, crew member of a fishing boat that returned to this town from Panatag on Monday.

Almadin also said other Filipino fishermen shared some of their catch with the Chinese coast guards.

Eight groups of fishermen from Zambales province sailed to Panatag Shoal, internationally known as Scarborough Shoal, on Oct. 26 and found they
could enter the area without interference from the Chinese Coast Guard, which had been blockading the rich fishing ground since 2012.

Almadin belonged to the group of boat captain Ronald Giobalane, 46, which left Subic on Oct. 27 after learning that Filipinos were able to fish near the shoal.

According to Almadin, the Chinese appeared to prove that tensions at the shoal had eased up.

“There are four Chinese Coast Guard vessels still patrolling around the shoal. But they did not seem to mind our presence,” Giobalane told the Inquirer shortly after docking his fishing boat “MB” at the fish port here on Monday.

Fishermen who used to frequent the shoal said the area teemed with different kinds of fish such as talakitok, yellow fin tuna, skipjack, blue marlin and red grouper, which are usually not found elsewhere.

Panatag Shoal is a triangular chain of reefs and rocks surrounding a lagoon. It has a perimeter of 46 kilometers and an area of 150 square kilometers.

The shoal is located 240 km from the coastline of Zambales but China seized it after a two-month standoff with the Philippines in 2012.

The Chinese Coast Guard cordoned off the shoal, driving away Filipino fishermen in spite of a July 12 ruling from the Permanent Court of Arbitration in The Hague that China had no legal basis for its claim to almost all of the South China Sea.

President Duterte discussed the return of Filipino fishermen to the shoal with the Chinese officials during his state visit to China last month.

“Our President has been true to his promise to help us return to the shoal and we’re thankful for that. We’re hoping that Filipinos will no longer fear being harassed by the Chinese Coast Guard,” said Ronald Polo, another fisherman.