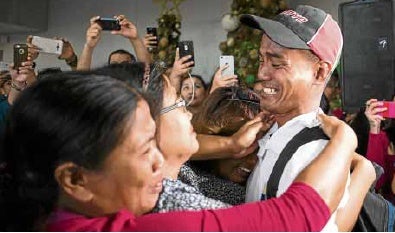 Five Filipino fishermen who had endured beatings and abuse as captives of Somali pirates for nearly five years broke down as they were reunited with their families in Manila on Friday.

The seafarers, among 26 crew members of Naham 3 seized south of the Seychelles in March 2012, cried and laughed as they embraced their loved ones on their arrival a week after they were freed.

“I am so happy. This is what I had been praying for every night: to be with my family this Christmas,” Arnel Balbero, 33, told Agence France Presse.

“Just to be with my family, even if we have nothing, even if we have only little to eat, I am already happy,” he said. His sister, Lilia, trembled at the sight of her brother. “It’s like a miracle. We never lost hope he would be freed,” she said.

The Naham 3’s crew, which also included seafarers from China, Indonesia, Vietnam, Cambodia and Taiwan, was the second longest-held group of hostages taken by Somali pirates.

The Filipinos, most of them from poor farming families, arrived on a flight from Kenya along with four Cambodians.

The captain of their Omani-flagged vessel died during the hijacking and two other crew members succumbed to illness.

Balbero’s cousin and fellow ex-hostage, Elmer, said the Somali pirates had cared little about the health of their captives. “We asked the pirates for medicine but they did not give us any. Instead they said, ‘Where is your money?’” Elmer said.

The former captives also said they suffered beatings at the hands of the pirates.

“In our first week, they called it our introduction. They used bamboo to beat us,” said Arnel Balbero.

Hugging his two teenage daughters, Elmer Balbero, 37, said it was thoughts of seeing his family again that kept him going throughout the ordeal.

“I did not even recognize them,” he said of his children. “When I left they were still so small.”—AFP