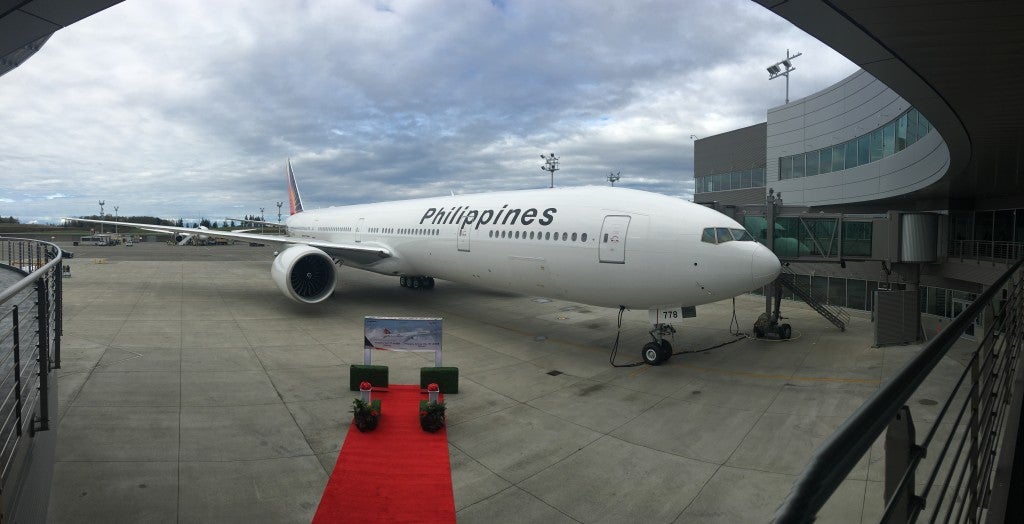 The brand-new Boeing 777-300ER plane of Philippine Airlines sitting at Boeing’s Everett Delivery Center in Seattle for the blessing and delivery ceremony prior to its ferry flight to Manila led by PAL President and Chief Operating Officer Jaime Bautista. Photo by Juliet Javellana

Editors’ Note: A longer version of this story with photos and video was published yesterday. You may read it here:

It is scheduled for its commercial maiden flight to Vancouver and New York on Wednesday, just a few days after arriving, PAL president and chief operating officer Jaime Bautista told the Inquirer.

“I am very pleased, very happy and thrilled to accept delivery of this brand-new 777-300ER to PAL,” Bautista said as PAL took delivery of the airplane at Boeing’s facility on Friday.

The Triple Seven rolled out after a blessing and ribbon-cutting ceremony at the delivery center of Boeing’s 500-hectare Everett Site here.

After the ceremony, Bautista led a 40-member delegation for the 11-hour flight back to Manila. The delegation included members of the media invited to tour the massive facility of Boeing and to join the flight to the Philippines.

The 370-seater—42 of them business class—Triple Seven, already bearing the PAL name and emblem, rolled out of the Paine Field at the Everett Delivery Center at 4 p.m. local time Friday and was due to land at the Ninoy Aquino International Airport around 11 p.m. Saturday.

Prior to the departure, Boeing hosted a dinner for PAL executives and Philippine aviation officials on Thursday night at the Red Barn, where the 100-year-old Boeing first started its operations.

Boeing is the world’s largest aerospace company and leading manufacturer of jetliner, space and defense planes.

“I would like to thank Boeing for this beautiful aircraft and to Intrepid for leasing and financing this aircraft. On behalf of my chairman Dr. Lucio Tan, I look forward to traveling with you on this beautiful airplane. I hope we will have fun on our trip to Manila,” Bautista said.

Bautista also presided over the blessing of the plane and its interiors shortly before the plane was to embark for its flight to its new home.

Bautista said the new plane would service Los Angeles and San Francisco and boost flights in time for the Christmas season.

The aircraft was tested around the Seattle area after its completion at the Everett factory, where a team from the CAAP also completed its inspections, PAL said.