Duterte: Foreign troops out in 2 years 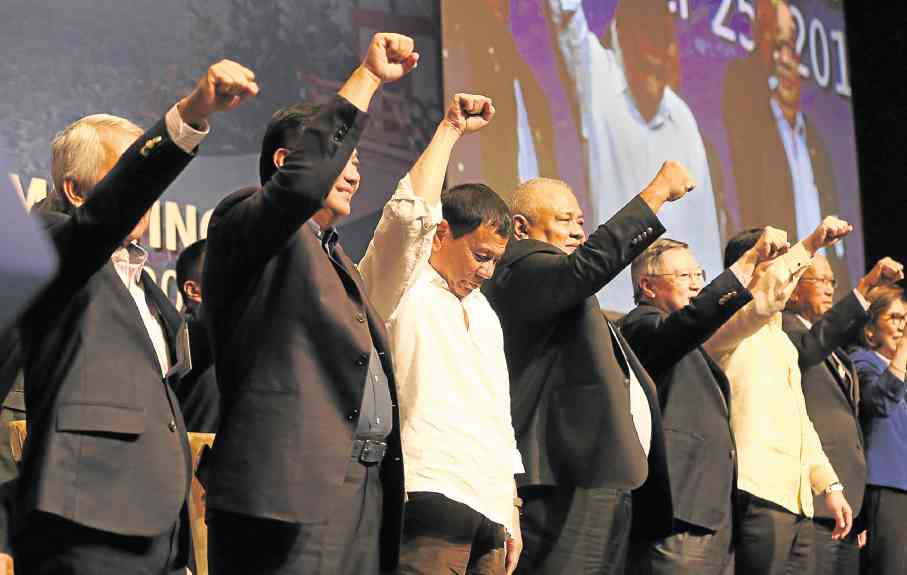 SOLIDARITY GESTURE President Duterte, who is on a three-day official visit to Japan, and his delegation greet members of the Philippine community in Tokyo with raised fists in a gesture of solidarity during a meeting at the Palace Hotel. MALACAÑANG PHOTO

TOKYO—President Duterte on Wednesday said he wanted US troops out of the Philippines, “maybe in the next two years,” and he was willing to scrap defense pacts with longtime ally the United States if necessary.

“I have declared I will pursue an independent foreign policy. I want, maybe in the next two years, my country free of the presence of foreign military troops,” Mr. Duterte, clearly referring to US forces, said in a speech to Japanese businessmen in Tokyo at the start of a three-day official visit to Japan.

Mr. Duterte was referring to about 100 US elite troops advising the Philippine military in counterterrorism operations in Mindanao, and to the Enhanced Defense Cooperation Agreement (Edca) that allows the US military access to five Philippine military bases, including for positioning of warships and planes and storing weapons and equipment.

The Edca was signed by US and Philippine officials in 2014 amid increasingly aggressive incursion by China into the West Philippine Sea, waters within Manila’s 370-kilometer exclusive economic zone in the South China Sea.

Mr. Duterte reiterated that the joint US-Philippine marine landing exercises earlier this month were the last of his six-year presidency.

“Then, in the fullness of God’s time, I am President for six years, no more. I want to be a friend to China,” he said.

Annual joint maneuvers between US and Philippine forces are authorized under the Visiting Forces Agreement (VFA), an offshoot of the Mutual Defense Treaty (MDT) signed by the two countries in 1951.

“Those things I do not need. I just want friendship with everybody,” he added.

Although his Japanese hosts depend on the United States for security, Tokyo has so far not responded to Mr. Duterte’s diatribes, while Washington has taken a calm approach to the Philippine leader’s anti-US rhetoric.

Kirby said Mr. Duterte’s  tirades against the United States were “inexplicably at odds” with the relationship the two countries continued to enjoy.

“We’ve seen this rhetoric and then we’ve seen it walked back,” Kirby told a regular news briefing in Washington. “We’re not going to react and respond to every bit of rhetoric. We’re going to continue to work at this relationship.”

Kirby said the United States would continue to meet its obligations in its defense treaty with the Philippines, adding Washington had not seen Mr. Duterte’s comments against it translate into policy.

Mr. Duterte’s aides frequently attempt to walk back his controversial comments, and Wednesday was no exception.

Foreign Secretary Perfecto Yasay, who is traveling with Mr. Duterte, told a subsequent press briefing that Mr. Duterte did not mean US troops would not be ousted, stressing that “our national interests still continue to converge.”

No breach in treaty

Yasay said, however, that the Philippines was not breaching any obligation under the MDT by stopping joint military exercises with the United States.

The MDT does not require joint exercises, Yasay told reporters, without mentioning the VFA.

He said the context of Mr. Duterte’s statement about stopping joint exercises was that if the joint drills could not meet their objectives, then there was no point in continuing to hold them.

Mr. Duterte has said that only US forces benefit from the joint maneuvers, although he has not been specific.

Yasay said Mr. Duterte had promised to respect treaties signed by the Philippines.

Mr. Duterte has said the Philippines will not sever relations with the United States.

But his declaration of a “separation” from the United States in China last week has caused confusion in Japan, a staunch US ally that hosts 50,000 American troops.

His remarks about his “realignment with China” has added to unease in Japan, which is rowing with China over ownership of five uninhabited islands in the East China Sea.

Seeking to ease those jitters, Mr. Duterte assured the Japanese businessmen that his high-profile visit to China was all about economics.

Mr. Duterte told his Japanese audience that he sought only peace and friendship and that the Philippines’ friendship with Japan would remain intact.

“I give you my word today that we will not abandon Japan in our partnership and security matters, given the common belief that our conflicts and problems with other nations must be resolved peacefully, in accordance with international law,” he said.

The Philippines, he said, would remain a “partner and player” in maritime safety and security.

“We would like to avoid at all costs violence because we have to resolve it peacefully and in accordance with international law. That is my assurance, that in all these endeavors we will be your partner and we will stand by our word,” he said.

Mr. Duterte slammed the United States for criticizing his bloody war on illegal drugs and threatening to cut off aid to the Philippines over human rights violations.

He said the United States viewed him as a dog on a leash—if he would not stop “biting” criminals, Washington would hold back a treat for him.

“That is what America wants me to be. A dog barking for the crumbs of their favor,” he said. —WITH REPORTS FROM THE WIRES